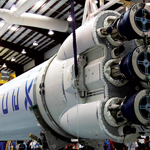 Once the Curiosity rover had settled safely on the Gale Crater of Mars, engineers at Pasadena’s Jet Propulsion Laboratory went nuts—hugging, cheering, and letting out huge sighs of relief. “If anybody has been harboring doubts about the status of U.S. leadership in space, well, there’s a one-ton, automobile-size piece of American ingenuity, and it’s sitting on the surface of Mars right now,” presidential science adviser John Holdren said at a news conference. The doubts were understandable. Aerospace, which had been Southern California’s go-to industry since the 1920s, fell on hard times after the Cold War. Companies consolidated and moved out of town. By the mid-1990s local employment had plummeted. What stayed, though, was brainpower: Southern California has among the largest concentrations of aerospace engineers in the world, and that talent is being put to good use, not only for the ambitious Mars mission but for all sorts of space travel.

With the end of the space shuttle program, and with NASA moving toward advanced exploration of the planets (if Congress approves the money), a privately funded space race is taking shape, focusing on the business of routine orbital transport. Getting much of the attention is SpaceX Corporation, the ten-year-old Hawthorne-based company founded by billionaire Elon Musk—arguably the most admired and written-about entrepreneur since Steve Jobs. Musk’s company has already sent a capsule to the International Space Station as part of a $1.6 billion development deal with NASA. (Another mission to the space station had been scheduled for October.) Musk believes that every kind of transportation—be it satellite launches or travel to other planets—can be done more efficiently and at a lower cost if the government is not in charge. (That’s also the philosophy behind his latest brainstorm: some sort of superspeed people mover that can take passengers from L.A. to San Francisco in 30 minutes. At this point, however, space seems a lot more viable.)

One of the competing companies in the race, Orbital Sciences Corporation, based in Dulles, Virginia, is developing a space vehicle for NASA, while a Nevada company, Sierra Nevada Corporation, is working on a “space plane” that’s designed to ferry as many as seven astronauts to low Earth orbit. Closer to home at least 60 businesses are working on various space ventures in California’s Mojave area, which is near enough to L.A. to attract top talent and far enough to operate inexpensively and out of earshot. The most notable of these, Scaled Composites, was started by test flight legend Burt Rutan and is owned by Northrop Grumman Corporation. Besides Musk, billionaires Paul Allen, Richard Branson, and Jeff Bezos each have a space operation. Branson’s company, Virgin Galactic, has booked 600 people for future passage on something called SpaceShipTwo.

All of this is encouraging news for a local economy that remains in stutter-step mode. SpaceX, short for Space Exploration Technologies, alone has added hundreds of workers over the last year, and it’s posting ads for welders, software engineers, composite production engineers, and robotics designers, among other positions. As of August the workforce stood at 1,800, up from around 200 in 2005, and that number is certain to increase. The company has been leasing as much property as it can in and around its massive Hawthorne factory, formerly the place where Northrop manufactured fuselages for the Boeing 747. At last check nearly 1 million square feet were spoken for. Hawthorne city officials, grateful that so much new business has moved into their struggling working-class city, designated last June “SpaceX Month.”

Contextually the company remains fairly small. In nearby El Segundo, Boeing, Northrop, Raytheon, and Aerospace Corporation eclipse SpaceX with a combined 20,000 employees. Throughout Southern California there are roughly 100,000 aerospace and defense positions—160,000 statewide. But when you assess emerging companies, numbers don’t always tell the tale. Musk has a business model that sets SpaceX apart, not unlike the upstarts in Silicon Valley that veered from Hewlett-Packard and Fairchild Semiconductor. While different doesn’t necessarily mean better, Musk has managed to impress some of the industry’s stodgiest analysts. “The SpaceX saga is an appealing story on many levels,” aerospace consultant Loren Thompson wrote at Forbes.com, because “it demonstrates the dynamism of private enterprise.”

erospace settled here because land was cheap, local universities provided research and testing facilities, numerous military installations were close by, and the region was welcoming to new (and sometimes unorthodox) ideas. “Southern California as we know it would not exist without aerospace,” says Peter Westwick, who studies the industry at the Huntington-USC Institute on California and the West. “This was the road to the middle class for California families. The ranch house, the backyard barbecue, the surfing—they were built on the defense industry.” Along the way were ebbs and flows, depending on who controlled Washington and whether the nation was engaged in conflict. Once the Soviet Union collapsed in 1991, tens of thousands of aerospace and defense jobs in the area were eliminated. Thousands of additional jobs could be lost in 2013 if Congress and the White House remain deadlocked on a budget package and are forced to institute across-the-board cuts.

Because planes, satellites, and all the other aerospace gizmos are so complicated and costly, and because the layers of corporate bureaucracy get so entangled, it’s easy to lose track of the billions of procurement dollars. That’s sort of the idea. Conventionally a customer, usually the government, awards a prime contractor, which in turn works with subcontractors, sub-subcontractors, and lower-level suppliers in preparing the bits and pieces for whatever is being manufactured. (It’s a procedure that goes back to at least World War II, when airplane makers couldn’t handle all the orders and had to hand off work to other companies.) The arrangement has been beneficial to everyone: Congressional lawmakers appropriating the money can spread the wealth and maximize the number of companies (and constituents) that have business, while state and local economies can profit from a well-paid workforce.

Where the system breaks down is in the execution. Having thousands of companies responsible for making the needed parts and services often results in cost overruns and delays. This is what happened with the fleet of space shuttles, which originally were supposed to go up several times a month. “That was always the holy grail of space flight,” says Howard McCurdy, a space policy expert at American University. “The space cadets figured that if you could get the cost of space access down to a reasonable level, then you could start putting up large structures—space stations, lunar bases, Mars factories. That would open up everything.” Unfortunately the vehicle’s balky design, which was partly the result of letting in too many subcontractors, allowed only an average of four-and-a-half missions a year over the program’s 30-year run.

Musk wants to turn the process on its head by keeping up to 80 percent of the manufacturing in-house, a strategy that’s known as vertical integration. In addition, he hopes to fully reuse rockets and other expensive items, something that NASA has never been able to accomplish. That would lower the cost of each flight to a fraction of what the government paid during the shuttle days and make it easier to maintain quality control. “Keep it lean, reduce your mass, and then, once you’ve got a successful product, fly it like hell,” says McCurdy. “It contradicts the big-science philosophy that it takes a lot of checks and balances and a lot of people looking over other people’s shoulders.”

Not only is this a different business philosophy compared with 20 or 30 years ago, but it has created a different culture. Boeing and Northrop have workforces whose average age is close to 50, a reflection of the stepped-up hiring that took place during the Reagan years. These people have never left, which is why the annual attrition rate is in the 1 percent to 2 percent range (companies generally want more turnover—about 5 percent). “They’re in a sort of hunkering-down mode,” says Jan Vogel, executive director of the South Bay Workforce Investment Board, a career placement service. As an example, Northrop was forced to switch to a larger venue for its annual banquet that recognizes workers who have been with the company at least 25 years. By contrast, the average SpaceX employee is in his (or her) midthirties, and some of the hires are right out of graduate school. At the Quiznos a few steps from the SpaceX facility, several employees told me about the fast pace, endless days, and requisite perks (Ping-Pong tables, free frozen desserts) that you’d find at a Bay Area start-up. “We’ve been drinking the Kool-Aid,” says a 26-year-old engineer who has been at the company several months. “We’re working much longer hours than the other plants, but the Space Station was a nice reminder of what we’re planning to do.”

Craig Cooning, vice president and general manager of Boeing’s Space and Intelligence Systems Unit, scoffs at the claim of longer hours. “I get to work every day at 6:45,” he says. Still, Cooning and his managers have had to adjust to a new way of doing business—specifically the emergence of nongovernment customers who are more demanding about prices and deadlines. In the old days “if you won a major government program, it was like hitting a home run,” he says. “It would go on for a long period of time, and there were usually extensions, and it generated a lot of revenue. On the commercial side it’s more like bunts and hits to first base. They’re on a tight time line, and you’re scrambling a lot faster.” Contractors are faced with conflicting agendas: Commercial customers want to keep down costs, and government customers want to be in control. In just the past year Boeing picked up a $460 million NASA contract to develop engines and spacecraft and also received commercial orders for four telecommunications satellites that will be launched into orbit by SpaceX’s 18-story Falcon 9 rockets.

Clearly the privatization movement is here to stay, but the methods have yet to jell. SpaceX and the other newcomers operate less like traditional companies than expensive science projects. Musk, for instance, splits his time between SpaceX in Hawthorne and his electric car venture, Tesla Motors Incorporated, in Northern California. That’s an impossible regimen to sustain long term—one reason Musk says he might form a holding company to oversee both businesses. And how SpaceX would operate if Musk got hit by a truck tomorrow is anyone’s guess; the company is unusually stingy with information, even by the standards of government contractors. I was surprised at the difficulty in obtaining basic facts, such as the year when the headquarters was moved from El Segundo to Hawthorne (it was 2007).

But the biggest concern is not organization. It’s that once the development phase is over and full-scale operations get under way, something will go wrong. This isn’t like starting up a Web site or fashion label—being rocketed into orbit is the most dangerous type of transport, and the stakes will only intensify once manned flights are introduced. When the two shuttles went down in 1986 and 2003, killing everyone onboard, NASA suspended operations for months until investigators were able to determine the cause of the accidents. I suspect the fears that sooner or later somebody will make a mistake are justified. Yet learning curves are part of any successful industry, including precision-demanding ones like semiconductors and medical instruments. Somehow those businesses have managed to make it through the formative years. With so much money on the line and no real alternative for getting objects and people into space, the question is whether these folks will figure it out as well.