Home News An L.A. Neighborhood Is in Turmoil After Residents Place Boulders in an... 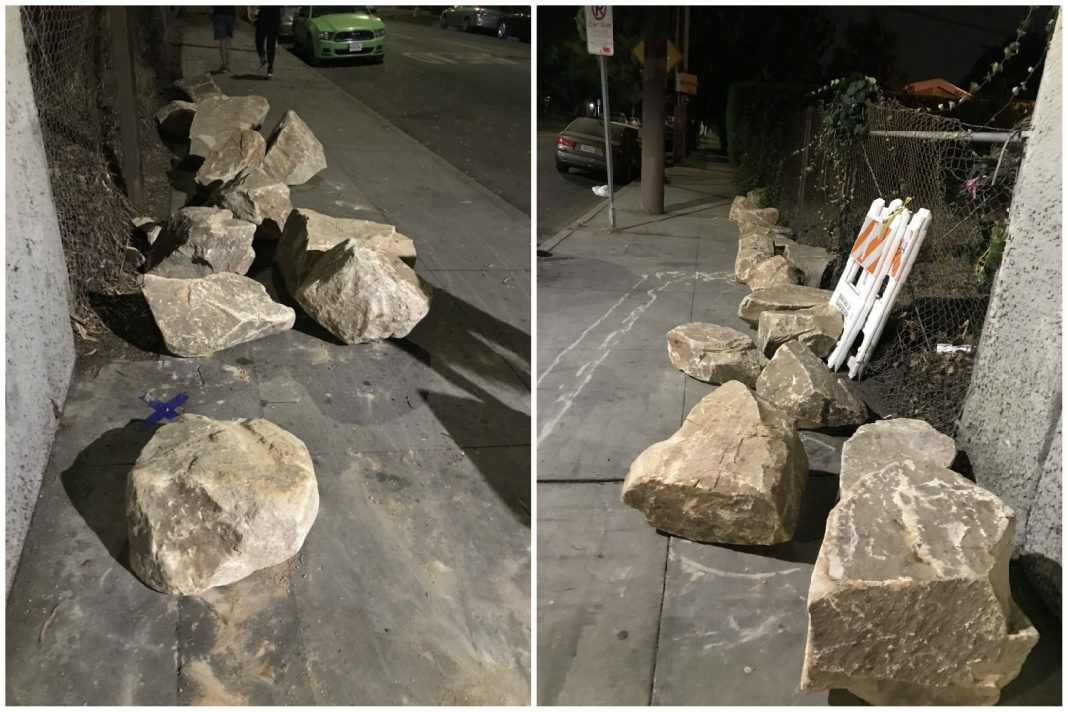 On Sunday, September 6, as record-breaking temperatures scorched the region, a crew got to work placing approximately 60 large rocks along the walls of the Cattaraugus Tunnel, an I-10 freeway underpass that connects L.A.’s Reynier Village neighborhood and the Culver City Arts District. The project was orchestrated by a group of housed neighbors intent on keeping unhoused people from continuing to take refuge in the tunnel.

“The city was not able to do it for us, so we took action,” says W. Peter Iliff, a Hollywood screenwriter who’s lived in Reynier Village for two years. “When an opportunity arose and there was no homeless in the tunnel, we moved very quickly, because we were kind of laying in wait for this opportunity.”

Iliff—who wrote both Point Break and Varsity Blues, and directed Trump’s America, a short film that centers on L.A.’s homelessness crisis—co-organized a GoFundMe that promised to “clean up the tunnel, make it safe, and a beautiful gateway to and from Reynier Village,” and raised upward of $3,600. The GoFundMe has since been taken down.

“This is all about us trying to keep our community from [having] our children have to witness this stuff,” he explains. “The choke point has become dangerous.”

Advocates for the unhoused, as well as some of Iliff’s own neighbors, were outraged by the effort to prevent unhoused people from erecting tents in a rare shady spot during the hottest weekend of the year. The South Robertson Neighborhood Council tells Los Angeles that it wasn’t alerted to the plan before it was executed.

Olga Lexell, who sits on the council’s land use and transportation committees, says she regularly spoke to the unhoused resident’s in the tunnel and never felt unsafe. In her opinion, the boulder placement, which took place outside of any formal neighborhood approval process, needs to be investigated.

“As somebody living in this neighborhood, I want to know that these kinds of processes are being considered democratically,” she says. “If I saw something on the [council] agenda about putting rocks under the freeway during a heat wave so that unhoused people have nowhere to go, I would have attended that meeting. And as a member of the public, I would have spoken out.”

Before Sunday, the tunnel was home to three unhoused people, who some residents say mostly kept to themselves, except when they were visiting with a friendly housed neighbor dropping off goods or local activists checking in. The tunnel’s residents started disappearing a few weeks ago, after two of them were taken away by police officers. When the last unhoused resident had not been spotted in his settlement for a few days, the group of homeowners behind the GoFundMe seized the opportunity to place the rocks.

I am with you. This is wrong on so many levels. My team and I are working on getting these removed ASAP. https://t.co/QROqwG3Eg8

At a South Robertson Neighborhoods Council meeting conducted via Zoom on Tuesday, September 8, more than 60 people called in to voice their disgust with the boulders; only four people who spoke were in favor. On Twitter, Herb J. Wesson Jr., the city councilman who represents the neighborhood, condemned the boulders as “wrong on so many levels” and promised that his office would make sure they were removed.

But as the Tuesday’s council meeting dragged on, activists from the Services Not Sweeps coalition mobilized to do the job themselves, removing about 40 of the boulders from inside the tunnel using rented dollies. They left behind signs condemning the installation, and asking those responsible to consider using the funds spent on the rocks on services for the unhoused.

Rhiana Casterisano, an organizer with the Services Not Sweeps coalition, says that activists believe that the people who placed boulders had help from local government.

“City council is so known for, like, these shady backdoor deals,” Casterisano says. “You really never know what’s going on behind closed doors.”

During a Thursday meeting of the South Robertson Neighborhood’s Executive Council, Iliff said that he had been contacted by law enforcement and threatened with a charge of illegal dumping if the boulders weren’t removed within 24 hours. He claimed that he had received help from the city council office in districts 5 and 10, and that he had spent more of the GoFundMe money on having them removed. On Thursday afternoon, they were spotted being hauled away.

Lexell, who emailed South Robertson Neighborhood Council board members about the rocks when they were first installed, says she received multiple harassing emails and phone calls from people who were in favor of the boulder project. Still, she doesn’t regret speaking up on behalf of her unhoused neighbors.