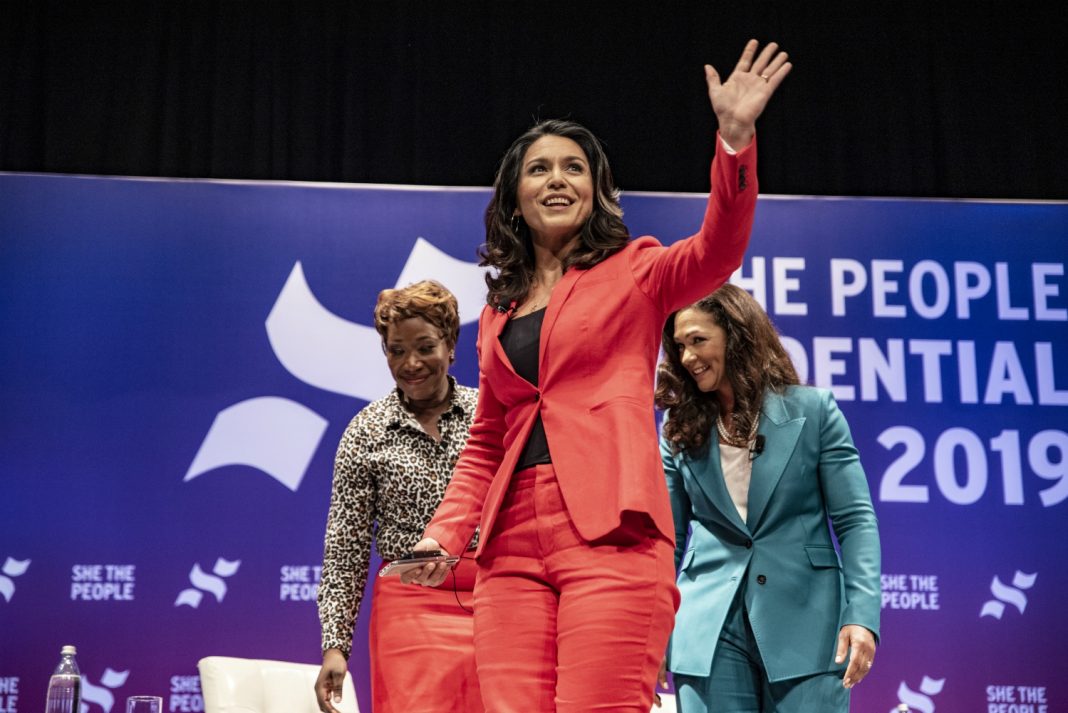 U.S. Representative and presidential hopeful Tulsi Gabbard’s most successful internet fundraiser, political vlogger Niko House, has clapped back at the Huffington Post over a story labeling him “a conspiracy theorist” who believes the Las Vegas mass shooting was a set-up, that Bill Cosby was “framed,” and that “Pizzagate” was a thing.

After House won a lunch with Gabbard by attracting 716 new campaign contributors earlier this month, HuffPo looked into his other online activity and revealed a complicated set of beliefs. In the piece, writer Charles Davis calls House “a prolific conspiracy theorist who argues the mass shooting in Las Vegas was an intelligence operation meant to distract from the Harvey Weinstein scandal.” House was among the speakers at a Tulsi 2020 event on March 30 in L.A., although he’s based in Miami.

Once a progressive firebrand, Gabbard has seen her star dim in recent years. Her unlikely support of using the phrase “radical Islam,” hawkish outlook on terrorism, and off-putting relationship with Syrian dictator Bashar al-Assad alienated early supporters—and that hasn’t been doing her any favors on the campaign trail. Of the 22 Democrats currently running for president, Gabbard is one of 11 with approximately 1 percent voter support, according to the Morning Consult.

But she’s also attracted a motley and fervent group of enthusiasts. (In an unfortunate turn of events, she had to reject the endorsement of former KKK grand wizard David Duke.) As the Huffington Post put it, “Gabbard, while struggling to register in most polls, has attracted a good deal of support from the fringe of both the left and right, especially online…The campaign has…embraced some of its lesser-hinged fans.” House among them, point being.

Having reviewed the dizzying array of videos linked in the article, it might be more fair to call House a “conflate-ist” than a conspiracy theorist. While he makes a reasonable, albeit rambling, case that Hillary Clinton and the DNC stole North Carolina from Bernie Sanders in 2016, he makes other cases as well. For instance, he doesn’t quite say that the Vegas murders were a Weinstein cover-up. Instead, he seems frustrated that many different things seem to happen all at once.

In one video, House wonders why a security guard who witnessed the shootings appeared on Ellen DeGeneres’s talk show—as did anyone who was following the case. But then he points out that many news events are happening “at the same time.” He connects the killings to internet rumors that the CEO of Mandalay Bay’s parent company sold “90 percent” of his stock “three weeks” before the shooting. He argues that the average person wouldn’t question media coverage of the murders “because they’re so distracted by Harvey Weinstein, by pedo-gate Hollywood…”

“When you start seeing patterns,” House says, “you’ve got to start asking questions.”

House comes off far worse when discussing the Cosby case, criss-crossing his bid to buy NBC with his rape conviction, among other things. “The first time he tried it, his son was randomly killed by the side of the highway. The next time he tried it, this happened.”

He also sees a matrix behind the fact that attorney Lisa Bloom—“a staunch Hillary supporter”—represented both Harvey Weinstein and some of Cosby’s accusers. “Do you think she knew about all the sexual assault Harvey committed?” he asks. “Probably.” He then adds that Bloom “worked to create a panel of women who all accused Bill Cosby of sexual assault.”

As for Pizzagate, House does say that the language used in hacked Clinton campaign emails, “just so happens to be code for pedophilia and human trafficking.”

One statement attributed to House in the HuffPo story is not linked to, however. It concerns accusations that Tulsi is a supporter of Syrian dictator al-Assad, an allegation that the Rep hotly denies: “Gabbard, House said, is the only Democrat ‘saying that Assad is innocent.’”

Three days before House’s online fundraising success was announced on May 16, Tulsi appeared on The Joe Rogan Experience, a favorite of House’s.

Addressing her alleged support of al-Assad, Rogan asked, “Is that one of those things people just say in order to defuse you, in order to categorize you as a ridiculous person right off the bat where no one can take anything else you say seriously?”

“It’s the usual tactic of trying to smear or vilify me and my campaign, and what I am advocating for,” Tulsi said.

In his October, 2017 video on the Vegas massacre, House summed up his problem with the mainstream media: “They know we’re distracted by things we can’t do anything about.”

RELATED: Andrew Yang Probably Isn’t Who You Think He Is

10 Things that Made 2020 a Little Less Terrible