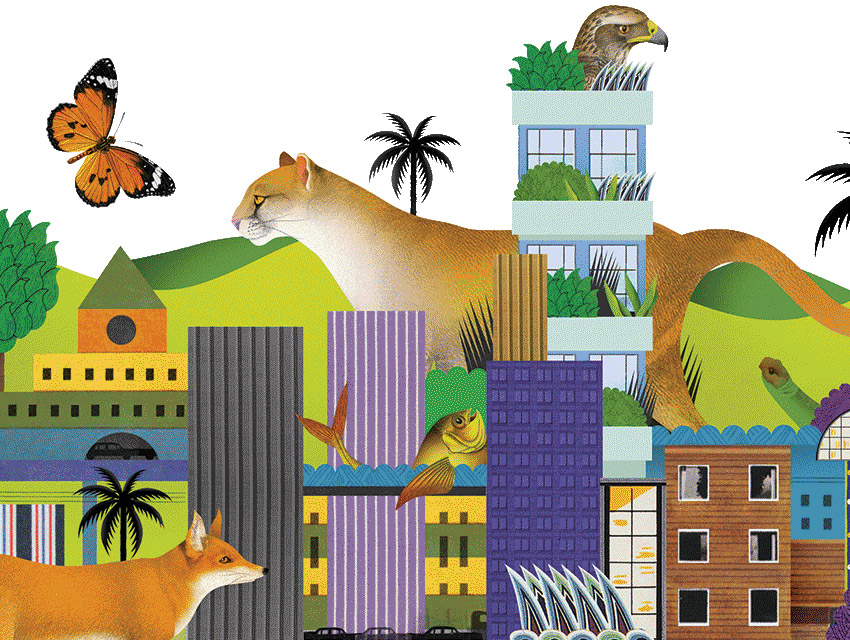 Shifting migration patterns and diminishing natural resources have resulted in an increase of area wildlife forging treacherous paths through L.A. Short of persuading them to stay put, conservationists are hoping to provide them safer routes.

By Land
In 2012, mountain lion P22 succeeded in crossing the 405 and 101 freeways to get from one side of the Santa Monica Mountains to his current Griffith Park bachelor pad. Others weren’t as lucky: This past year three cougar kittens were killed by vehicles while attempting to cross. Right now the only alternative to jaywalking the freeway is a concrete equestrian tunnel in Simi Valley that links animals south of the Ronald Reagan Freeway to Rocky Peak Park to the north. But the National Wildlife Federation is raising funds for what could be the largest wildlife crossing in the world—a bridge spanning ten lanes over the 101 in Agoura Hills. Construction is expected to start in 2018.

By Water
Roads, dams, and culverts make swimming upstream practically impossible for the already-rare steelhead trout, tidewater goby, pond turtle, and other native aquatic life. The California Department of Fish and Wildlife has counted nearly 4,000 of these man-made obstacles in the state; there may be more. The agency is lending the creatures some extra muscle by funding barrier-removal projects up and down the coast. In addition, two roads that cut through the streambed at Malibu’s Arroyo Sequit Creek are being replaced this summer with bridges, which should assist our water-bound friends in swimming unimpeded.

By Air
Every fall monarch butterflies head south from the United States and Canada to Mexico, with herbicide-filled farmland and dwindling native vegetation as their primary food supply. These undesirable conditions may explain why monarch populations have plummeted 90 percent in approximately 20 years. To slow their decline, the NWF has recruited Certified Wildlife Habitat gardeners, home owners along the flight path who have volunteered to plant butterfly-safe shrubs to attract the insects. There’s another benefit: A UCLA study found that these gardens suppress more of the greenhouse gas CO2 than traditional plants, which can help offset climate change.

This Conservation Expert Is Keeping L.A. Connected to Nature

A Wildlife Bridge Over the 101 Moves Forward