Home Sports A Look Back at the Long, Winding Road to the Opening of... 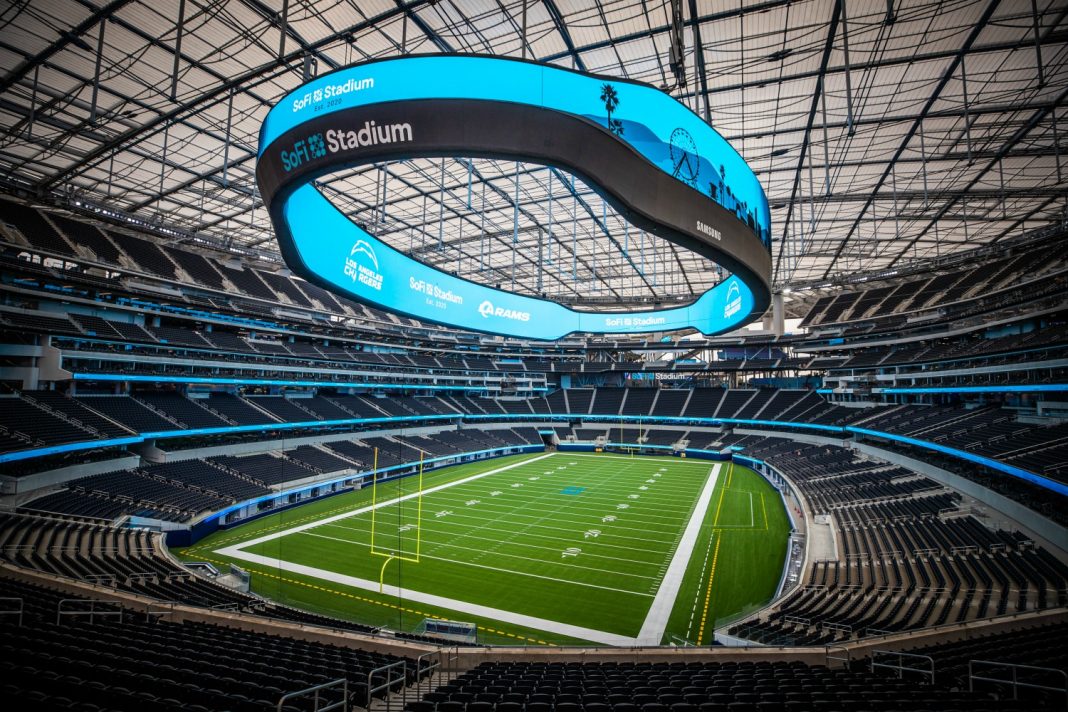 The energy at the event—part press conference, part pep rally—was palpable. The mayor was there, invigorating a crowd of Los Angeles’ political and business elite. The line of speakers, strategically positioned so that TV cameras would capture the football field behind them, breathlessly described plans for a modern, bells-and-whistles stadium. Even a marching band was on hand to herald the effort to bring the NFL back to Los Angeles after a lengthy absence.

In the moment it was a marker of excitement and progress, but in the eyes of history, it would prove to be nothing more than a fleeting wink. The matching T-shirts that Mayor Antonio Villaraigosa and other attendees wore at the 2006 event blared “LOS ANGELES 2010,” a reference to the dream to return professional football to the L.A. Memorial Coliseum by that date. Yet the anticipated $800 million reimagining of the historic Exposition Park venue would never come to fruition. Instead, it would be 14 more years until Angelenos would get their pigskin palace.

In football parlance, the Coliseum play was an incomplete pass. It was just one of many local pro football efforts that failed to reach the end zone.

This weekend marks the debut of SoFi Stadium, with the Rams scheduled to kick off their season on Sunday evening against the Dallas Cowboys in the glistening Inglewood complex with a reported $5 billion price tag. It’s a momentous achievement, and ushers in a new era for sports in the region. But getting here required taking more hard knocks than occurs during any Sunday afternoon game.

It’s been 26 years since Los Angeles last had a permanent location for professional football. The Rams and Raiders both left town after the 1994 season, the former fleeing to St. Louis, the latter drifting north to Oakland (and this year on to Las Vegas). At the time no one expected the second largest city in the country, and the hub of the entertainment industry, to be without the nation’s most popular sport for more than a few years. Instead, an entire generation grew up without a home team.

The failed attempts lasted until the day in 2015 when Rams owner Stan Kroenke announced plans to construct a stadium on nearly 300 acres that he had quietly purchased in Inglewood. Construction started the following year, and the Rams began playing in the Coliseum, sharing the field with the USC Trojans. In 2017 the San Diego Chargers announced they would join the Rams in Inglewood, and took up residence in the pint-sized (for a football stadium) Dignity Health Sports Park in Carson.

The decades without football led to the shattering not only of many developers’ dreams, but to numerous long-held beliefs; in the early years so-called experts opined that the NFL needed a team in L.A. to ensure high TV ratings, and that the city wouldn’t stand to be without the NFL. Yet the league would have no problem securing ever-more-lucrative broadcast deals, and while many Angelenos wanted a team, it turned out that football wasn’t essential to civic identity, and people had plenty of other things to do on a sunny Sunday SoCal afternoon. Additionally, local leaders sniffed at the concept of kicking in public money to help a billionaire owner build a stadium.

In 1994, no one expected the second largest city in the country to be without an NFL franchise for more than a few years. Instead, an entire generation grew up without a home team.

There were plenty of efforts, as well as some collateral damage. The first attempt came shortly after the Rams and Raiders departed, when Dodgers owner Peter O’Malley proposed building an NFL stadium in the Dodger Stadium parking lot. The idea generated enthusiasm and City Hall support. Yet there was a competing effort to bring football to the Coliseum, and according to an ESPN article, then-Mayor Richard Riordan played politics and yanked his Dodger Stadium backing. Media reports said this helped prompt an angry O’Malley to sell the Dodgers a few years later.

More failures would follow. In the late ’90s the city sought to win an expansion franchise from the league—super-agent Mike Ovitz and billionaire philanthropist Eli Broad were involved with competing efforts—but fell short when Houston energy magnate Robert McNair agreed to pay an astonishing $700 million for the rights to a team. That didn’t even include the cost of building a stadium.

The 2000s were peppered by an assortment of tries all over the region. Plans were broached for stadiums in places including the Rose Bowl, the City of Industry, the city of Commerce, Anaheim, the Coliseum (several times) and multiple spots in downtown L.A.

At the same time, the NFL seized upon a sort of wicked game: when the owner of a small-market team wanted a new stadium full of revenue-generating luxury suites and club seats, reports would be floated about potentially moving the franchise to Los Angeles. Thus, L.A. became unwitting bogeyman, and time and again leaders in lesser cities would agree to perhaps foolish deals to help finance a new stadium if that meant holding on to their team. Over the years at least nine teams were mentioned as candidates to land in Los Angeles; in addition to the Rams, Raiders, and Chargers, the squads dangled were the Minnesota Vikings, Seattle Seahawks, Indianapolis Colts, New Orleans Saints, Jacksonville Jaguars, and Buffalo Bills.

It’s impossible to know if league brass ever seriously entertained the idea of an outsider controlling a Los Angeles stadium—after all, it took Kroenke, who owned a team, to bring the league back to town. Still, one effort seemed to have real momentum.

That was Farmers Field, a $1.4 billion vision that emerged in 2010. The play for the 68,000-seat stadium adjacent to the Convention Center was monumental: Tim Leiweke, then the president and CEO of Anschutz Entertainment Group, which owned Staples Center and L.A. Live, touted the project at numerous community meetings and press events, and spearheaded an environmental impact report that ran 10,000 pages (the city approved it in 2012). Phil Anschutz, the media-averse company owner, reportedly spent more than $50 million on the project. There was even a naming-rights deal—for a nonexistent stadium.

Yet the NFL never signed on. Over time momentum slowed, and in March 2015 AEG announced it was no longer discussing the project with the league. Farmers Field was dead, and a few months later Kroenke’s vision emerged.

Now, more than a quarter century after discussions to bring football back to Los Angeles began, a glimmering new stadium is here. Yet in a vicious twist, the game will happen without a crowd. Due to the coronavirus, the Rams will play in front of empty stands, and so will the Chargers during their first home game on September 20.

For long-suffering fans, the wait to see their team in person, in a new stadium, continues.

RELATED: Dodger Stadium Will Be the First MLB Ballpark to Become a Polling Place