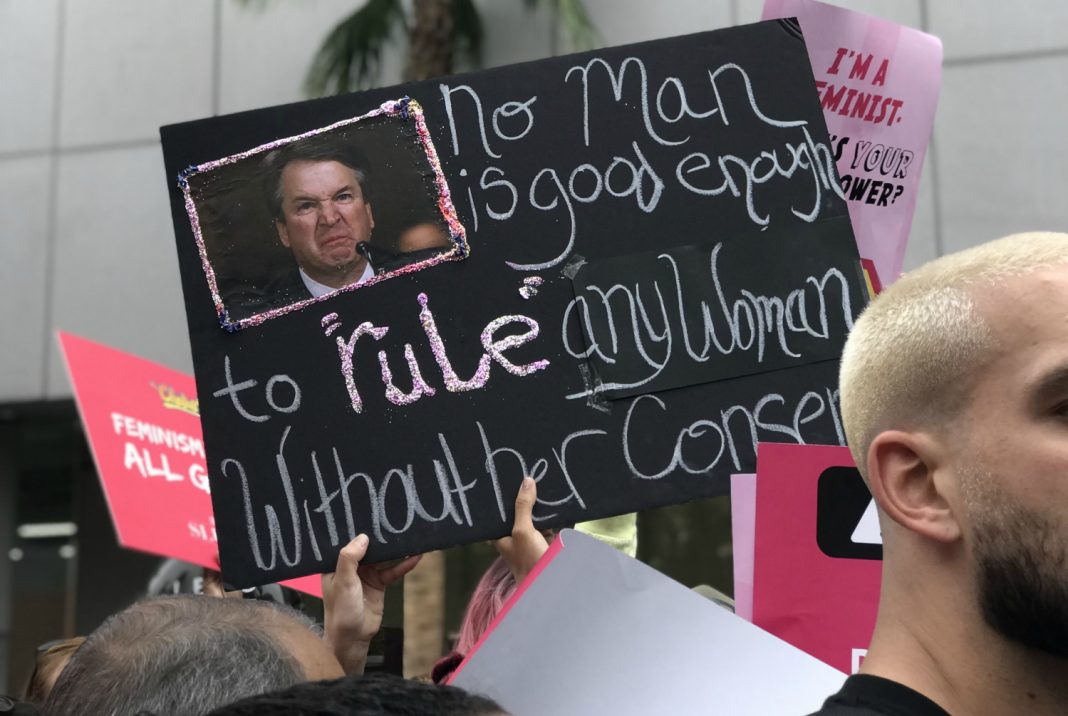 Just as prevention specialist Nooshin Valizadeh (or Dr. V) took the stage at Amber Rose’s SlutWalk in Pershing Square on Saturday to say “Anita Hill and Dr. Christine Blasey Ford, we believe you,” a push notification was sent announcing Brett Kavanaugh’s confirmation as the newest Supreme Court Justice. But the news that a man who’s faced multiple sexual misconduct allegations was just sworn into the highest judicial order in the U.S. didn’t stop anyone at SlutWalk from dancing, celebrating their bodies, and empowering one another.

Despite the terrible news about #KavanughConfirmed I am so thankful @DaRealAmberRose had @slutwalk_la and that I was able to speak and perform to thousands on solidarity and social change. #WeBelieveSurvivors pic.twitter.com/8aYGgzA982

Hundreds of women, children, and men turned out to march alongside Rose, for her fourth annual SlutWalk in downtown Los Angeles, aimed toward taking a stand against slut-shaming, sexual abuse, domestic violence, rape culture, and more. Earlier that morning, Rose greeted the eager crowd saying, “Just ’cause I show my legs, doesn’t mean I’ll spread them.” Wearing a white wedding getup, Rose led hundreds down to the main event at Pershing Square, rocking a sign that read, “Wife a slut. We’re more fun.”

The all-inclusive space wasn’t just intended to entertain and empower, but also to educate. Aside from Instagram traps like floral backdrops or poles to dance on, SlutWalk also included booths where people could register to vote, take advantage of free services like STD testing and rape counseling, and participate in the Clothesline Project to shed light on the issue of violence against women, men and children.

“I feel like my SlutWalk is sexually liberating, body positive and we’re fighting back,” Rose told E! News on Saturday. “We’re allowed to be sexy. We’re allowed to dress how we want. It’s not an invitation to touch us inappropriately…we’re just not taking any shit anymore. It’s done. It’s over.”

The sea of signs at SlutWalk addressed everything from the importance of consent, personal stories and affirmations from survivors of sexual abuse, messages of support for Anita Hill and Dr. Christine Blasey Ford, and a call to end rape culture and victim blaming.

We spoke to women at SlutWalk about their own stories of survivorship, words of empowerment to women who have yet to speak up about their experiences, and the many other reasons they marched alongside Rose.

“[Slut Walk] empowers women, it gives us the power to come out here and not be ashamed of our bodies, of the way that we feel, and things that have happened in the past. That we shouldn’t be ashamed of anything that we do, or how we dress, or what we have to say. It’s my first walk and I’m very excited and happy to be here because with everything going on right now, I feel that I’ve always been quiet and here, I can express my voice and my opinion, and no one can judge me by the way I look, by what I say, or by what’s on my poster [“I’m a survivor. I was 8, I didn’t ask for it!”]. And to support other women like myself, who are survivors who don’t ask to get raped.

We have the power, we have our voices. You should let other people know what has happened to you because it brings so much closure within yourself, because there’s so many of us that are still fighting and that can’t share their stories because we might be ashamed of what our families might think. Being Latinos, it’s a hush-hush situation that you can’t talk about, but just try or look for help somewhere you can open up.”

“I’m a stripper, so I’m representing for sex workers. Live your life how you want to.”

“[Amber Rose] creates a safe space for women who have been abused and raped. I was raped when I was 9 and there’s a lot of sick things behind rape culture that just need to stop and women have the right to be exactly the way that they want to be. There’s no wrong or right way to be a woman and it’s about Amber Rose just saying, ‘No, a woman can be exactly what she wants to be.’ That’s why I’m here representing.

[Sexual assault] is one of those things that if you choose to try to ignore it or bury it down deep inside of you, it will manifest in one way or another. There is no such thing as burying sexual trauma, it finds a way to seep out, so to come here, in a safe space, where everyone is loving and everyone will embrace you and be kind, is the biggest thing. So if you’re scared, rightfully so, but speaking on it only makes it better.”

“What brings me out here is the fact that men think, and a lot of people think, that it’s OK to slut-shame women for having sex with a certain amount of people, and men get praised for it, which is disgusting. If I want to have sex with anybody, I will and if you do too, then OK and if you don’t want to, that’s fine; I respect your choice but also respect mine. It’s just ridiculous, too, how women are blamed for getting raped [or sexually assaulted] based on what they wear, and it’s not even like that. I can be naked in bed next to you, and if I say no, then it’s no. It’s that simple.”

“I have a 13-year-old son and it’s really important for me to empower women and to teach him the difference between right and wrong. That’s why I’m here.”

“….As a survivor myself, it’s empowering to stand by [other] strong women who have endured an experience like my own. Just as I know I’m not alone, I want other victims to know that they’re not alone as well and have a voice to be heard. For years, I was silent about my assaults—when I was a high school student, my own best friend told me to keep quiet. Today, I want women to know they are never at fault for their attacker’s actions against them and have every right to speak out. That women can be sexually liberated without their sexual freedom being used against them. We, as women, should be able to walk safely through the streets, day or night, without the fear of being attacked.”

“It means a lot to me to be in this space because I was raped before, and I would tell [other survivors] to stay strong and to be there for yourself. At the end of the day, you can do it all by yourself. You just have to be positive and believe that you’re going to help people, the way that I hope I’m helping people.”

“It means more than you would think being here, because being here makes me feel very emotional knowing that these people are actually speaking up about what they’ve been through. And when Muva (Amber Rose) comes up, she says something and everyone is just cheering, it’s like you know they feel they’re supported and not like the world is against them; you feel the unity here at SlutWalk.”

RELATED: How to Have Opinions Without Offending Anyone: A Guide for Women