Home Architecture Slide Show: The U.S. Bank Tower Is Getting an Upgrade 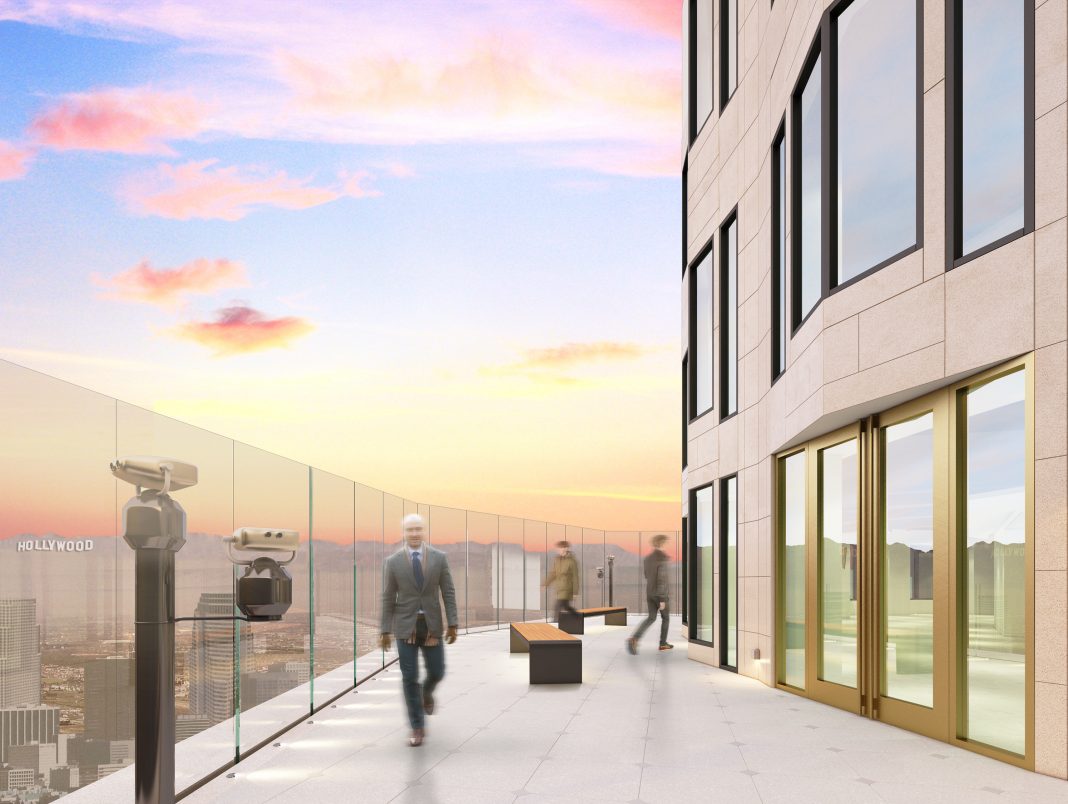 Not to be entirely outdone by the upcoming Wilshire Grand Tower, the U.S. Bank Tower is getting a $50 million renovation. The skyscraper’s new owner, Overseas Union Enterprises Ltd., who bought the building in 2013, is bringing in architecture firm extraordinaire Gensler for the job. The biggest addition is OUE Skyspace LA—an indoor-outdoor observation deck on the 70th floor that will boast 360-degree views from 1,000 feet above downtown. It will be California’s tallest open-air observation deck, for the time being, and will be managed by Legends, the same firm responsible for the observatory at the top of the One World Trade Center in NYC. The 71st floor of the tower will house chef Vartan Abgaryan’s new restaurant and the 72nd, topmost floor will, boringly, remain office space.

A major feature of the renovation will be the installation of interactive technology exhibits inside the new observation deck.

“To name a few,” OUE chief operating officer Lucy Rumantir wrote in an email, “the experience will feature a virtual 360-degree topography wall showing various points of interest around Los Angeles, an infinity mirror that creates the illusion that the viewer is looking down the core of the building, and a shadow wall, which creates reflective images based on your body’s movement.”

The 70th floor isn’t the only part of the tower getting a facelift. The lobby of the building will also see a major overhaul, according to Rumantir. They’ll be ditching the lobby’s constricting, East Coast-ish façade in favor of a more open, all-glass front that is better suited to the SoCal climate. And the lobby’s flashiest new feature: the nation’s largest (i.e. 126 feet by 17 feet) hi-resolution digital art wall, which will span the entire space and will be visible from the street outside. The display will respond to the real-time environment, delivering a swath of shifting imagery controlled by an intelligent sensory-based algorithm.

“The digital art wall will offer glimpses of the culture, community, and people that make Los Angeles unlike any other city in the world,” Rumantir wrote. So maybe a montage of all the establishing shots of L.A. locales in True Detective? Or perhaps a loop of Kahlil Joseph’s ode-to-Compton-via-video-diptych, m.A.A.d? Only time will tell.

Skyspace LA is set to open in 2016, and admission will be $25. Group and special event reservations can be made at Skyspace-LA.com.

CityDig: How the U.S. Bank Tower Was Almost Targeted on 9/11

Scene It Before: The U.S. Bank Tower from Independence Day