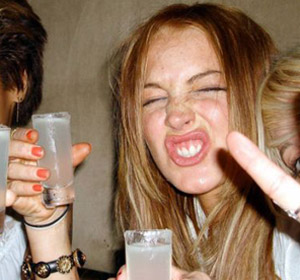 Following in the well- and high-heeled footsteps of fellow starlets Paris Hilton and Nicole Richie, Lindsay Lohan was handcuffed and taken to the Century Regional Detention Center in Lynwood this morning to serve her 90-day jail sentence for probation violations. And just like Hilton and Richie, Lilo is only expected to serve a fraction of her term in the two socialites’ former digs—as little as 23 days.

Will Lohan, who scribbled“f**k U” on her nail during her violation hearing, take jail time more seriously than she did her probation? Will she undergo the same “spiritual awakening” that Hilton claimed to experience while in the slammer? Will she “learn about taking responsibility and being an adult” like Nicole Richie did?

Not according to her Twitter. The actress, who was reportedly showered with confetti on her way to court this morning by one lone fan, tweeted last night, “the only “bookings” that i’m familiar with are Disney Films, never thought that i’d be “booking” into Jail… eeeks.” [sic]

Eeeks?! Well, I suppose so. But Lohan could have taken a cue from former jailbird Martha Stewart, who in less than Twitter’s allotted 140 characters said, “I would like to thank all of the people who have supported me and stood by my company during this awful and uncertain time” (and who also aimed to be “back to work before spring planting season”).  Alas, it’s just not the Lilo way.

Want to know where Shawn Chapman Holley, Lohan’s on-again off-again lawyer, will be hanging out while the starlet’s behind bars? Click here.

[UPDATE: According to the Los Angeles Times, Lohan is expected to be released on August 1st or 2nd, after spending only two weeks in jail. A spokeman from the Sheriff’s Department confirmed that Lilo’s sentence could be reduced to 51 days for good behavior, though she’s likely to serve only 25% of her term because of overcrowding, bringing the final figure to an underwhelming 13 or 14 days.]