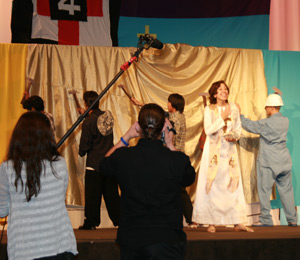 On Thursday the students of the Echo Park Film Center screened their all-singing, all-dancing take on the life of pioneering female evangelist Aimee Semple McPherson. The petite theater was packed with cast and crew and those curious about the colorful preacher who built the landmark Angelus Temple just a couple blocks from the theater. No less than six actors of varying age, race and gender portrayed the colorful McPherson in a 40-minute rollicking revue described by one audience member as a “Sunday School film,” but it was so much… more. The dreamy psychedelic underwater sequence, the boxing gorilla, a puppet band…A more accurate description would place it somewhere between Todd Haynes, David Lynch, Wes Anderson and the Kids of Widney High. The homage was shot on location at the 1923 temple and sisters’ adjacent home, which is now a museum and shrine to the beloved preacher. The DVD is available through the film center. It must be seen to be believed.