Home Lawsuits Homeless People’s Right to Sleep on Sidewalks Could Soon be Challenged in... 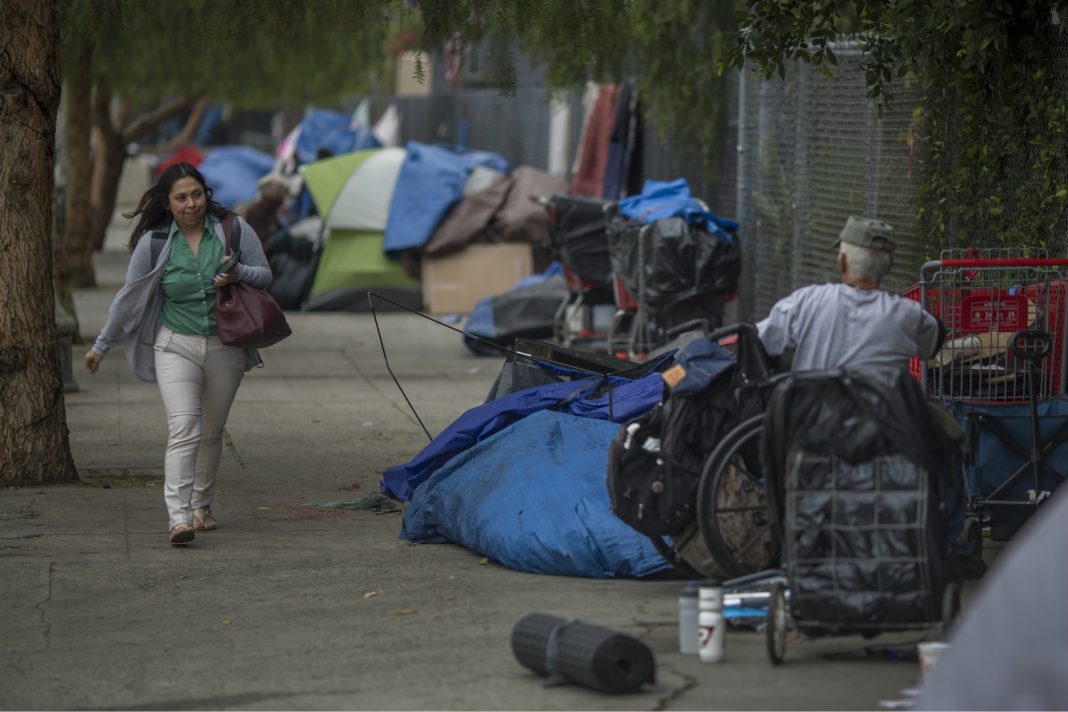 Home to about 900 unhoused people, most of whom are sheltered, the small city of Boise, Idaho, might seem like an unlikely place to spur a national debate about where homeless people should be allowed to sleep. But that’s exactly what happened last year, when a panel of judges ruled that it was unconstitutional for officials in the city to punish people for bedding down on the sidewalk if adequate shelter wasn’t provided.

The result of a decade-long legal battle that started when seven homeless people were cited for publicly camping in the Idaho city, the Martin v. Boise decision sent cities across the West scrambling to determine how they would come into compliance with the law, while managing the growing homelessness crises in their own regions.

It reverberated particularly hard in L.A., which has an unsheltered homeless population of approximately 44,000, and has seen increased frustration among some residents about visible encampments.

In September, protests broke out at Los Angeles city hall when officials proposed an ordinance that would have brought the city into compliance with Boise, but would have banned homeless individuals from occupying space on the sidewalks in large swaths of the city. Homeless advocates said that the ban was contrary to the original purpose of the Boise decision, and argued that it would only increase criminalization among an already vulnerable population. After a heated council discussion, the proposal was shelved.

Now, the Martin v. Boise case could be heading to the highest court in the nation, once again raising questions about where homeless people have the right to sleep when they have no other option. In August, the city of Boise filed a writ of certiorari asking the Supreme Court to hear the case. This spurred a flood of amicus—or “friend-of-the-court”—briefs from dozens of other impacted municipalities, including Los Angeles, that wanted to see the ruling revised.

City Attorney Mike Feuer says that while he agrees that individuals with no option shouldn’t be punished for sleeping outside, he feels the original decision is too broad. He says it raises questions about how the city could monitor the ever-changing number of homeless people and then contrast it with the number of shelter beds available, and whether L.A. will be able to enforce rules about people sleeping near sensitive areas like schools or new shelters.

Feuer fears that answering these questions through city-level litigation will be costly, and hopes a Supreme Court ruling would offer clarity.

“I know there are advocates who say people have a right to sleep anywhere they darn well please,” says Feuer. “I disagree with that. I think that it’s appropriate to have rules in the city that say, for example, people shouldn’t be on the street next to a school. I think Boise may allow that, but the opinion is not clear.”

Currently, Los Angeles Municipal code 41.18 makes it illegal for homeless people to sit, sleep, or lie on public sidewalks anywhere in the city, but the law has faced many other legal challenges, and is only sporadically enforced. Advocates for the homeless have called for a total repeal of the ordinance, and assert that the Boise opinion should be upheld to assure much-needed protections for unhoused people stay in place.

Echoing the Boise decision, they maintain that ticketing and arresting people for simply existing on the sidewalk amounts to cruel and unusual punishment.

“Without [the Boise ruling], cities, counties, and other municipalities can fall back on strategies of criminalization,” says Mike Dickerson, an organizer for the advocacy group Ktown for All. “There’s something really disingenuous in the claim that we need to overturn this to have more tools in our toolkit, because really the only tool that Martin v. Boise is preventing us from using is more policing and more criminalization. If anything, being forced out of using police should be putting more pressure on local politicians and residents to support housing and shelter as a real and humane solution to this crisis.”

On Friday, the Supreme Court is expected to decide whether to take the Martin v. Boise case. Feuer says that there is a good chance it will be accepted, given the number of amicus briefs that have been filed. If that happens, arguments will likely occur in spring of 2020, with a decision coming in June.