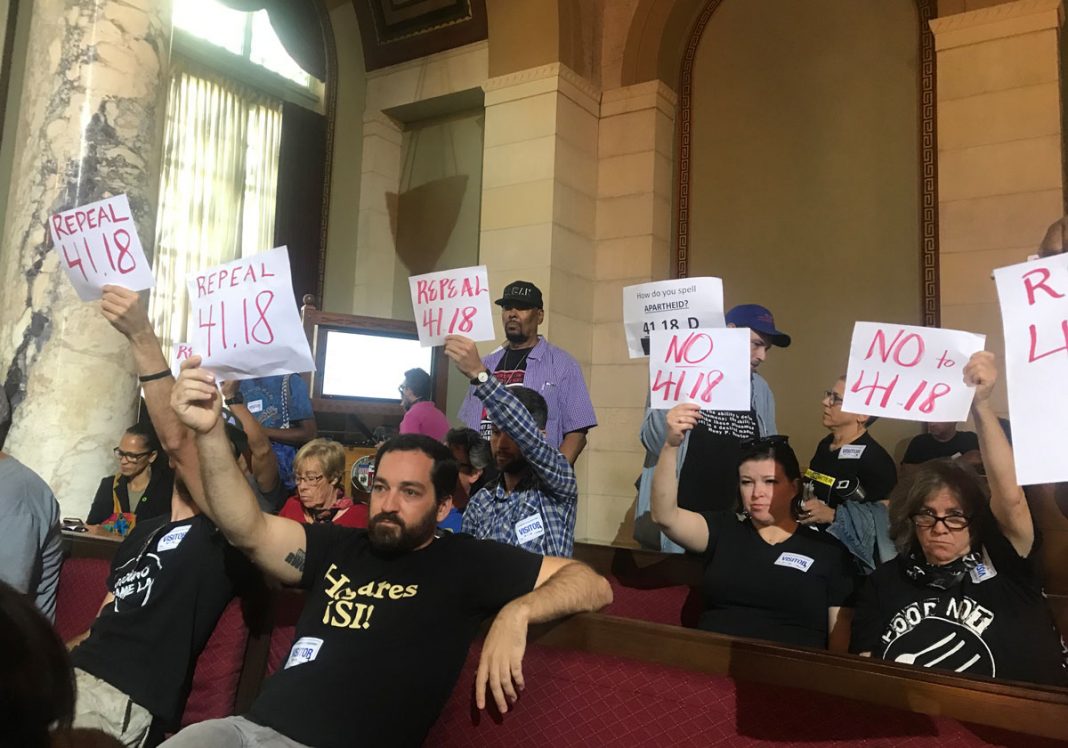 Homeless advocates broke out in chants of “Shame on you!” and “House keys not handcuffs!” at a heated City Council meeting on Tuesday morning, as councilmembers met to discuss a proposed overhaul of rules regarding sitting and sleeping on sidewalks in the city. The discussion comes about a month after the council’s Homelessness and Poverty Committee drafted a rewrite of Municipal Code 41.18(d), a 1968 law that bans individuals from sitting, lying, or sleeping on sidewalks anywhere in L.A.

The city attorney’s office has recommended that the law—which has only been enforced in limited circumstances since a legal settlement in 2006—be brought into compliance with the recent federal court ruling Martin v. Boise, which struck down a similar law in Idaho last year. While homeless advocates support the repeal of 41.18(d), they worry that a set of proposed replacement rules drafted by the committee—which would restrict people from sleeping near parks, schools, driveways, building entrances, and many other specific areas of the city—could make life even more difficult for the city’s homeless population, subjecting unhoused individuals to increased criminalization and disconnecting them from services.

“You know that making it illegal for people to sleep on the sidewalk is wrong,” said Jane Nguyen of the advocacy group Ktown for All during the public comment section of Tuesday’s meeting. “We are asking for the moral courage to do what’s right—provide housing and public health resources so that people can climb out of homelessness.”

The insistent pressure of @LACANetwork and #servicesnotsweeps is showing @MitchOFarrell they can get folks “in the horseshoe” to oppose him. When we fight, we win. pic.twitter.com/sqWfZ49q79

After public comments ceased, a flurry of chants and protests put the meeting into a temporary recess, delaying the start of the council’s official discussion. Once the crowd calmed down, Councilman Mitch O’Farrell, who heads the Homelessness and Poverty Committee, said that he is open to revisiting the proposal, but reiterated that he city needs to take into account the needs of “people that we hear from every day who are understandably upset, frustrated, and sometimes traumatized by the conditions they observe in many of our homeless encampments.”

Venice representative Mike Bonin fired back at O’Farrell, calling the proposed rules “ass backwards.” Bonin suggested that instead of focusing on telling people where they cannot sleep, the council should be discussing “faster, more urgent, and less expensive ways” to create shelter for people who need it. “We cannot legislate homelessness away,” he said. “We can house it away, we can service it away, we can prevent it away, but we cannot legislate it away.”

Several councilmembers echoed Bonin’s sentiments. Councilman Paul Koretz said the rules send “the wrong message that homeless people are always a danger.” Councilman David Ryu compared making anti-encampment laws to “planting a rose garden when your house is on fire.” And Councilman Gil Cedillo called the ordinance “right out of the Trump playbook,” presumably alluding to recent reports that the President plans to “crack down” on homelessness in California by razing encampments and relocating individuals to federal housing facilities.

Councilman Marqueece Harris-Dawson said that he found section C of the proposed ordinance, which some have compared to controversial “stand your ground” laws, “particularly alarming.” As it is currently written, the section would ban individuals in the public right-of-way from engaging in certain “aggressive behavior,” including “approaching, following closely or speaking to” a person in a way that makes them feel fearful or causes them “to take evasive action to avoid physical contact.”

“Police officers themselves misidentify threats that end up costing the lives of citizens,” said Harris-Dawson. “The idea that we would extend this to everyday people, to me, is just completely unconscionable and defies common sense.”

Councilman Bob Blumenfield defended the need for some restrictions. He said that while the proposed rules needed to be “more tailored,” he is concerned about people having “clear access” to public facilities if they are afraid of walking near encampments or see people who are “drug addled with needles in their arms.”

“We want to make sure that we are not criminalizing anyone, that we are providing services,” said Blumenfield “But we can’t ignore the community’s realities, and the need to have safe access to schools and to other critical amenities.”

O’Farrell wrapped up the tumultuous discussion by saying that he intended to revise—or completely remove—section C, and potentially other sections of the ordinance, upon its return to the Homelessness and Poverty Committee. “That is, if the council has the appetite to even deal with 41.18,” said the councilman. “That remains to be seen.”