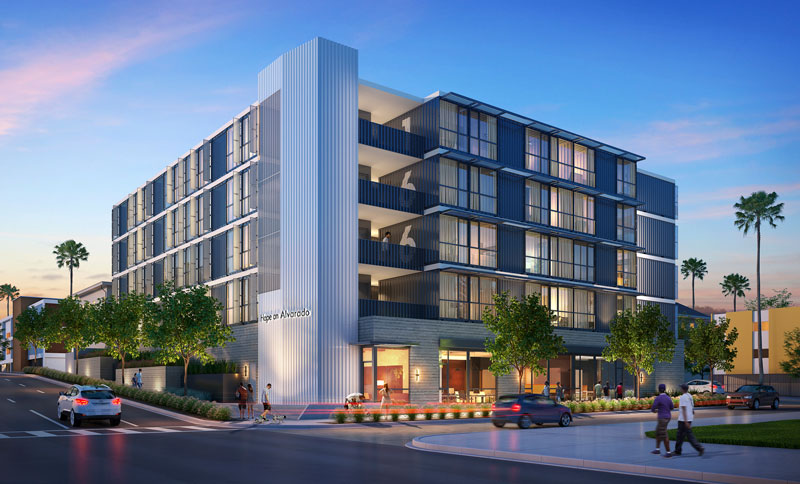 With 57,794 people and counting sleeping in the streets of Los Angeles each night, the city is looking for innovative ways to create a lot of new affordable housing, and fast.

Trailers, converted motels, and tiny backyard houses are already being touted by public officials as ways to temporarily or permanently shelter the homeless. Another solution they might consider? “Cargotecture,” or architecture built from repurposed shipping containers. Cheap, durable, and often quite charming, the corrugated steel structures have already found fans in a number of L.A. retailers and restaurateurs.

In July, local architecture firm KTGY Architecture + Planning will be the first in L.A. to transform shipping containers into homeless housing when they break ground on Westlake’s Hope on Alvarado project. Comprised of 84 units of transitional housing, the four-story complex will be centered around a central courtyard, and will include supportive services and bike parking for each tenant. But how do you make a cargo container habitable for humans?

According to Keith Labus, the project’s head architect, it’s a bit of an undertaking. “The standard shipping container is just a steel metal box with a plywood floor,” he says. “They have to be cleaned up. Paint and chemicals and things preserve the container as it shifts back and forth overseas.”

After that, there’s the multi-step process of converting the box into a real living space, with windows, insulation, drywall, flooring, and plumbing.

While planning Hope on Alvarado, Labus and his team realized this would be too time consuming, and figured out a shortcut. “We’re working with manufacturers and converting the containers into residential units right in the middle of the manufacturing process,” says Labus. “It’s more efficient and it can be done much faster, so we can deliver more units quicker.”

Once they’re completed, the 400- to 480-square-foot units—which are pre-approved as zoning compliant at the state level—will be carted to the site and stacked like Lego bricks atop the traditionally constructed ground floor of the building.

According to the project’s website, the total construction process will only take about six months. As money starts flowing into homeless housing from $1.2 billion city bond measure HHH, and council members work to approve 222 units in each city district by July 2020, don’t be surprised if you see a few more of these quick-to-build corrugated constructions cropping up the coming months—Labus says KTGY is already working on plans for three similar complexes around the city.

RELATED: Measure HHH Is the Most Important Thing You Can Vote on Today