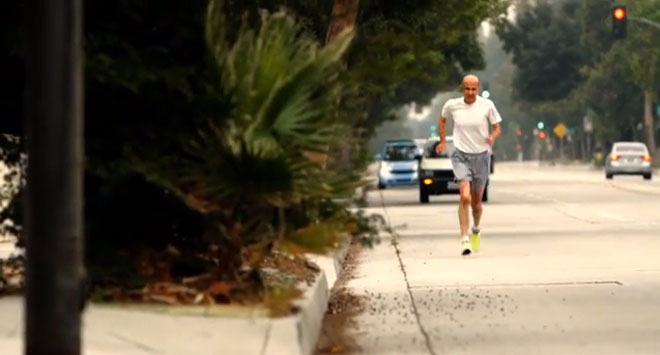 Sheriff Lee Baca on a run

L.A. County Sheriff Lee Baca will trade his department-issued boots for running shoes when he joins the thousands of athletes participating in this year’s Nautica Malibu Triathlon on Sunday. Baca, who has participated in the event “probably since it began” and will be competing on a relay team with swimmer Heidi Nelson and cyclist Gary Hanson this year, tells us how he’s been training, why he’s a competitor at 71 years old, and why that other race he’s running—the one to be sheriff for another term—is like “facing a mountain with a shovel.”

You’ve been participating in the triathlon for a long time. After all these years, what does this event mean to you?
It’s an annual tradition. It allows me to feel that I have the strength to overcome any challenge, and it is a challenge to participate in a triathlon, even if you’re just the runner. Everyone depends on you. I usually get a good lead going because of my biker and swimmer, but I gotta hold the lead! I can’t give it up to somebody else coming behind me. I have a lot of desire for the whole team to win. And then of course the donation to Children’s Hospital is a noble cause. It’s an unselfish race because everyone benefits no matter what position they come in at.

Are you competitive about your racing time?
Oh yes! I’ve run that four miles in a time as low as about 25, 26 minutes and as high as 30 minutes, depending on what kind of condition I’m in.

What is it about running that you enjoy so much?
Everything about it. First of all, you’re outdoors for the most part. I run between five and five-thirty in the morning, and I go for at least an hour. Then I do track work with intervals and hill repeats, as well. There are three aspects of running you have to do: distance, hills, and speed. And each has its own experience and it’s really about learning how to use your brain and your body.

That’s a lot of work! And you’re a septuagenarian now.
The kind of running I do is always going to be hard, meaning [I] put myself at the edge because that is what certain parts of the training requires, but no doubt you slow down. In my early 60s I could run a 5:20 mile straight out, which is a very good time. I’ve always come in the top three as long I’ve been doing this, from my mid 30s up to the present time, and I’ve entered hundreds and hundreds of races. I’ve always walked away with a medal, if not first then second, and if not second then third. That still happens, even if you slow down, because there’s not too many people my age that can do what I do.  It takes years and years of proper training and proper shoes, and I take the nutritional products you should take [to care for] cartilage, particularly in your knees. Glucosamine is a repairer of cartilage, so it keeps you healthy. I don’t have knee problems or back problems, anything that would debilitate a runner. I do the proper warm ups and then I get a two-hour acupressure massage once a week. You’ve got to have flexible tendons and flexible muscles.

Do you have a pre-race ritual?
Yes I do. I run out a mile on the course and back before the bikes are in just to get the muscles prepared, then I do an intensive amount of stretching for about 15 minutes. Then I’m ready to go.

Is there a burger, or some other post-race treat, waiting for you at the finish line? Or will you go straight into uniform and back to work?
I do have to get back—not in uniform but in a suit—to go to a public affair. I think I have a parade I need to be in.

What about completing a triathlon or running for another term?
I think that running for another term is tougher, because there are so many pieces to that journey, and it’s a journey that’s going to occur over an 18-month period of time. It’s like facing a mountain with a shovel; you shovel one scoop of dirt at a time to reduce the mountain down in size so that you can conquer it. It involves everything you have—your history, your hope for the people to be as safe as possible. You want to be creative and grow with success. Public safety is such an enormous responsibility that you want [to do] everything you can to build the public’s trust and serve their interest and take the criticism along with the praise and just be a good public servant. You have to make sure that [people] are being served the right way. It’s very complicated, but it’s not difficult if your heart is in the right place and you care for them above all.