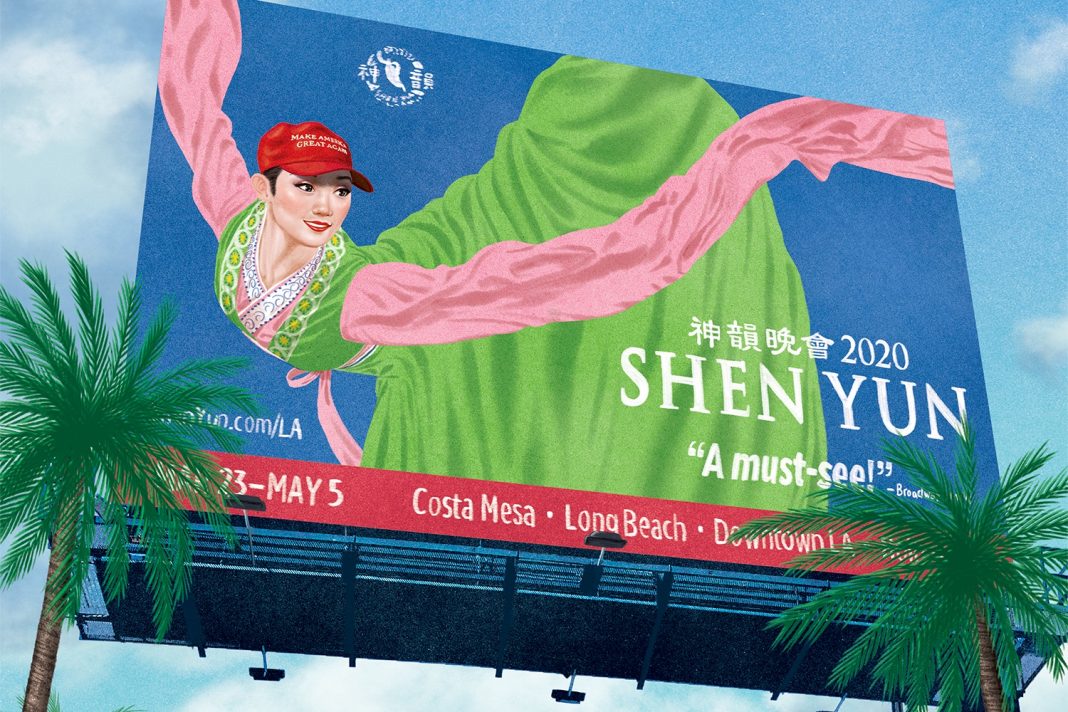 Each spring the city is flooded by a deluge of advertising—from bright, colorful billboards to glossy mailers to round-the-clock TV commercials—heralding the imminent arrival of a quirky Chinese dance troupe named Shen Yun. Since the group first appeared in L.A. a decade ago, its exotic mix of traditional Chinese dance, Cirque du Soleil-like acrobatics, and anticommunist messaging has won a devoted audience. Critics may scoff at its outre theatrics, and the Chinese government has dismissed it as an “anti-society cult” with “tacky taste and low artistic standards,” but the show regularly sells out across the country. This year, as Shen Yun prepares for a six-week run in Southern California in May, it is coming under scrutiny for its close association with the Epoch Times, a fiercely pro-Trump conspiracy website recently mired in scandal for its ties to a massive network of fraudulent Facebook accounts.

Both Shen Yun and Epoch Times are funded and operated by members of Falun Gong, a controversial spiritual group that was banned by China’s government in 1999. Less a religion than a spiritual doctrine, Falun Gong melds traditional Taoist principles with occasionally bizarre pronouncements from its Chinese-born founder and leader, Li Hongzhi. Among other pronouncements, Li has claimed that aliens started invading human minds in the beginning of the 20th century, leading to mass corruption and the invention of computers. He has also denounced feminism and homosexuality and claimed he can walk through walls and levitate. But the central tenet of the group’s wide-ranging belief system is its fierce opposition to communism.

In 2000, Li founded Epoch Times to disseminate Falun Gong talking points to American readers. Six years later he launched Shen Yun as another vehicle to promote his teachings to mainstream Western audiences. Over the years Shen Yun and Epoch Times, while nominally separate organizations, have operated in tandem in Falun Gong’s ongoing PR campaign against the Chinese government, taking directions from Li.

Despite its conservative agenda, Epoch Times took pains until recently to avoid wading into partisan U.S. politics. That all changed in June 2015 after Donald Trump descended on a golden escalator to announce his presidential candidacy, proclaiming that he “beat China all the time.” In Trump, Falun Gong saw more than just an ally—it saw a savior. As a former Epoch Times editor told NBC News, the group’s leaders “believe that Trump was sent by heaven to destroy the communist party.”

Relatively unknown before 2016, Epoch Times enjoyed a surge in traffic after the presidential election thanks to stridently pro-Trump content. NBC News reported in 2017 that the site was drawing millions of visitors a year, more than The New York Times and CNN combined. But Falun Gong didn’t restrict its pro-Trump stance to the paper.
Facebook revealed in December that Epoch Media Group, which publishes Epoch Times, had furtively pumped nearly $10 million in ads through a hidden network of fake accounts and pages. In the past few years it has produced more pro-Trump advertising than any other group, including the Trump campaign. The ads have promoted anti-impeachment sentiment, anticommunist propaganda, and conspiracy theories about Joe Biden and other opponents of the president.

Though Shen Yun and Epoch Times both fall under Falun Gong’s umbrella, the parent organization’s politics haven’t seemed to have impacted the dance troupe’s bottom line. According to public filings, Shen Yun generated nearly $30 million in revenue in 2017, the most recent year for which records are available—a $7 million increase from the year before. But Shen Yun spends none of its own money on marketing. Instead it relies on a vast army of devout volunteers and donors who produce ads, buy billboards, and send out millions of mailers promoting the show.

Among Falun Gong members there is an “expectation that all practitioners … basically put their lives on hold for the weeks or even months leading up to [Shen Yun’s shows],” a former member wrote in Medium. A San Francisco Chronicle story reported that from 2015 to 2017 Shen Yun-linked groups spent at least $39.3 million on advertising—a staggering amount for a nonprofit of its size. (For comparison, fashion house Guess spent $37.1 million worldwide in 2017.) While employing such massive resources to benefit a cultural exposition seems harmless, using the same apparatus to influence a presidential election is more problematic. Facebook removed over 600 accounts tied to Epoch Times, but by that point, the group’s 55 million Facebook followers had already been exposed to a flurry of misleading ads, antivaxxer talking points, and QAnon conspiracies.

Now if only Facebook could do something about the billboards.