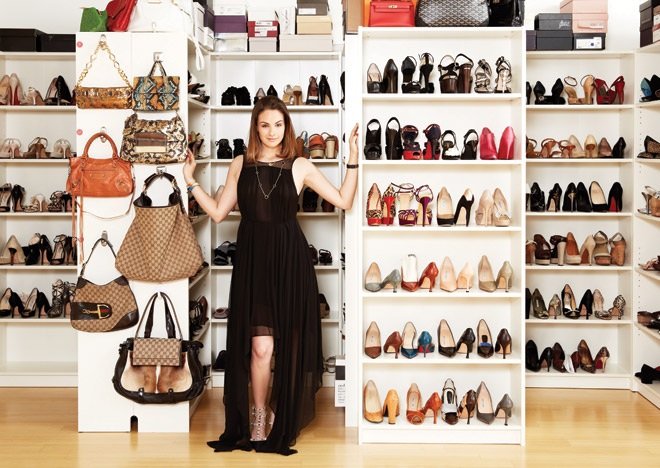 Jaclyn Shanfeld has been surrounded by show business since she was a kid. Her grandfather, Phil Silvers, starred in the 1950s TV classic Sgt. Bilko; her mother, Nancey Silvers, writes made-for-television movies; and there are bunches of aunts and uncles in the industry, too. Given Shanfeld’s pedigree, as well as her camera-ready looks, the meeting last year at United Talent Agency seemed predictable enough. Except that she wasn’t seeking Hollywood representation. What she needed from the industry power broker was several hundred thousand dollars in seed money for an online start-up to buy and sell used designer clothes. “I was just the girl with a concept,” says Shanfeld, whose friend at UTA told her boss that he had to meet this woman. Immediately. After hearing Shanfeld’s spiel, Brent Weinstein, who is in charge of digital media at the agency, was on the phone in search of investors.

ShoeDazzle, Beachmint, the Daily Look, ThreadSense—L.A. has become a hotbed for online entrepreneurs, many of them in the fashion business. Some have received millions of dollars in venture financing; others are struggling to get beyond early-stage funding. Nearly all are still grappling with how to attract and hold onto a fickle customer who is not entirely sold on Internet shopping. “You want to make sure people like the stuff you’re selling, and you want to make sure people know about it,” says Jeremy Liew, a partner at Silicon Valley’s Lightspeed Venture Partners, which has invested in numerous online sites, including LivingSocial and Flixster. Weinstein didn’t have much experience in fashion retailing, but he had a good feeling about Shanfeld and her Santa Monica company, Shop Hers. And he certainly knew deal making. “We’re all about building brands, and that brand can be an actor, a television show, a line of consumer products, or a company,” he tells me.

Weinstein started on a Monday, connecting Shanfeld to Ryan Steelberg, an Orange County-based investor of Internet marketing ventures, who quickly committed funding. On Tuesday it was Paige Craig, another local investor. On Thursday it was Brian Lee, who cofounded LegalZoom, the online legal document company, and later started Santa Monica-based ShoeDazzle, the e-commerce site fronted by Kim Kardashian. “By Saturday,” Shanfeld says, “Jeremy Zimmer, who is the head of UTA, got wind of what had been happening in his digital media department and decided he wanted in, too. I think they all saw that there would be something exciting there for their wives and daughters. It was one of the first comments from them—they would say, ‘Oh, my God, you have no idea how much my wife has in her closet.’ ”

That’s hardly qualitative research, which is one reason industry traditionalists wonder whether the millions of investment dollars going into online shopping sites is mostly a vanity play. “Investors are not asking people who have an overview in retail,” says Ilse Metchek, the longtime president of the California Fashion Association. “Their wives want them to buy into these businesses.” Indeed, Lee’s wife, Mira, says she’s on Shop Hers several times a week, both buying and selling. “Brian says that I can shop all I want,” she tells me. “He says there’s no need to go to Barneys and other places and spend thousands of dollars on clothes.”

Online fashion has become congested and intensely competitive (one young entrepreneur I spoke to says she counted roughly 700 fashion sites that have received funding). It’s easy to get in the game—all you need is an idea, a Web site, off-the-shelf software to keep track of the money and merchandise, and a plan to generate traffic. Entering the space, however, is not the same as prospering in it. Early gimmicks have fallen out of favor, such as member subscriptions, a riff on the old Book-of-the-Month Club where shoppers are expected to make monthly or quarterly purchases. ShoeDazzle abandoned that model when revenues began falling (not many customers were willing to buy a pair of shoes each month), though Lee says that a course correction last year is working well.

While just 1 or 2 percent of the fashion market is made up of e-commerce-only sites, sales topped $1 billion in the 12-month period that ended in March, according to the research firm NPD Group—a 31 percent jump from the 12 months before. “You’re seeing a lot of capital chasing the business,” says Brien Rowe, managing director of the L.A. investment firm Intrepid. “It’s the online retailer that provides more than the shopping experience. It’s editorial, it’s advice, it’s community—it’s an experience that drives the customer to come back repeatedly.”

One site that’s managed to bypass most of the pitfalls is Nasty Gal. The business, based downtown, was started seven years ago by Sophia Amoruso, at the time a 22-year-old community college dropout who began with an eBay page to sell items she had found by rummaging through secondhand outlets. With the help of social media, as well as an edgy, often suggestive fashion sense, Amoruso at first concentrated on selling vintage clothes (merchandise more than ten years old) and then expanded to a full array of clothing and accessories geared to teens and twentysomethings. Venture capital quickly moved in. Nasty Gal has been helped by a strong senior staff—Amoruso hired former ShoeDazzle executive Deborah Benton last year as chief operating officer—along with a focus on low-priced teen clothing that seldom gets returned. While skeptics still wonder about the company’s staying power in light of the unpredictable teen market, Nasty Gal revenues reached nearly $100 million in 2012, an astounding increase from $28 million a year earlier. Even more astounding: Roughly a quarter of Nasty Gal shoppers visit the site daily for at least six minutes.

Shanfeld, who is 29, is another businesswoman with an unorthodox background. A former talent scout for the Ford and Vision modeling agencies, she’s a longtime fashion junkie who has often lacked the budget to feed her habit—which became a problem several years ago when she had to wear the same things at weddings again and again. Selling those old ensembles to collect cash for new purchases was pointless. “I went to the local consignment stores, and I found that I was getting ripped off right and left,” she says. “I would get $15 for items that could be five or six hundred dollars retail. I felt completely taken advantage of. ” Figuring that other women felt the same way, she came up with an idea: Why not start a site that’s devoted to previously worn high-end fashion? For sellers it would be a chance to clear out their closets and make more money than they would at consignment stores. For buyers it would be a chance to wear designer outfits at a fraction of their original cost. Shop Hers would serve as the middleman.

Helped by Weinstein’s orchestration, the company was started with $650,000 in seed money. Shanfeld also brought on two key managers to run the place—one from Nordstrom, another from ShoeDazzle. Sellers can do their deals two ways: Either have Shop Hers prepare items to be resold for a 35 percent transaction fee—that includes photographing and describing the items—or they can work directly with potential buyers, with the company pocketing an 18 percent fee. In both cases the merchandise is shipped to Shop Hers, where it’s examined for authenticity and imperfections (pieces are taken to Beverly Hills boutiques for second opinions). Buyers select from hundreds of clothes and accessories, with each item listing size, condition, material, designer, price when first purchased, and resale price—pretty much how customers do it on the RealReal, Walk in My Closet, and other resale sites that Shop Hers is trying to catch up to.

At first Shanfeld sought out customers by knocking on the doors of people she knew, offering cupcakes and wine if they used the site. As of May, she says, the operation had 28,000 users and an impressive average sale price of $350 per item. “It’s really good fun because I don’t want something that everyone else has,” says Claire Hester Tunkl, a regular Shop Hers customer who buys and sells. “How many times am I going to wear the same Armani gown?” Among the many deals I spotted was a Derek Lam blouse that originally sold for $623 and was going for $75, and a $2,400 Alexander McQueen dress for $200. “The biggest surprise is that we’ve been inundated with merchandise,” says Shanfeld, who during our interview is wearing a beige Chloé dress, Valentino ankle-wrap heels, and an Acne motorcycle jacket—all secondhand merchandise. “There’s a story behind every piece we sell,” she says. “It’s something that, for whatever reason, doesn’t fit or they can’t afford to keep or they’ve moved on to another style. But everything was once loved.”

Shanfeld knows enough not to get ahead of herself, understanding she’ll need to make adjustments to the original business model. She faces the same challenges as other e-commerce companies, starting with too many competitors jockeying for a share of the space. There’s also the hurdle of persuading customers to buy something without first trying it on. Shop Hers is among the sites that use height, waist, and inseam specs to supplement a single size number, but measurements can never replace seeing it in person. “It’s a sensory process, it’s about touch and feel, which is why traditional retailers have held on for so long,” says Marshal Cohen, NPD Group’s chief industry analyst. One idea gaining interest is having brick-and-mortar stores carry only limited stock, allowing customers to try on display items and then purchase what they want, preferably for next-day delivery. Several chains have been integrating other services so that, for example, online orders can be returned to the store. “We’re moving to a place where we’re going to see singular commerce where there’s no real difference,” says Lee.

For now the plan at Shop Hers is to stay lean, holding off on apps and other features until the main business gets established. Which is really the purpose of any early-stage company: to show that the concept can work. The tricky part is that traffic needs to grow fast enough for venture capital firms to become interested. That’s where the big money lies, which would mean more capital for expansion. Way down the line could be a public offering or ownership by a private equity firm, breakthroughs that await most of these businesses. “There are two ways to get where you want to be,” Shanfeld says. “One is timing. Two is to have a great concept that’s not only a fad or a utility, but something that’s got legs. We happen to think we have a really good chance.”