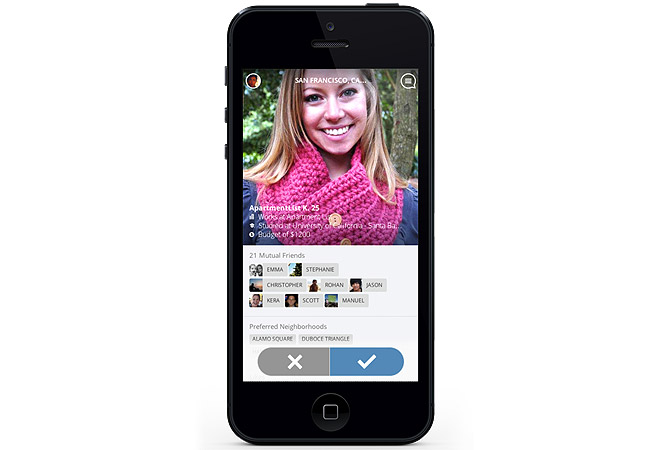 You’ve just moved to Los Angeles and are in dire need of a roommate. But where to begin your search…Eureka! How about Craigslist! You’ve heard friends’ horror stories of Craigslist roommates, but how bad can the process possibly be? Living with a random person might be an adventure—in fact, you’re sensing a new bestie alert.

You fire up the computer and begin your search, only to find the pickings are slim: here’s an ad soliticing a live-in girlfriend. Then there’s the pseudo-nudist in Topanga looking for a counterpart. You’ve suddenly become skeptical of this whole Craigslist thing. Why hasn’t someone invented an app to help people sort through potential roommate candidates, you wonder.

Kobs and Herndon are looking to revolutionize the rental world as co-founders of Apartment List (the nation’s fastest growing rental site) and their new app Roommates. Like Tinder, which makes the world of online dating slightly less horrifying by signing users up through Facebook, Roommates employs the same philosophy in an effort to make the roommate search simpler and safer.

“We want users to connect with Facebook because it provides a bunch of interesting data: where you work, where you went to college, your profile pictures,” Roommates CEO Kobs says. “The most interesting thing about connecting with Facebook, though, is [being able to see that] in your circle of friends and my circle of friends, we might have overlap. We tell you who those friends are, and that level of transparency is absolutely critical for us.”

Roommates users are able to flit through the profiles of other clients, which feature a photo, their monthly budget, and neighborhood preferences. If you think someone might be a good match, the app lets you indicate that you’d like to talk with them more. If they do the same for you, Roommates informs both parties of the match, at which point users are able to text through the app. From there on, the process is in users’ hands, though Kobs still likes to facilitate meetings between potential co-habitors. “We want to take the online experience offline as well,” he says. “In San Francisco we have roommate mixers where 60 or 70 people show up, all looking for someone to live with. By the end of the year, we’ll have those mixers in other cities, too.”

The app, which is both iOS and Android compatible, has been available in San Francisco since July and will be launching in Los Angeles, Chicago, Boston, and New York today, to Kobs’ delight. “Our team of 40 is laser-focused on accomplishing something great,” he says. “We eat, sleep, and breathe solving the rental problem.” Here’s hoping the app can help kick creepy Craigslist roomies to the curb.