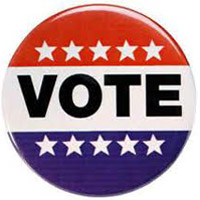 We may cast our ballots alone, but the Presidential poll returns will affect us all, so it makes sense to spend election night being social. Celebrate or find consolation at one of these events

Park Your Politics
WHEN: From 5 – 10 p.m.
WHERE: Grand Park‘s Olive Court
WHAT: A DJ and foodtrucks will give this outdoor screening a community feel.

Politics and the Power of Music and Film
WHEN: At 7:30 p.m.
WHERE: AFI Fest Screnning Room at the Egyptian Theater, 6712 Hollywood Blvd., Hollywood
WHAT: AFI Fest screens Ariana Delawari’s war documentary We Came Home before projecting live election coverage and hosting a panel discussion with the director and David Lynch.

Drinking Liberally Los Angeles Election Night Party
WHEN: From 4 p.m. – late
WHERE: Trip, 2101 Lincoln Blvd., Santa Monica
WHAT: When the polls start closing on the East Coast, the beer (and other libations) will start flowing at this returns-watch party organized by President Obama supporters.

Trevor and Josh Present Election NIght Disaster Party/Show
WHEN: At 8 p.m.
WHERE: Trepany House at the Steve Allen Theater, 4773 Hollywood Blvd., Los Angeles
WHAT: Comedians Josh Fadem and Trevor Moore kick off a four-month residency with a special political show, improvised on the spot in response to election results.

Los Angeles Election Watch Party
WHEN: At 6 p.m.
WHERE: The Abbey, 692 North Robertson Blvd., West Hollywood
WHAT: The Human Rights Campaign Los Angeles will be welcoming guests—and accepting donations—at one of the most popular, and certainly the most politically active, gay bars in West Hollywood.

Election Night at the Hammer
WHEN: November 6, 6 p.m.
WHERE: The Hammer Museum, 10899 Wilshire Blvd., Los Angeles
WHAT: Politics meet art at this museum event. Your Land / My Land: Election ’12, an exhibition by Jonathan Horowitz, will be open, and a cash bar will be set up for anyone who gets antsy while watching the live coverage of the election in the Billy Wilder Theater.

SMYR!! Election Night Party!
WHEN: At 6 p.m.
WHERE: Location is available to SMYR!! members only. To become a member, visit this group page.
WHAT: This group of young republicans welcomes those who “love Romney and hate Obama, or settled for Romney instead of Obama” to a member meet-up that’s BYOS (bring your own snack).