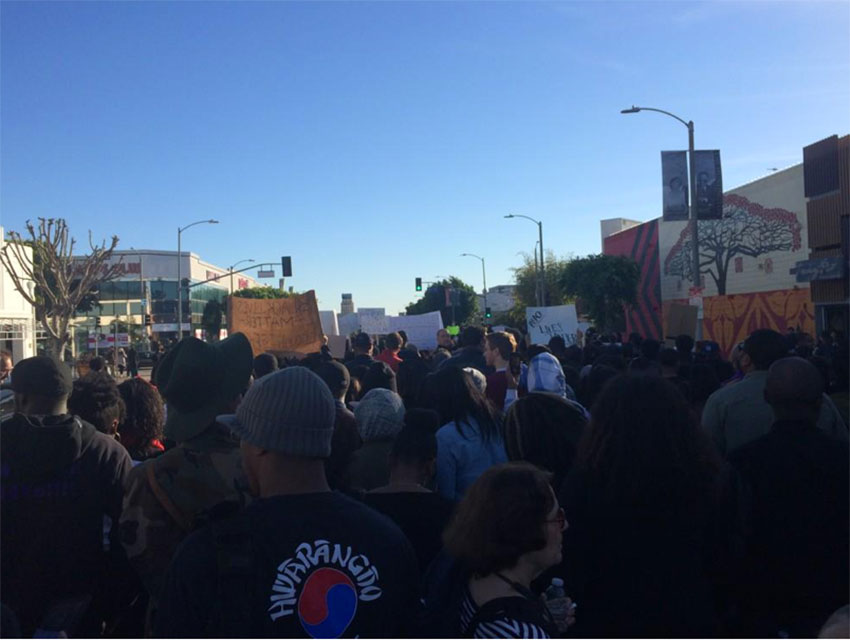 Four-and-a-half months after 25-year-old Ezell Ford was shot to death during an altercation with police in South Los Angeles—and on the same day one of two slain NYPD police officers were laid to rest clear across the country—a group that describes itself on social media as a coalition of community leaders organized a demonstration through Beverly Grove to demand “justice for [Ford] and the countless others who have been affected by police violence” and to “unite and empower the people of Los Angeles.”

NBCLA reports several thousand protesters turned out for the “Millions March” Los Angeles protest, which began at Pan Pacific Park on Beverly Boulevard and wrapped around the neighborhood of Beverly Grove, remaining peaceful throughout. Thoughts and images posted to Twitter with the hashtags #millionsmarchla and #millionmarchla depict a crowded, passion-fueled event, one that added local voices to what’s become a national discussion about justice, racism, and public safety. Take a look:

Taking my #WhitePrivilege seriously means if my black brothers & sisters have to be there, so do I #millionmarchla pic.twitter.com/14AwxCHEyU”

LAPD Officers Are About to Get a Raise—but How Much Do They Make to Begin With?