Home Politics Can Google Save the LAUSD? 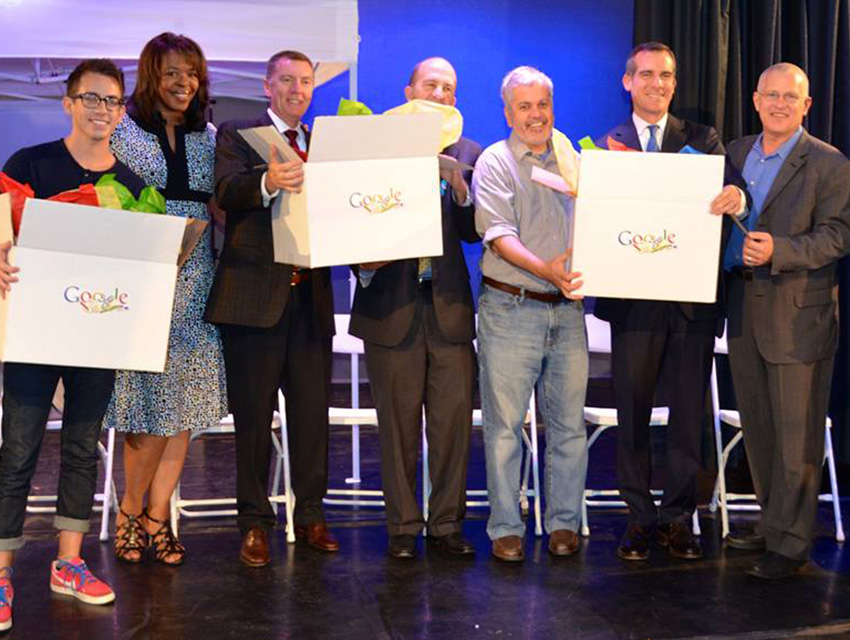 Mayor Garcetti and city councilmember Mike Bonin (11th district) joined Google this morning at Marina Middle School to announce the tech behemoth’s donation of almost a $1 million to the LAUSD. The generous contribution came via DonorsChoose.org, a Kickstarter-esque crowdsourcing site that helps schools in need of supplies find donors nationwide.

A formal presentation of gifts was held at the middle school, during which Google brought out boxes that were giftwrapped and labeled with teachers’ names. “It felt like it was Christmas morning,” Bonin told us, “like Santa had just left presents for all the schools.”

The LAUSD shared approximately 1,000 needs on DonorsChoose.org, all of which have now been met courtesy of Google’s donation. Some of the requests included “super Kindles to super first graders,” a 3-D printer for YouthBuild Charter school in South L.A. , and an amphitheater for Shakespeare performances at Marina del Rey Middle School.

This is not the first time Google has donated a surplus of provisions to educational institutions. Just last week, schools in the Austin and Washington, D.C. areas received things like comic books, hands-on science activities, and alphabet dough cards.

Google’s Los Angeles headquarters is located in Venice Beach, which is in Bonin’s district. The councilmember says they have been a good neighbor and a great corporate citizen. Thanks to their benefaction, local children will be able to “go on field trips to the LA River and have more interactive marine biology lessons,” Bonin says. “Google’s gift will bring life to a lot of our classes. This gives our kids a chance to learn more than just with the public resources.”

A big company with an even bigger heart? We think that deserves a GoogleA+.