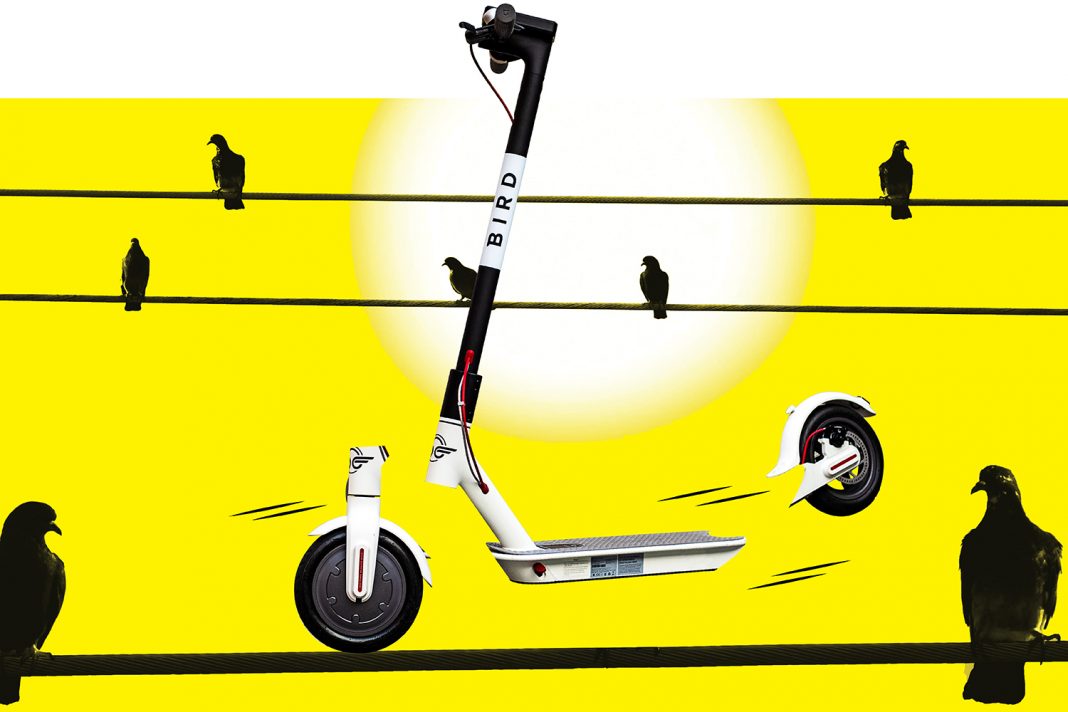 A year ago Los Angeles embarked upon the nation’s largest experiment in micromobility. Hoping to ease traffic and reduce emissions, the city’s Department of Transportation granted permits to Bird, Lime, Spin, and five other companies to operate 37,000 scooters on L.A.’s streets. Until early March, the program seemed to be working and was on track to log 10 million rides in the project’s first year.

Then came COVID-19, stay-at-home orders, and Angelenos’ reluctance to touch anything anyone else had touched. As of mid-April just 700 scooters were operating within city limits, with rides hovering around 1,000 or fewer trips a day, according to LADOT. Lime and Wheels temporarily suspended operations, and Bird recently laid off 30 percent of its staff.

Santa Monica, home to Bird’s headquarters, and the city that started the scooter craze in September 2017, has seen a 90 percent decline in ridership and an 84 percent drop in deployed scooters, from 2,500 to 400, since the stay-at-home order went into effect in March. The fleet reduction is mostly a strategic response to reduced demand, but the move was also made “to help discourage non-critical mobility and to help flatten the curve,” Bird said in a statement to Los Angeles, adding that it intends to “offer our full fleet as soon as possible.

The scooter companies that remain in operation have stepped up their sanitization procedures and are offering free rides to frontline workers. The looming question is whether the industry will be able to return to its go-go days once the pandemic is under control. The health crisis “has exposed the business model,” says Juan Matute, deputy director of UCLA’s Institute for Transportation Studies.

Bird has seen a 90 percent decline in ridership since March.

Starting in early 2018 companies from Bird to Bolt drew investment with unit-economics-based plans to place scooters in areas where they would be used frequently enough to cover costs and turn a profit. For the math to work, Matute says, a scooter needs to be ridden at least three times a day for an average trip of 12 minutes. “The challenge, and why they haven’t been making money,” Matute says, “is that companies have invested extraordinary amounts expanding into areas where there’s not going to be as much demand.” In other words, cities out side of balmy Southern California. Lime pulled out of all 100 markets in which it had been operating, except for two cities in South Korea, after the World Health Organization declared the coronavirus a global emergency. Now the company is looking to that country for clues about what the business might look like in a post-quarantine world. “We continue to explore options as the new normal evolves,” says Katie Stevens, head of global policy for San

Francisco-based Lime.  Stevens says ridership dropped in South Korea when confirmed cases were at their height, but the company is now seeing even higher usage as people look for transportation that allows for social distancing. Reports out of China indicate a similar trend of increased demand for micromobility as fewer people risk mass transit.

With the pandemic still active in L.A., it’s too early to tell how a scooter recovery could play out here. But with so many companies offering the same service, “the likelihood is that a number of companies will go under,” says Aaron Michel, a partner at the investment firm 1984 Ventures. “The ones with deep pockets will hibernate. And the companies that own them—the Fords, the Ubers, the Lyfts—will have to take a hard look at whether unit economics justify these businesses after this is all over.” The companies that do survive will have to evolve. “The whole industry is undergoing a giant evolution,” says Kyle Kozar, a senior transportation planner for Santa Monica. What started as publicly funded and operated bike-share services turned into privately operated, venture-capital-funded scooters that companies like Bird dumped onto public streets by the thousands without consulting municipal governments. “Now I think it’s going to be pivoting back more toward [a] relationship with cities,” Kozar says, with scooters working more like a bike-share program administered through a public transit agency.  “This crisis has demonstrated that transportation is the connective tissue required to keep essential services running,” says LADOT spokesman Colin Sweeney.

We’re about to see exactly what that will look like.