Home Film Scene It Before: Toretto’s Market & Café from The Fast and the... 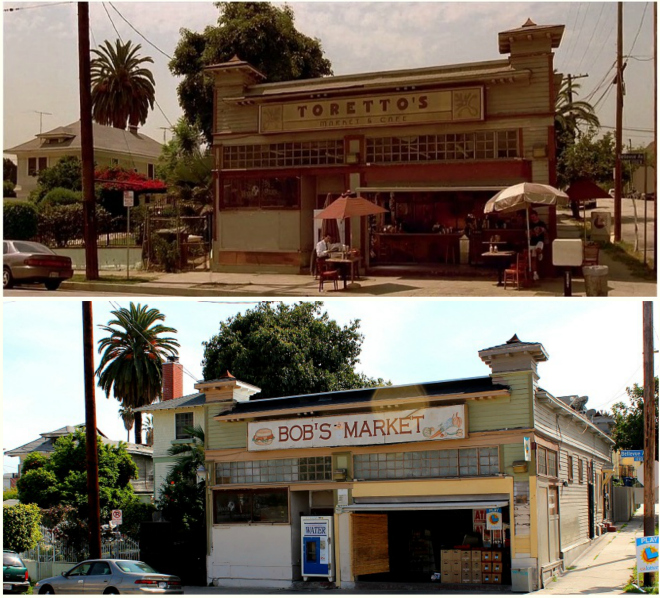 I was devastated to learn of Paul Walker’s death two weeks ago. I had met the actor almost a year to the day before his passing and found him to be one of the kindest celebrities I have ever encountered (and I’ve met a good number of them). The more I learn about Walker and his many charitable deeds, the more tragic his death becomes. As his Hours costar Judd Lormand recently stated, “The world needs more Paul Walkers.”

Incredibly (and despite the constant urgings of one of my best friends, Mike), I had yet to see The Fast and the Furious—or any of its sequels, for that matter—before Walker died. I sat down to do so last week, and though it’s certainly a guy’s flick, I thoroughly enjoyed the film.

That’s not to say I wasn’t familiar with where The Fast and the Furious was shot around L.A. More than a few times over the years, Mike had driven me by Bob’s Market at 1230 Bellevue Avenue in Echo Park, the historic clapboard bodega that is immortalized on screen as Toretto’s Market & Café, where Walker’s Brian O’Conner infiltrates a gang of illegal street racers in the movie.

The structure, which was designed by architect George F. Colterison in 1913, has housed a market since its inception and is Los Angeles Historic-Cultural Monument #215.  Besides The Fast and the Furious, the tiny storefront has been featured in a Season 4 episode of The Mentalist and in the background of L.A. Confidential, and it served as the inspiration for B.J.’s Market in the video game Grand Theft Auto V.  Sadly, the place does not offer counter seating or tuna sandwiches on white bread in real life. Then again, “no one likes the tuna” there, anyway.

Photographs: Top: a screen capture from The Fast and the Furious. Bottom: Bob’s Market in summer 2012, by Mike Flores.