Home Film Scene It Before: Toretto’s House from Furious 7 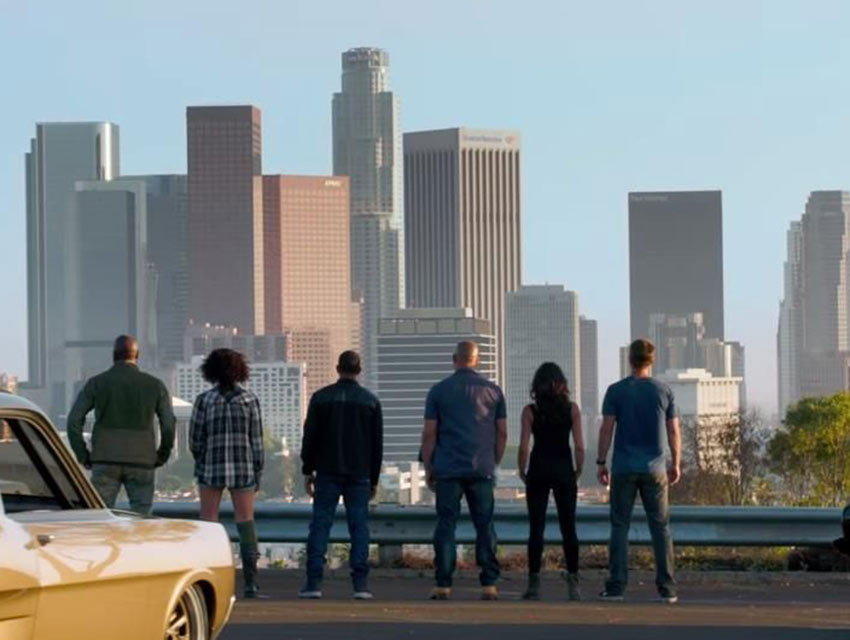 Furious 7 enjoyed an explosive opening weekend, bringing in $143.6 million and becoming the highest-grossing movie with an April premiere in the history of filmdom. And rightfully so; the flick is the franchise’s best. The final send-off to star Paul Walker, who played Brian O’Conner in six of the F&F installments, was poignant and beautiful. (Some advice: bring Kleenex.) The action and stunt sequences are so gripping they are almost nausea-inducing. When the movie was over I felt like I needed a valium and a stiff drink! One sequence involving a plane is particularly dizzying, but I don’t want to get into too many spoilers here.

Even more mind-blowing than the riveting action scenes: the sequences involving Walker. Many of his scenes were completed after his death using CGI and his two brothers as stand-ins. While watching, I found myself scrutinizing Paul’s face onscreen trying to discern which sequences were real and which had been altered. I wasn’t able to come to a determination—not once.

I also found myself scrutinizing the movie’s locations. Furious 7 was shot in various far-flung locales, including Abu Dhabi (Emirates Palace hotel and the famous Etihad Towers make appearances), Georgia (the gang proclaims “no more funerals” in Atlanta’s Oakland Cemetery and the Vulcan Materials Company quarry in Stockbridge provides a dramatic backdrop for one of the movie’s more sensational stunts involving Brian, a cliff, and a large bus) and Colorado (that’s where the group races around the winding Highway 50, near Pikes Peak).

A few scenes, however, were lensed on the streets of Los Angeles where the franchise began. The hospital where Hobbs (Dwayne Johnson) recovers from his confrontation with Deckard Shaw (Jason Statham) is a digitally-altered St. Vincent Medical Center, located at 2300 W. 3rd Street in Westlake. Letty (Michelle Rodriguez) goes head to head with a drone in the 2nd Street Tunnel in downtown L.A. The gang gathers after a tumultuous trip to Abu Dhabi in the parking lot of Dodger Stadium (which is also where Brian tests out his racing skills in the first installment). The microwave tower of the AT&T Madison Complex Tandem Office located at 420 S. Grand Street in downtown L.A. is destroyed during the movie’s climax. And Leo Carrillo State Beach in Malibu provides the picturesque scenery for Furious 7’s sentimental good-bye to Walker. The movie’s most memorable location has to be the house belonging to Dominic Toretto (Vin Diesel), which makes appearances in several of the F&F flicks. In real life, the structure is a multi-family dwelling with four units in Echo Park. It is just up the street from the bodega that plays Toretto’s Market & Café in the first flick, which can be found at 1230 Bellevue Avenue.   According to a Yahoo! Movies article, The Fast and the Furious director Rob Cohen had the property’s owner paint the exterior of the structure white for the filming of the franchise’s first installment so that the gang’s brightly-colored cars would stand out when parked next to it. The real life interior of the residence was also used in the original movie.

Dominic’s pad is destroyed in a (CGI-created) massive bombing at the beginning of Furious 7. In reality, the home still stands in much the same state that it first appeared onscreen in The Fast and the Furious 14 years ago. Rumor has is that an 8th installment is currently in the works, but I’m hoping it does not come to fruition. Furious 7 seems like the perfect way to end the franchise to me. It’s one last, bittersweet ride.