Home Film Scene It Before: The Walley World Entrance From “National Lampoon’s Vacation” 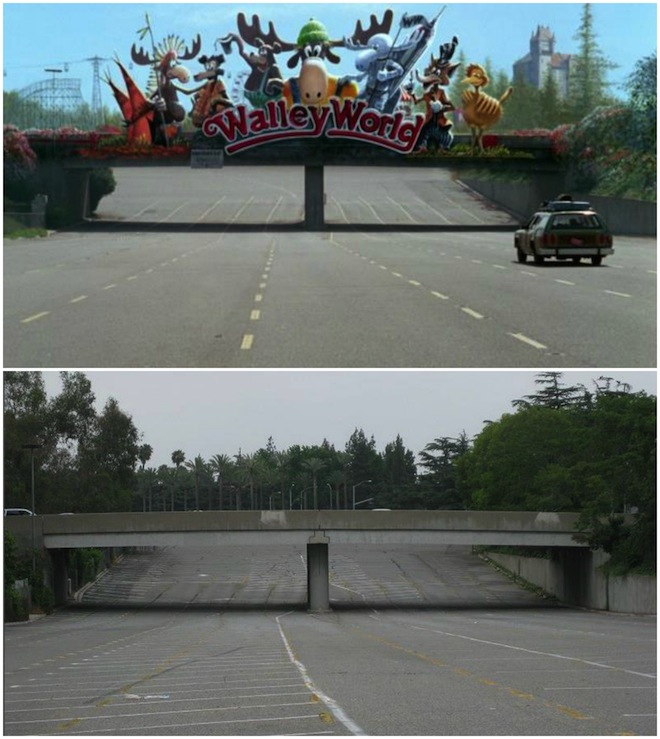 Tomorrow afternoon, thousands of Angelenos will embark on road trips in honor of Memorial Day. While I will not be joining them, it brings to mind the greatest road trip movie of all time (in my opinion, at least): the 1983 classic National Lampoon’s Vacation.

Not only have I watched the flick to the point that I have it memorized, but I have also visited several of its locations, many of which can be found right here in Los Angeles. While the Griswolds are shown journeying across the U.S. in their metallic pea Wagon Queen Family Truckster from Chicago to Southern California, filming largely took place in L.A., with a few scenes shot on location in Colorado and Arizona.

It’ as well-known fact that Six Flags Magic Mountain, located at 26101 Magic Mountain Parkway in Valencia, stood in for Walley World in the film’s closing sequence. What is less known, however, is that the now-famous ending, in which Clark W. Griswold (Chevy Chase), armed with a BB gun, forced security guard Lasky (John Candy) to take the Griswolds on rides, was a reshoot. The original ending involved Clark and family, livid over Walley World’s closure (“Moose out front shoulda told ya!”), driving to Roy Walley’s house, holding him hostage, and forcing him to entertain them by song and dance. The ending did not fare favorably with test audiences, so four months after the film wrapped, the cast reunited at Magic Mountain to shoot the ending that wound up onscreen. (In the intervening months, Anthony Michael Hall, who plays Rusty, clearly had a growth spurt, as he appears several inches taller here than in the rest of the flick.) Writer John Hughes later adapted the original ending for his 1989 hit Christmas Vacation.

The first time I visited Magic Mountain, I scaled the grounds looking for the large overpass that the Griswolds drove under in the movie. I was highly disappointed when a ride operator informed me that it was not located on the premises. Because that scene was shot as part of the original ending, it was filmed elsewhere—about 40 miles away, in fact. The entrance to America’s Favorite Family Fun Park can actually be found at the Santa Anita Park racetrack at 285 West Huntington Drive in Arcadia.

The Walley World overpass stands in a little-used portion of the southwest corner of Santa Anita’s parking lot, just south of the Westfield Santa Anita Mall. You can easily catch a glimpse of it when visiting the racetrack, or for free from the mall’s Huntington Drive entrance. The entrance gate where Clark famously punched Marty Moose in the nose is actually Santa Anita Park’s South Entrance gate. Matte paintings were used in both sequences to depict roller coasters in the background.

Whether travelling across the country this weekend (perhaps to see the second largest ball of twine), visiting an amusement park, or staying close to home, I hope this Memorial Day is one of your hap-hap-happiest yet.

Photos: A screen capture from National Lampoon’s Vacation (top), and a photograph of the Santa Anita Park overpass (bottom) taken in June 2009 by Lindsay Blake.