Home TV Scene It Before: The Sanderson House from The Grinder 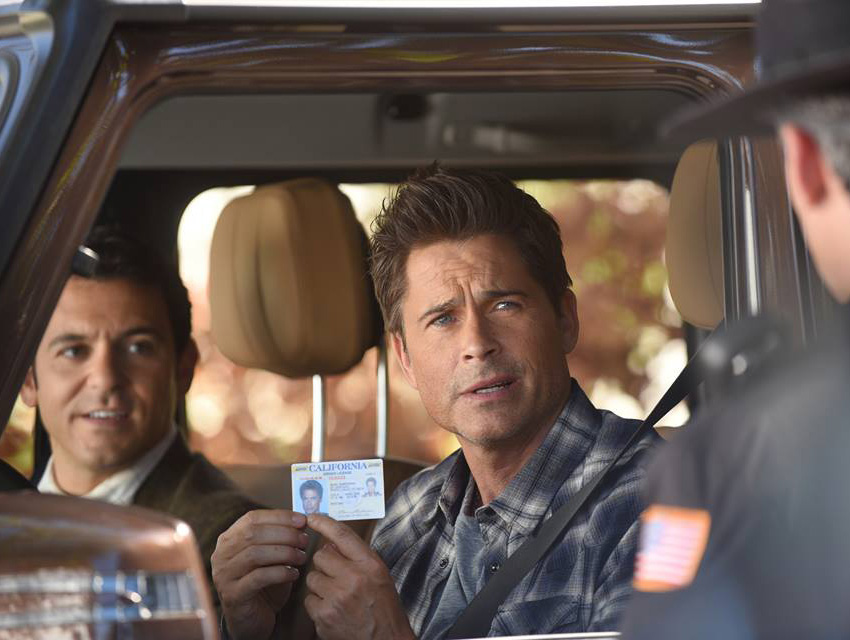 I am always a bit late to the game. Case in point: I was not a fan of Rob Lowe until a friend loaned me her copy of the actor’s 2011 autobiography, Stories I Only Tell My Friends. I still have some catching up to do (watching his ’80s movies and The West Wing are on my list), but I did dive into his freshman series The Grinder, which is easily my favorite new show of 2015.

The plotline centers around Dean Sanderson (Lowe), a Hollywood actor who returns to his hometown of Boise, Idaho to live with his brother, Stewart (Fred Savage), after his hugely popular television series The Grinder ends an eight-year run. Dean, aka “The Grinder,” may not be a lawyer (he only played one on TV), but that doesn’t stop him from thinking he can work at his family’s law firm, Sanderson & Yao.

The series is expertly written and perfectly cast. Lowe nails his over-indulged actor character, poking good fun at show business and Hollywood in the process, and Savage makes for a perfect foil. The rest of the cast, which includes William Devane as Dean Sanderson Sr., also shines. Rob’s oldest son, Johnowen Lowe, has a recurring role on the series as Joel Zadak, the boyfriend of Stewart’s daughter, Lizzie (Hana Hayes).

Though set in Idaho, The Grinder is shot entirety in Los Angeles. Stewart and his family’s picturesque two-story house can be found at 1678 Braeburn Road in Altadena.

I am very familiar with Braeburn Road, so I was able to track down the home fairly quickly after watching the show’s pilot episode. I used to live nearby and would frequently jog in the area, but I actually know the street best from its many onscreen appearances. (The Walsh family’s “Minnesota” house from Beverly Hills, 90210 is located at 1640 Braeburn, and my dad and I once spent several days watching the filming of a Season 8 episode of CSI: Miami take place in a fire-damaged home at 1838 Braeburn.)

Other filming locations include the AC Martin Jr.-designed Sunkist Building at 14130 Riverside Drive in Sherman Oaks, which stars as the Ada County Courthouse, and the building at 6739 Washington Avenue in Whittier, which features as the law offices of Sanderson & Yao.

In the pilot, Dean fishes with his father and brother at Whittier Narrows Recreation Area at 705 South Santa Anita Avenue in South El Monte, and Dean calls out Albert Krantz (Brian Huskey) outside of Merit Cleaners at 841 East Mariposa Street in Altadena.

The Fox network just ordered a full-season run of the show, and I can’t wait to see what’s in store for The Grinder and his family. If the early episodes are any indication, it is going to be a funny, melodramatic ride. As we learned in Season 4’s ninth episode, “Settle to the Metal,” The Grinder never settles!