Home Theater Scene It Before: The Orpheum Theatre from Pretty Little Liars 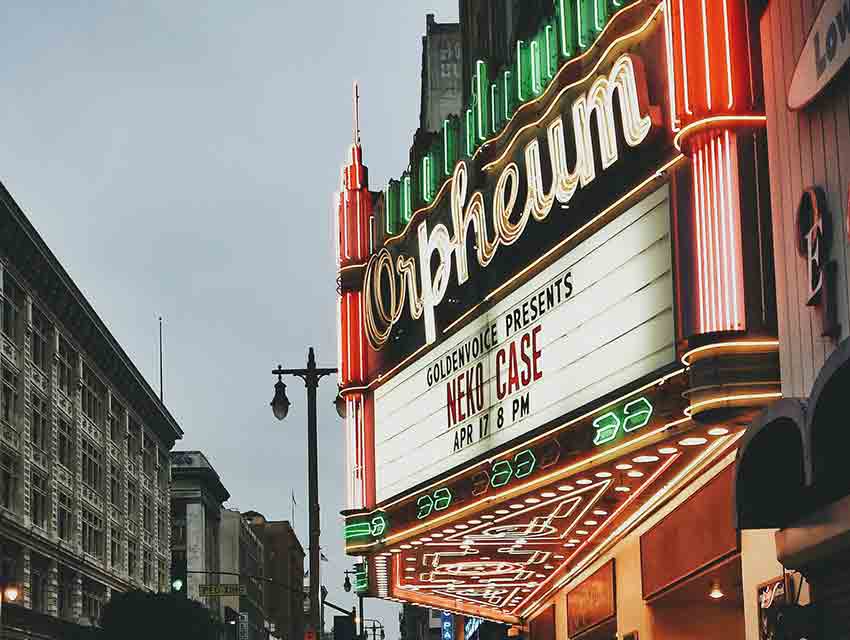 Earlier this year while my husband was away on a business trip I found myself alone, bored, and perusing Netflix. Somehow I landed upon the ABC family series Pretty Little Liars and decided to give it a go. Ten minutes in I was hooked. One episode in I was a full-blown addict. I ended up blowing through the series, and got completely caught up on seasons 1 through 5 before Tuesday’s Season 6 premiere. It did not disappoint.

In addition to binge watching, I also did some binge-investigating into Pretty Little Liars’ filming locations. While the pilot episode was shot in Vancouver, filming moved to California once the series got picked up. Upon arriving in L.A., the cast and crew set up shop at Warner Bros. Studio in Burbank, and they haven’t left since. Really. While the production makes wide use of the WB backlot (those locations are chronicled here), it leaves the studio only rarely. In the five seasons the show has been on the air, only a handful of scenes have been filmed offsite. By my count, a scant four outside locations have been used.

The Toluca Lake Tennis Club, which sits across the street from Warner Bros. on Forest Lawn Drive, appears as the Hastings family’s tennis club in the Season 1 episode “Reality Bites Me.” In the Season 2 episode “The Devil You Know,” the Liars head to Mountain View Cemetery in Altadena to attend Ian Thomas’ (Ryan Merriman) funeral. Griffith Park is where Jenna Marshall (Tammin Sursok) meets up with “A” and where Mona Vanderwaal (Janel Parrish) is finally, well, unmasked in the Season 2 episode “UnmAsked.”

The location that piqued my interest most, though, was the Fitzgerald Theatre in New York, where the Liars hid out in the Season 5 opener, “EscApe from New York.” While watching, I became mesmerized by the theatre’s opulent marble lobby and circular stained glass ceiling panels. It took a bit of cyber-sleuthing to track it down, but I eventually discovered that filming had taken place at the Orpheum Theatre at 842 S. Broadway in downtown L.A.

The Orpheum Theatre was designed in 1926 by architect G. Albert Lansburgh. Originally a vaudeville venue, the lavish structure was taken over by Joseph Kennedy (yes, that Joseph Kennedy) in 1929 and turned into a movie theatre. Live acts were eventually brought back to the site, though; Judy Garland, Bob Hope, Louis Armstrong, Lena Horne, Ella Fitzgerald, Aretha Franklin, and Duke Ellington have all graced its stage.

In 2001, the Orpheum underwent an extensive renovation process to return it to its original grandeur. Today the theatre serves as a concert and special events venue and a filming location. Just a few of its major onscreen appearances include the films Last Action Hero, Transformers, Alvin and the Chipmunks, Barton Fink, Ed Wood, The Replacement Killers, The Curious Case of Benjamin Button, J. Edgar, The Artist, and Hitchcock.

Though the Orpheum is not open to the public, its stunning interiors can be seen by attending a concert there or via the Los Angeles Conservancy Broadway Historic Theatre and Commercial District Walking Tour. Now that the summer months are upon us, I can’t think of a better way to spend a day than taking in some sights on foot. I’ve already purchased my ticket.