Home Film Scene It Before: “The License to Drive” DMV 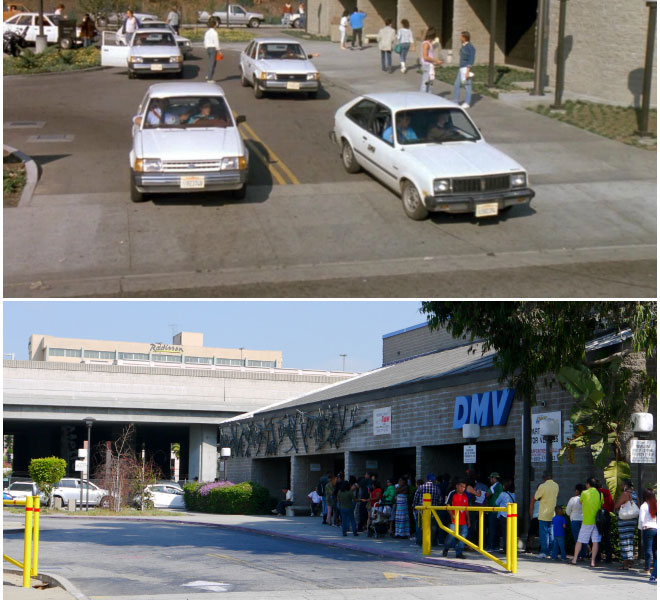 Los Angeles magazine is celebraring the ‘80s this month by dedicating its most recent issue to the era of leg warmers, jelly bracelets, and acid-wash jeans.  Because the decade was my favorite (I am nothing if not an ‘80s child), I thought I would propagate the theme by writing about a location from one of my most beloved movies from the neon age, License to Drive.

When License to Drive first hit theatres in 1988, I was still in elementary school and what felt like light years away from getting my driver’s license. In fact, I had not given a second thought to cars or driving.  But when I saw the movie that summer, my horizon changed. Corey Haim, who played protagonist Les Anderson, became my latest Hollywood crush, and Heather Graham, in one of her first leading roles as Mercedes Lane, became my new idol. Even though I was 11 at the time, I could think of nothing other than owning a white VW Cabriolet convertible like the one Mercedes drove once I saw the flick.

The movie had such an effect on me that when I finally did get my license five years later, I was still fixated on Cabriolets and was lucky enough to be gifted one on my 16th birthday.  (Thank you, Mom and Dad!)  Even when I moved to L.A. in 2000, 12 years after License to Drive came out, I was still obsessed with the flick and immediately began tracking down locations from it. I found pretty much all of them, but my favorite has to be the DMV office where Les took the written portion of his driving test and (spoiler alert!) failed. (“God giveth and the DMV taketh away!”) That failure didn’t stop him from taking out his dream girl later that night, though. (“An innocent girl, a harmless drive. What could possibly go wrong?”)

I was absolutely floored to discover that the DMV office–located at 3615 Hope St. in the Historic South-Central area of L.A.–looks exactly the same today as it did onscreen in 1988, although the area surrounding it has changed considerably. When I visited the site recently and saw countless teens standing in line awaiting their own driving tests, I couldn’t help but wonder if any realized the movie history that had taken place there 26 years ago. Sadly, most probably have never even heard of License to Drive and, sadder still, likely have no idea who the Two Coreys are. Just another reason I am thankful to have grown up during history’s most colorful decade. Long live the ‘80s!

Photos: A screen capture from License to Drive (top) and a photograph of the DMV office taken in June 2014, courtesy of Lindsay Blake (bottom).

At a Chaotic Screening, Corey Feldman Debuts His Doc About Hollywood Sex Abuse