Home Film Scene It Before: The “Karate Kid” Dojo 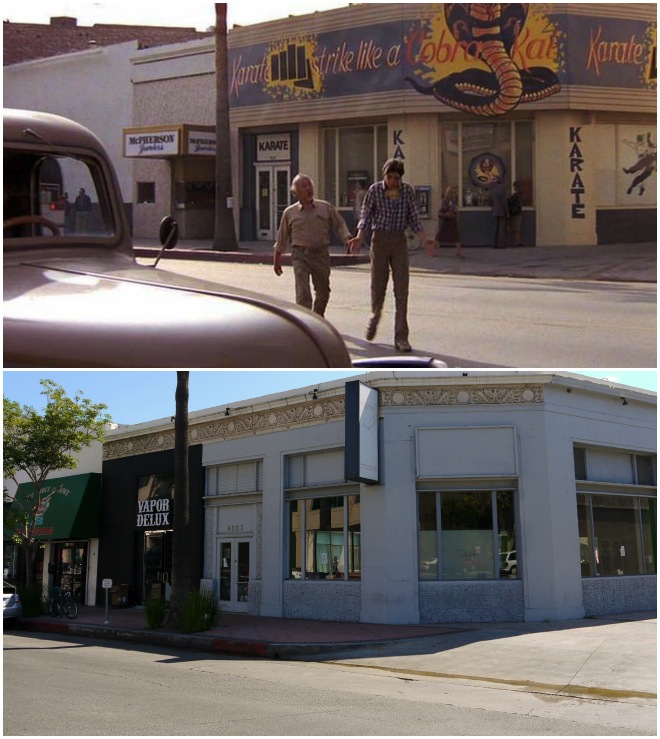 This upcoming Sunday, June 22, marks the 30th anniversary of the original release date of The Karate Kid. I had never actually seen the 1984 classic until this past January (I know, I know—blasphemy). As soon as I did, though, I became hooked and immediately began researching its locations, the vast majority of which are well-documented online.

A few weeks ago, while doing some stalking in North Hollywood with a good friend, I happened to find myself standing across the street from the Cobra Kai dojo (well, one of them at least). For whatever reason, producers chose to “sweep the leg” (of the audience) by using two different buildings to masquerade as the dojo. The first spot, which appeared in the scene in which Daniel (Ralph Macchio) visited his mother, Lucille (Randee Heller), at work and informed her that he wanted to start taking karate lessons, can be found at 5376 Wilshire Boulevard. The storefront was only shown in  limited side-view through the window of the restaurant where Lucille worked in the scene (now a wig shop).

When Daniel goes to visit that same dojo a few scenes later with Mr. Miyagi (Pat Morita), it has miraculously shifted 10 miles to the north. That location, which is an actual martial arts/body fitness center, can be found at 5223 Lankershim Boulevard in North Hollywood. It was at the Lankershim dojo that Mr. Miyagi challenged the Cobra Kais to a tournament fight against Daniel, after first making them promise that they would stop bullying him for the next two months. The real-life interior of the property was also used in the scene, and it miraculously looks almost exactly the same today as it did 30 years ago.

The same spot was also featured in Karate Kid III, as well as in another ’80s classic, Say Anything, in which it masqueraded as the Seattle-area dojo where Lloyd Dobler (John Cusack) taught karate—and got a broken nose. The location is currently home to the Body Theory Fitness Center, which hosts daily exercise courses, including Drenched Cardio, Drenched Boxing and Abs, and Butt Bootcamp. There is not a knitting class to be found on the schedule.

Photos: A screen capture from The Karate Kid (top); a photograph of the North Hollywood dojo location (bottom) taken by Lindsay Blake in May 2014.