Home Film Scene It Before: The Gilmore Gasoline Filling Station from “L.A. Story” 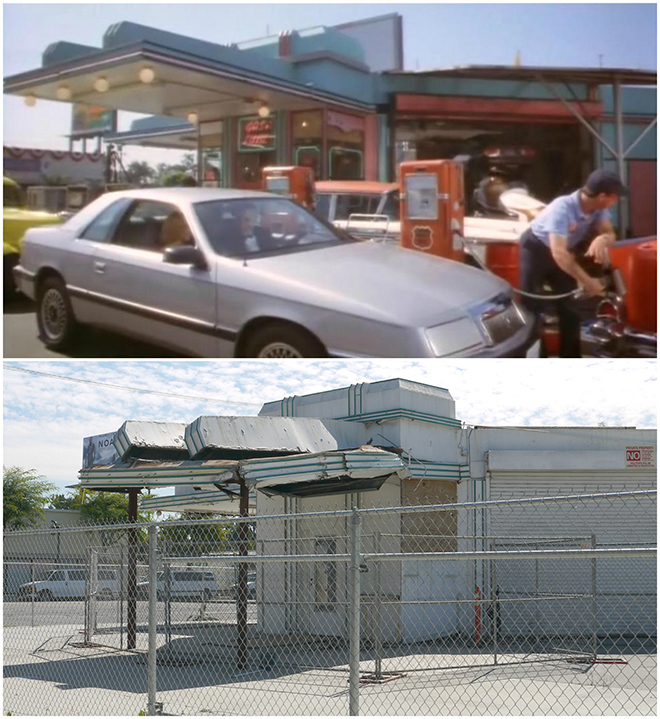 Nothing quickens my pulse quite like an abandoned property. Wait, I take that back—there are a few things, including filming locations (obviously) and Starbucks coffee. So it thrilled me to no end to learn (via Neal Broverman’s recent L.A. Driver post on this here site) that the Seattle-based coffee giant is looking to turn the now-deserted gas station from L.A. Story into a drive-through.

Constructed in 1935, the Gilmore Gasoline Filling Station at 859 North Highland Avenue in Hollywood is an Art Deco marvel. Or at least it was. Today, the site is a sorry shadow of its former self. Engineer R.J. Kadow designed the double-canopied structure for the Gilmore Oil Company, a conglomerate founded by one of L.A.’s most influential families. The Gilmores also gave us Gilmore Bank, the Farmers Market at 3rd and Fairfax, and Gilmore Field, Hollywood’s now-defunct minor league baseball park. When the Gilmore Oil Company was sold in 1945, the Gilmore Gasoline Station was unloaded along with it. The site proceeded to go through a succession of different owners, until the 1990s when it was vacated by its then tenant and left empty. During the early years of its vacancy, the station popped up in a couple of films.

In L.A. Story, the Gilmore Gasoline Station was where wacky weatherman Harris K. Telemacher (Steve Martin) stopped to fill up with paramour Sara McDowel (Victoria Tennant) prior to attending a fundraising event. He asked for the “full-service” treatment, which includes a tank of gas, a car wash, and removal and exchange of all four tires. The station was also where Reggie Hammond (Eddie Murphy) informed Jack Cates (Nick Nolte) of the location of the stolen money in the 1982 comedy 48 Hours.

Despite being named a historic-cultural monument in 1992, the station was left to dilapidate and today is in a sorry state of disrepair. I am thankful that Starbucks is considering rehabbing the place. While I don’t typically endorse plastic surgery, the Gilmore Gasoline Filling Station is one Angeleno in desperate need of a face lift.

Photos: A screen capture from L.A. Story (top) and a photo of the location taken in March 2014, courtesy of Lindsay Blake (bottom)