Home Film Scene It Before: The Flower Shop from “Valentine’s Day” 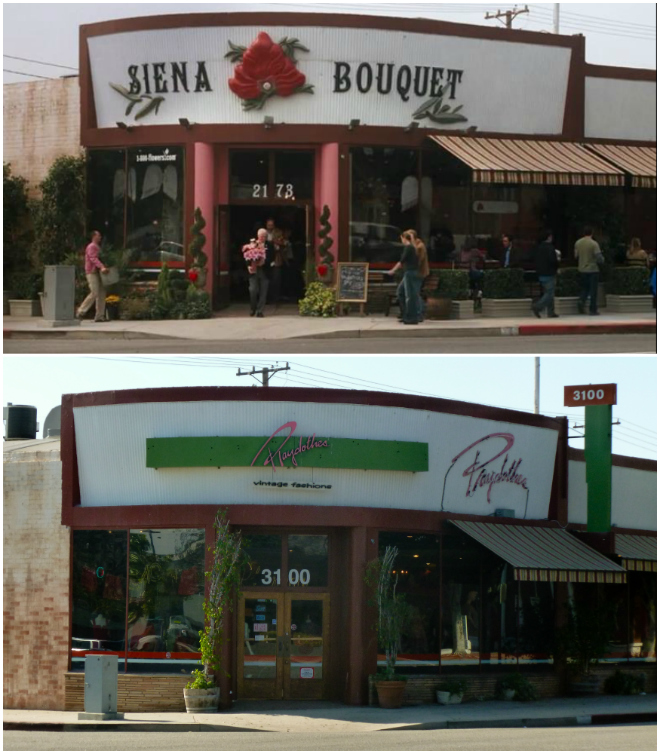 Love is in the air, and I figured what better way to celebrate than with a visit to one of the locations featured in Garry Marshall’s 2010 romantic comedy, Valentine’s Day? As a coffee addict myself (you’d be hard-pressed to find me without a cup of joe in hand), I absolutely loved Siena Bouquet, the florist/coffee shop owned by Ashton Kutcher’s Reed Bennett in the movie. I’m of the opinion that there is no establishment that shouldn’t include an espresso bar.  In real life, though, no java—or flowers—can be found at the space, and patrons are far more likely to drop in on Halloween than Valentine’s Day.

A former print shop that was vacant at the time of the filming, the storefront at 3100 W. Magnolia Boulevard in Burbank has since been occupied by Playclothes, a fabulous vintage attire/furniture emporium. Thankfully, the exterior design of the building still looks much the same as it did while masquerading as the flower shop in Valentine’s Day—it is only the merchandise that has changed. The whimsical, 4700-square-foot shop currently features room after room of authentic clothing, jewelry, décor, and furnishings from the 1930s through the ’80s.

Playclothes has another claim to fame besides its onscreen appearance in 2010. Since its inception over 20 years ago (it was originally located in Studio City), the boutique has been a favorite of Hollywood costume designers and set decorators and has provided vintage wares for such productions as Catch Me If You Can, Divine Secrets of the Ya-Ya Sisterhood, Boardwalk Empire, and That ’70s Show.  According to a 2013 Los Angeles Times article, the store sold more than $70,000 worth of items to Mad Men during its first season alone! I could easily get lost in the rows upon rows of antique tulle and lace. The only thing that’s missing, sadly, is a coffee bar.

Angelinos looking for a last-minute flower purchase can find them at another Valentine’s Day location—the Original Los Angeles Flower Mart at 754 Wall Street. The five-acre (yes, five acre!) downtown L.A. marketplace (which is open daily to the public) is comprised of approximately 50 vendors selling more than 125 different varieties of flowers—everything from peonies to petunias—at prices that can’t be beat. With the countless arrangements on display (all akin to works of art) and the fragrant scent of roses that lingers over the entire site, the Flower Mart is another place that I could easily get lost in.

Photos: A screen capture from ‘Valentine’s Day’ (top) and a photograph of the location taken in February 2014, courtesy of Lindsay Blake (bottom).