Home TV Scene It Before: The Disney Garage From the Cadillac CTS Sedan Commercial 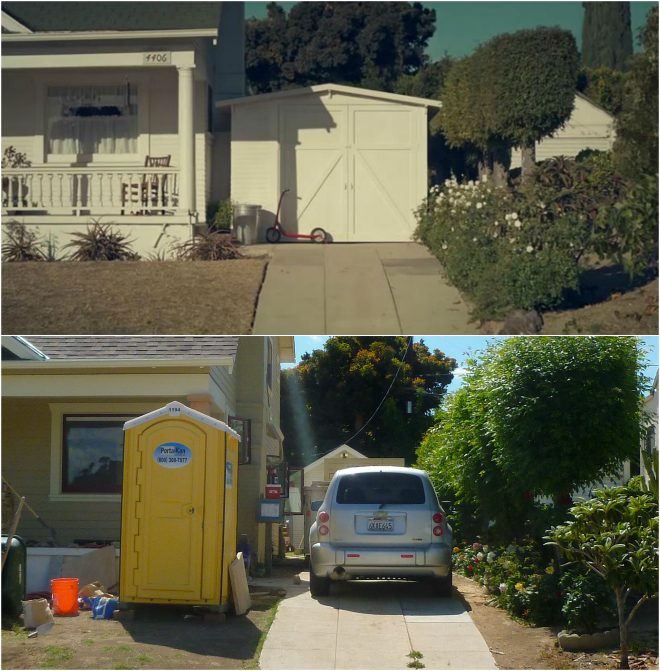 I am an equal-opportunity stalker. Not only do I love seeing filming locations in person, but I also enjoy visiting historic sites and pop-culture landmarks. So I was thrilled when the garage that served as Walt Disney’s first Los Angeles studio was included in the 2014 Cadillac CTS Sedan commercial titled “Garages.” The bit, which is narrated by Desperate Housewives’ Neal McDonough, chronicles the humble garage beginnings of several luminaries and business empires, including Hewlett-Packard, Amazon, the Wright Brothers, and Walt Disney.

Walt first moved to Southern California in the summer of 1923. He settled into his Uncle Robert’s house at 4406 Kingswell Avenue in Los Feliz and, during his stay, turned the property’s small one-car garage into a workshop, where he built a cartoon stand out of plywood boxes and scrap lumber. It was in the garage that Disney began producing an animated joke reel for the Pantages movie theatre chain. The shorts never saw the light of day, though. Once the animator learned that a pilot he had created prior to moving to L.A. had been sold to a distributer, he abandoned the project—and the garage. In October 1923, within a few days of the sale, Disney rented the back room of a real-estate office just down the street from his uncle’s house on Kingswell, and the Walt Disney Company was born. Four short months later, he moved to his own space in the adjoining storefront at 4649 Kingswell and it is this location that the Disney Company officially recognizes as Walt’s first studio. Today, that site is a copy shop, but its former tenant has not been forgotten. Photographs of a young Disney, along with a myriad of Disney memorabilia, currently line the store’s walls.

Uncle Robert’s garage, on the other hand, was almost lost to the ages. One fateful day in 1981, a puppeteer/Disneyphile named Paul Maher happened to be looking at photographs with a historian friend when he came across one of the Disney garage. Maher wanted to see the landmark property in person, so he tracked it down the next day (a man after my own heart). Uncle Robert had since passed away and his home sold to a woman who had plans to lease it out. Maher found the dilapidated bungalow undergoing a remodel and learned from a worker that the garage was set to be demolished. He immediately contacted the new owner, who knew nothing of the home’s historic past, and wound up not only leasing the residence, but purchasing the garage.

Maher fell upon hard times about six months later and put the 12 x 18-foot garage up for auction. It was purchased by a group of eight people, who later dubbed themselves “Friends of Walt Disney,” for $8,500 and eventually donated to the Stanley Ranch Museum at 12174 Euclid Street in Garden Grove, where it stands today. The museum, which is located about three miles south of Disneyland, is open the first and third Sunday of each month from 1 to 3:30 p.m.

Upon first seeing the Cadillac commercial, I assumed that Uncle Robert’s actual former home had been used in the footage, with a replica garage built onsite for the shoot. A second, closer watch revealed that the exterior of the residence pictured in the ad did not match that of 4406 Kingswell Drive. As it turns out, a different property was used in the production and a prop garage constructed in front of that home’s actual garage for the filming. The imitation garage wasn’t an exact match, though. The plank wood doors of the real structure (which you can see in its original state and now) are positioned on the left-hand side, while the doors of the commercial garage are on the right. Otherwise, it’s a pretty spot-on recreation. The commercial’s creators even paid homage to Walt’s real-life former address by replacing the number plate of the home used in the shoot with one reading 4406.

The residence used in the ad, which is currently undergoing a renovation, is also a Los Feliz dwelling (at 2223 Nella Vista Avenue) and is located just a mile north of Disney’s actual former home. I guess it really is a small world after all.

Photos: A screen capture from the Garages commercial (top) and a photograph of the house used in the ad (minus the fake garage) taken in April 2014, courtesy of Lindsay Blake (bottom).