Home TV Scene It Before: The Coffee Roaster from The Simpsons 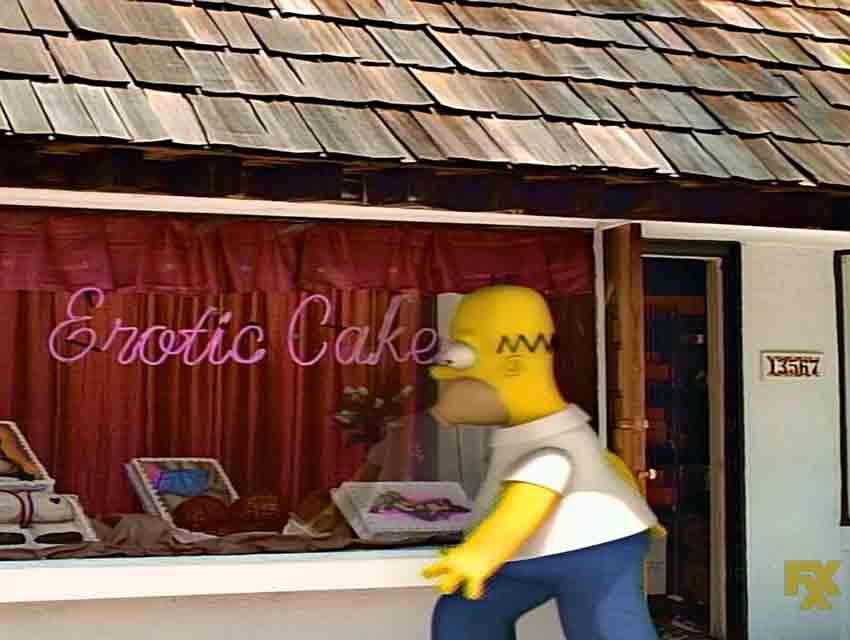 A screen grab of "The Simpsons"

I know what you’re thinking: The Simpsons is an animated series and does not showcase actual locations. “Treehouse of Horror VI,” though, featured the show’s first-ever live-action sequence shot on a quaint stretch of Ventura Boulevard in Sherman Oaks. The episode, which debuted in 1995 and was nominated for a Primetime Emmy Award, consists of three story segments. The live-action scene appears in the show’s final segment, “Homer3” (or “Homer Cubed”).

In the segment, Homer Simpson (voiced by Dan Castellaneta), attempts to hide from Marge’s sisters behind a “whatchamacallit case” (that’s a book case in Homer speak). While moving it, he finds a portal to a 3D world and, figuring whatever he encounters there has to be better than an evening with Patty and Selma, heads on in. Trouble ensues. While exploring, Homer accidentally creates a black hole (D’oh!) through which he is sucked out of the 3D world and into a real world back alley dumpster. That dumpster was in the parking lot behind Izakaya M Robata & Sushi Bar at 13573 Ventura Boulevard. Though the dumpster is no longer there, a shed that’s visible behind it in the scene still is.

The shop’s shingled roofline has been covered over with an awning, but otherwise the exterior looks very much the same as it does in “Treehouse of Horror VI.” Eagle-eyed fans will notice that the address placard and entrance door remain untouched from their onscreen appearance.

Though Homer would be disappointed to learn that no lewd pastries are sold on the premises, The Coffee Roaster does serve an offering of tasty muffins, croissants, and breads.

Lindsay Blake is an actress, writer, celebrity admirer and Los Angeles enthusiast who contributes to CityThink each week. Her true love is filming locations, and she founded the Web site IAMNOTASTALKER in 2007 to document her vast findings on the subject. For more “stalking” fun, you can follow Lindsay on Twitter, Facebook and Instagram.