Home TV Scene It Before: The Church in “How I Met Your Mother” 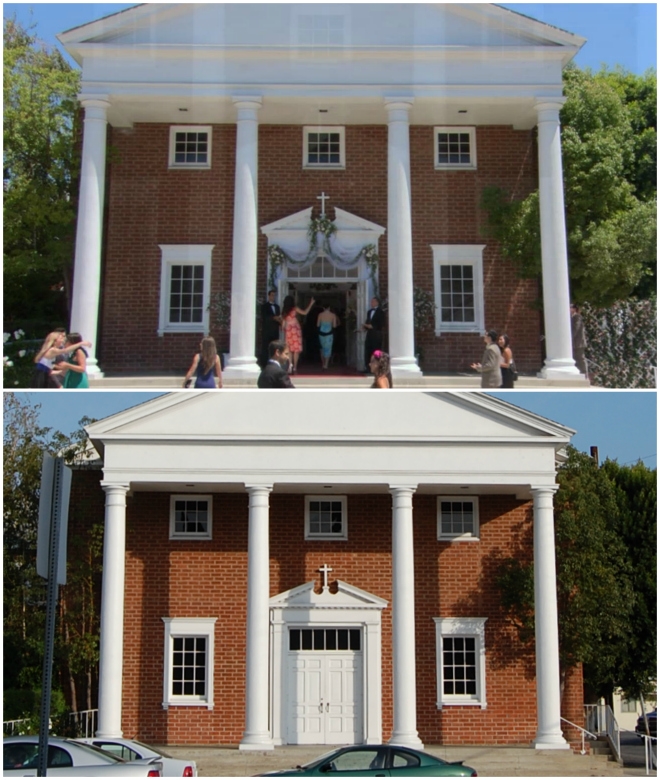 Don’t even get me started on the How I Met Your Mother finale! It was not legen–wait for it–dary. After nine years of yellow umbrellas, blue French horns, and slutty pumpkins, I expected more. Why hire such an enchanting actress to play The Mother (Cristin Milioti) and then spend an entire season making the audience, not to mention Josh Radnor’s Ted, fall in love with her, when (SPOILER ALERT) she was fairly quickly brushed aside? And why devote a season-and-a-half leading up to the wedding of Barney (Neil Patrick Harris) and Robin (Cobie Smulders) if the two were going to wind up divorced 10 minutes into the finale? As I said, don’t get me started.

The one redeeming thing about the failed Stinson/Scherbatsky nuptials was that they unfolded at a location I recognized. The First Congregational Church in the fictional town of Farhampton was actually the First Christian Church of North Hollywood, located at 4390 Colfax Avenue in Studio City. While How I Met Your Mother was set in New York, all filming took place in Los Angeles. Producers did use an authentic East Coast locale—the Castle Hill Inn at 590 Ocean Drive in Newport, Rhode Island—for establishing shots of the inn where the reception took place.

First Christian Church of North Hollywood was featured several times on HIMYM, beginning with the season-six opener, “Big Days.” It was also where Victoria (Ashley Williams) would have married Klaus (Thomas Lennon) in season eight’s “Farhampton” if only she hadn’t run off with Ted. Only the exterior of the Colonial-style church was used on the series, though. Filming took place on a soundstage modeled after the church’s real-life interior.

Thanks to its Anywhere, U.S.A., aesthetic, the First Christian Church of North Hollywood has long been a popular filming locale and has appeared onscreen countless times since it was originally constructed in 1950. Not only was it where Phyllis Lapin (Phyllis Smith) married Bob Vance (aka Robert R. Shafer)  of Vance Refrigeration on The Office, but it was featured regularly as the Camden family’s parish on 7th Heaven, as well. The property also appeared in Indiana Jones and the Kingdom of the Crystal Skull, Eagle Eye, The Birdcage, What About Bob?, Parks and Recreation, Desperate Housewives, and Katy Perry’s “Hot & Cold” music video.

While I still have a bitter taste in my mouth over the HIMYM finale, touring 20th Century Fox studios, where the series was shot, remains on my bucket list. (Sadly, it’s closed to the public.) Seeing the New York back lot where Barney sang “Nothing Suits Me Like a Suit” and the exterior of MacLaren’s Pub (I just found out the bar was based on a real NYC watering hole would be simply fabu–wait for it–lous!

Photos: A screen capture from How I Met Your Mother (top) and a photograph of the location taken in 2008 courtesy of Mike Flores.