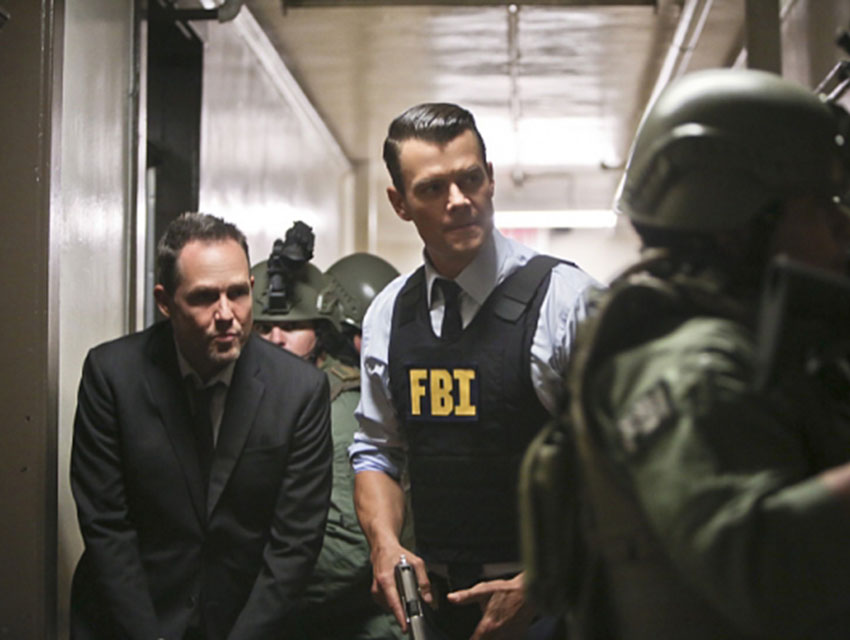 The executives at CBS deserve a strongly worded letter regarding the recent cancellation of Battle Creek. The mid-season replacement series starring Josh Duhamel as golden FBI agent Milt Chamberlain and Dean Winters as his hapless partner, Russ Agnew, was the best new show of 2015—in my opinion at least. Yet, after just 13 episodes it was given the yellow slip. This past Sunday’s episode was the series’ last, which means that audiences will never find out the fate of Russ and Holly’s (Aubrey Dollar) burgeoning relationship. Humph!

Though set in the real life city of Battle Creek, Michigan, the show was filmed exclusively in Los Angeles. I was lucky enough to happen upon the filming of an episode in Pasadena before Battle Creek hit the air (that episode was “Man’s Best Friend,” and it was shot at Madison Elementary School at 515 Ashtabula Street). The cast and crew were some of the friendliest I’ve ever encountered—and I’ve encountered quite a few—which makes the cancellation all the more heartbreaking.

Battle Creek made use of several SoCal locales during its short life span, including Vivian’s Millennium Café in Studio City (which Leah Remini’s family owns), Patys Restaurant in Toluca Lake, and Monrovia Canyon Park in Monrovia.

The location featured most often on the show, though, is Security Trust & Savings Bank’s former Highland Park branch at 5601 N. Figueroa Street, which stands in for the Battle Creek Police Department/FBI field office. The Avenue 56 side of the building is shown on the series but for whatever reason the front exterior is not.

The Renaissance Revival-style structure was designed in 1923 by John and Donald Parkinson, the father-and-son architect team also responsible for Union Station, Los Angeles City Hall, and Bullocks Wilshire (now Southwestern Law School). The Parkinsons built several very similar looking bank branches for the Security Trust chain in Los Angeles during the 1920s. Many of them have since been demolished, but a virtual twin to the Highland Park structure stands at 5303 Lankershim Boulevard in North Hollywood.

At one point in time, the former bank, which was deemed Los Angeles Historic-Cultural Monument #575 in 1993, was set to become a community center, but it currently sits vacant and is often used for filming. In addition to Battle Creek, the building appeared in a Season 1 episode of Leverage.

I haven’t had much luck with television shows during the 2014-15 season. Most of my new favorites– Selfie, A to Z, and now Battle Creek—have been canceled. Adding to my disappointment is the news that the second season of Secrets & Lies will focus on an entirely new set of characters when it finally airs in 2016. No more Ryan Phillippe or Dan Fogler? Again, humph!

At least I have fond memories of my day spent on the Battle Creek set to lighten the blow.