Home TV Scene It Before: The Bar From “New Girl” 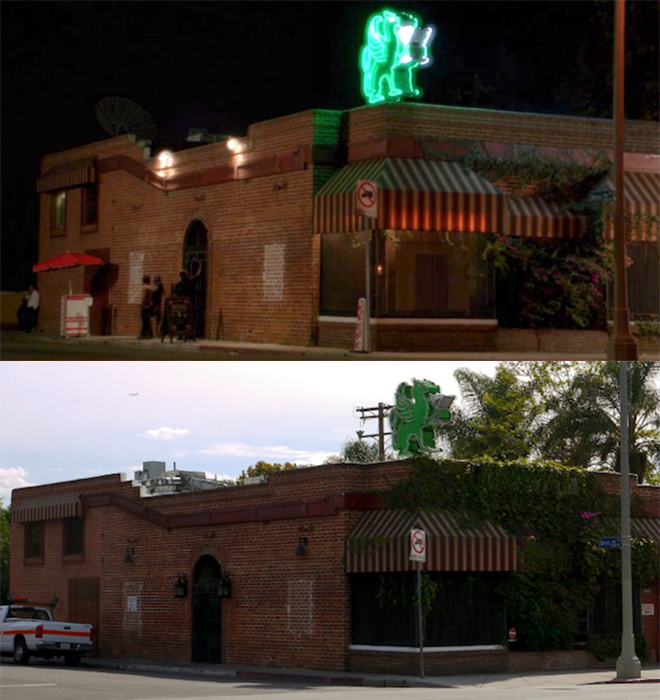 My must-see TV list is long (embarrassingly so) and includes: The Real Housewives of Beverly Hills, Modern Family, Cougar Town, The Soup, Rizzoli & Isles, The Good Wife (although that one may soon be removed due to an unwelcome recent development), The Big Bang Theory, Parks and Recreation, Person of Interest, The Bachelor (as well as all of its subsidiaries), Vanderpump Rules, The Mentalist, and Perception. The most recent addition to that list—and quite possibly my favorite of all—is the Fox series New Girl. I have, of course, tracked down and visited the vast majority of locales featured on the show, which is set in Los Angeles, but the one that continually eluded me was the exterior of the bar where Nick (Jake Johnson) and now Cece (Hannah Simone) work, and where the rest of the gang regularly hangs out. Then, a couple of weeks ago, fate stepped in when I happened to randomly drive by the place while heading to lunch with a friend. I immediately recognized the brick façade and green neon signage of The Griffin, located at 3000 Los Feliz Boulevard in Atwater Village, and pulled over to snap some photos.

It’s only the exterior that appears on New Girl—the site used for the interior can be found about six miles away and is one of Los Angeles’ most-historic restaurants, not to mention my favorite SoCal eatery. The Prince, located at 3198 ½ West 7th Street in Koreatown, was originally founded in 1927 as the Windsor Inn in the courtyard of the Windsor Apartments. In 1949, the establishment was moved indoors to a dimly lit space with red wallpaper, wood-panel detailing, and large leather booths. When new owners took over in 1991, they changed the watering hole’s name to The Prince and its offerings to Korean fare, but the interior was largely left intact. Walking into The Prince today is like stepping back in time 60 years, and eating there was one of my favorite dining experiences ever, thanks to both the ambiance and the food, which is delicious.

While the cast and crew of New Girl filmed on location at The Prince during the series’ inaugural season, the bar’s interior was recreated on a soundstage at 20th Century Fox Studios for all subsequent filming, so these days there’s no chance of bumping into Winston, Schmidt, or Jess there, sadly. But New Girl is hardly the first production to be lensed at The Prince. The eatery has also popped up in such movies as Chinatown, Thank You for Smoking, and Crank, as well as in episodes of Mad Men, Criminal Minds, and Prime Suspect, just to name a few. If you happen to visit, I highly recommend the signature dish, Korean-style deep-fried whole chicken. Just don’t forget to order a side of chut-a-ney.

Photos: A screen capture from a season-two episode of New Girl (top) and a photograph of The Griffin taken by Lindsay Blake in February 2014 (bottom).