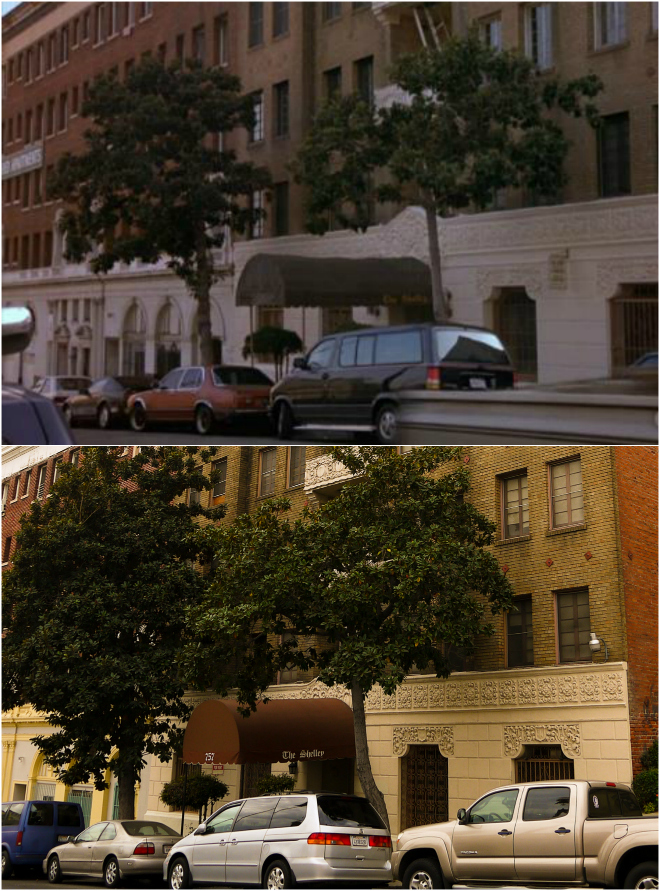 Growing up, I never missed an episode of Seinfeld, so I was delighted to see Jerry Seinfeld and Jason Alexander reprise their roles from the iconic television series about nothing for a Super Bowl XLVIII commercial. The ad, which promoted Jerry’s current Crackle show, Comedians in Cars Getting Coffee, was filmed in New York, where the series (1989-1998) takes place and where virtually all of its locations can be found—all except one, that is. The apartment building in which Jerry, Kramer (Michael Richards), and Newman (Wayne Knight) lived, which also served as the headquarters of Vandelay Industries (“And you want to be my latex salesman!”), is in Los Angeles. Said to be at 129 W. 81st Street on Manhattan’s Upper West Side, the site actually stands about 2,500 miles west at 757 S. New Hampshire Avenue in Koreatown.

The five-story building, built in 1928, is known as the Shelley in real life. It was one of the very first places I ever “stalked” upon moving to Los Angeles in 2000 (I found the address in a tour book) and remains among my favorites. Despite virtually no changes to its façade since filming 25 years ago, the Shelley is oddly unrecognizable. One could easily pass by the structure and remain completely unaware of the significant role it played in ’90s television. I think this is due to the fact that the full exterior was rarely shown on Seinfeld. Instead, establishing shots were typically tight: the front door, a bank of third-story windows, the awning, yada yada yada. Once the property is viewed through a camera lens, though, it instantly jogs the memory—so much so that you can almost hear the familiar bass synth of the show’s theme song in your head. You might even get a hankering for pretzels (not that there’s anything wrong with that).

Photos: A screen capture from a season four episode of ‘Seinfeld’ (top) and a photograph of the Shelley taken in November 2013 by Lindsay Blake (bottom).