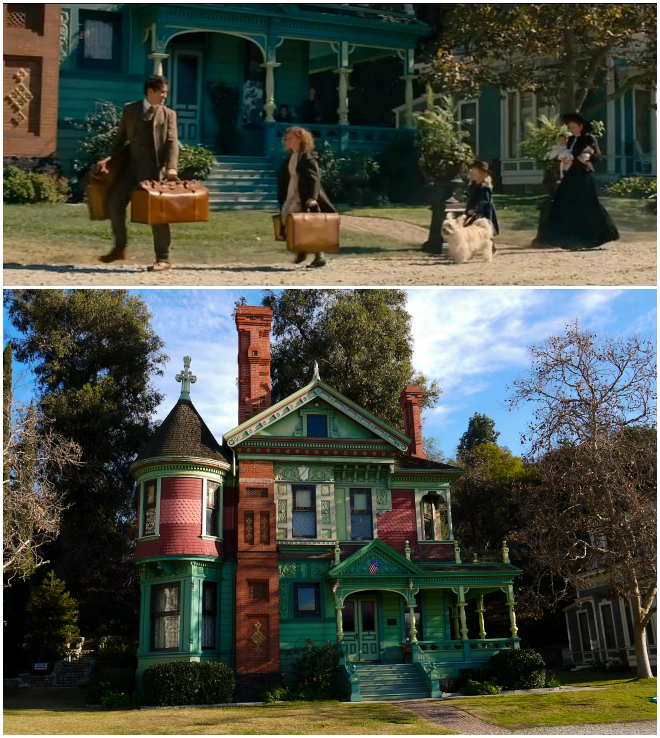 As a diehard fan of the 1964 film Mary Poppins, I was thrilled to learn that a movie about the making of this classic was in the works. Saving Mr. Banks, which opened in theaters in December, did not disappoint. Tom Hanks and Emma Thompson (as affable Walt Disney and prickly Poppins author P.L. Travers, respectively) were particularly mesmerizing, and I was shocked to hear neither name mentioned when the Oscar nominees were announced a few weeks ago. I was also surprised—and delighted—to discover that, despite being partially set in Australia, the vast majority of filming took place right here in Southern California.

I immediately recognized the dollhouse-style Victorian that young Travers (Annie Rose Buckley) and her family had to vacate towards the beginning of the movie as Hale House, located at the Heritage Square Museum (3800 Homer Street) in Montecito Heights. The dwelling has been featured in countless publications over the years, and its colorful façade is impossible to forget. I had never seen it in person, though, so I ran right out to the do so last month.

Heritage Square Museum was established in 1969 as an architectural sanctuary for 19th-century houses that might have otherwise been demolished. After rescuing these significant residences from the wrecking ball, the staff transported them to the ten-acre site for painstaking restoration.

The architectural masterpiece that is Hale House was originally situated at the base of Mount Washington in Highland Park. The residence went through a succession of owners following its 1887 construction before being purchased in the early 1900s by James G. Hale and his wife, Bessie, for whom the structure is now named. James passed away in 1921, and Bessie followed in 1967, at which time title of the property was deeded to her niece, Odena Johnson. Wanting to rid herself of the home, Johnson immediately set about selling it to a developer, who had plans to demolish it in order to make way for a gas station. Thankfully, preservationists stepped in and the house was declared a Los Angeles Historic-Cultural Monument and later listed on the National Register of Historic Places. Johnson wound up selling the exquisitely crafted Victorian to the Cultural Heritage Foundation for a dollar, at which time it was transported to Heritage Square. With its stained glass windows, intricate carvings, corner turret with copper fleur-de-lis, and towering brick chim chim-in-ey (chim chim cher-oo!), it is the grande dame of the entire site.

The museum includes seven other historic structures and one permanent exhibit, all of which can be viewed via guided tours (docents wear full period clothing!) every Friday through Sunday from 11:30 a.m. to 4:30 p.m. Admission is $10.

Photos: A screen capture from the “Saving Mr. Banks” trailer (top) and a photograph of the Hale House in January 2014, courtesy of Lindsay Blake (bottom).