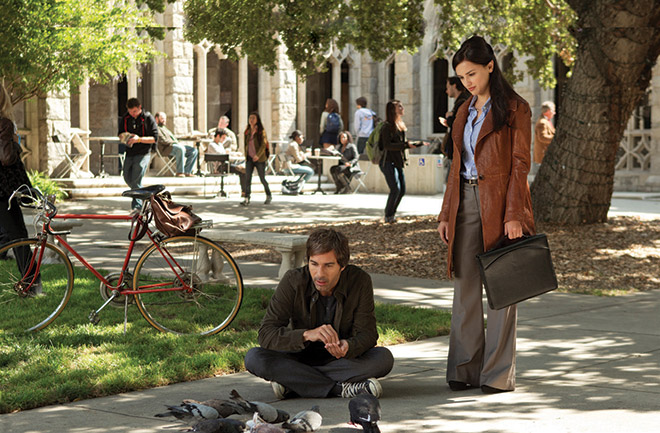 When Eric McCormack’s idiosyncratic neuropsychiatrist, Dr. Daniel Pierce, teaches a class on TNT’s Perception, he’s actually schooling viewers on local geography. The series (whose third season premieres June 17) is set at a fictional university in Chicago, but filming takes place on the grounds of Pasadena’s All Saints Church. The show’s location isn’t the only one worthy of a Google Maps analysis. L.A. has also served as a body double for the following cities:

Boston
On Rizzoli & Isles Angie Harmon plays a detective in Beantown, courtesy of the Paramount lot.

Miami
Michael C. Hall’s serial killer character on Dexter was harboring another secret: The Florida-based police headquarters on the Showtime series was a generic office building in Marina del Rey. For roughly a decade Southern California also gave its best Sunshine State impersonation on CSI: Miami. Each week David Caruso sported his trademark sunglasses while standing on the steps of the FAA First Federal Credit Union in Hawthorne.

NYC
The 12th Precinct where Nathan Fillion’s novelist character catches bad guys on Castle is in fact the Los Angeles Theatre Center downtown. D.C. Emily Deschanel and her fellow “squints” on Bones have yet to discover that their Smithsonian-style exterior is the Wallis Annenberg Building in Exposition Park.

What Will Boston’s “Straight Pride Parade” Look Like? People Have Some Ideas