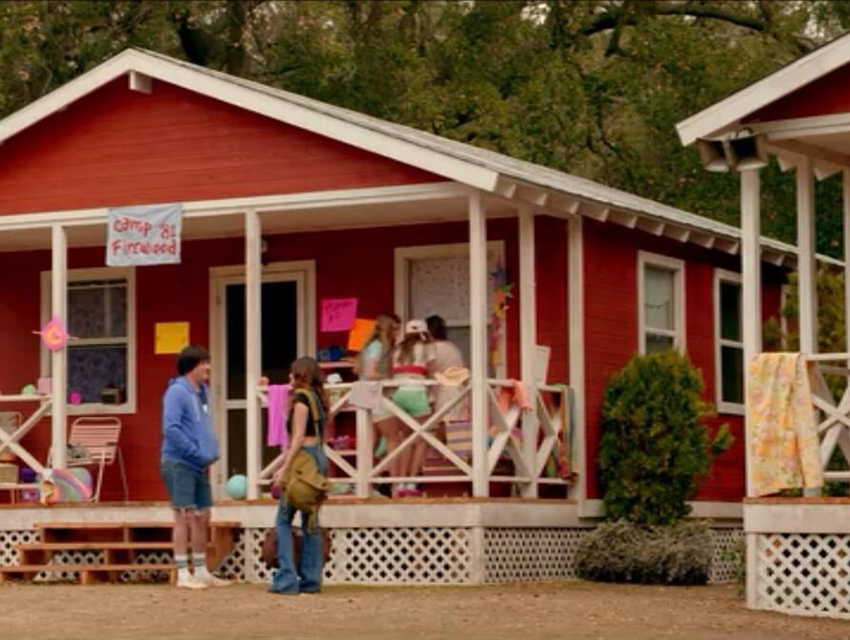 When the satirical teen sex comedy Wet Hot American Summer was shot in 2001, its cast was made up largely of unknowns. Fourteen years later, most of the actors are household names. (Bradley Cooper, Amy Poehler, and Elizabeth Banks, anyone?) So it is fairly incredible that all signed on for the eight-episode prequel TV series Wet Hot American Summer: First Day of Camp, which became available for streaming on Netflix on July 31. This time around, Jon Hamm, Lake Bell, Chris Pine, and Kristen Wiig join the cast.

Wet Hot American Summer, which is set in 1981, centers around a group of teen camp counselor during their last day at the fictional Camp Firewood in Waterville, Maine. The movie was shot at an actual sleepaway camp named Camp Towanda in Honesdale, Pennsylvania. According to Molly Shannon, the original production was so low-budget that the actors had to bunk in the cabins where filming was taking place.

For the prequel, which covers the first day of camp that same summer, producers chose to shoot a bit closer to home, at Calamigos Ranch (327 Latigo Canyon Road in Malibu.)

The 120-acre ranch was founded by Navy veteran J. Grant Gerson and his wife, Helen, in 1947. The Gersons originally operated the site as a year-round Old West-themed children’s camp. Today, the property, which is still owned and operated by the Gerson family, functions as a special events venue and filming location. It was at Calamigos that Kelly Taylor (Jennie Garth) pretended to be Brandon Walsh’s (Jason Priestley) girlfriend during a college retreat in the Season 4 episode of Beverly Hills, 90210 titled “Change Partners.” The ranch was also the site of California University’s 28th Annual Mardi Gras Fair in 90210’s two-part finale titled “Mr. Walsh Goes to Washington” that same season. Other productions shot on the premises include Rizzoli & Isles, Bunheads,The Biggest Loser, Wayne’s World 2, Grey’s Anatomy, The Bachelorette, and The Bachelor.

For the Wet Hot American Summer: First Day of Camp shoot, the red cabins that were featured in the 2001 movie were recreated in a grassy area of the ranch.

Other L.A. locales that are featured in the series include the Rustic Canyon General Store and Grill (2598 Sierra Road in Agoura), Elysian Park (1880 Academy Drive in Elysian Park), and Frank G. Bonelli Regional Park (120 Via Verde in San Dimas), which was utilized for lake scenes.

For those who have yet to check out the series on Netflix, there is no better time than these final weeks of summer. Long live Camp Firewood!