Home TV Scene It Before: Buster’s Coffee from Revenge 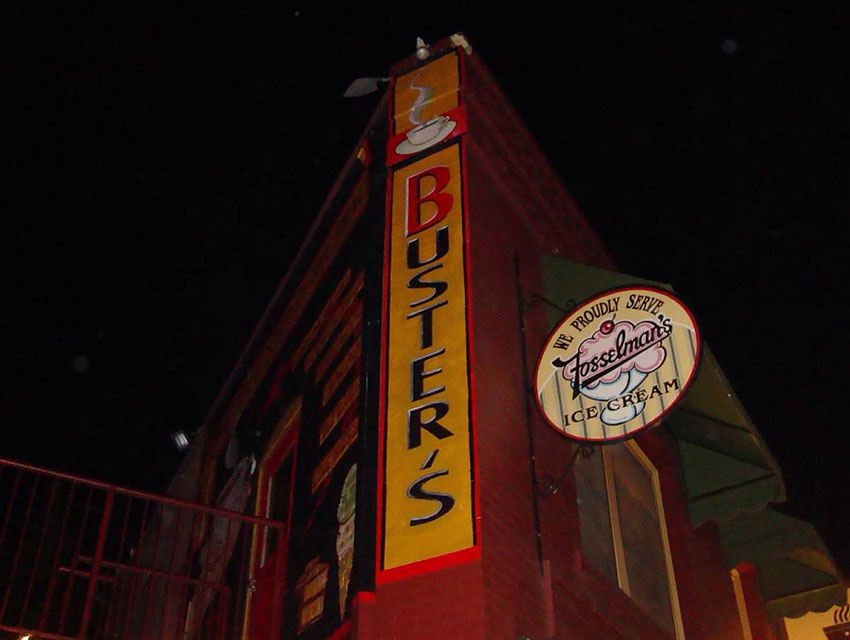 Is it just me or does fall TV seem to be taking forever to get started? The premiere dates of some of my favorite shows are so far out that my DVR can’t even be programmed to record them yet! To curb my impatience, I recently started binge watching the ABC series Revenge on Netflix. One episode in I was hooked. Not only is the show highly enthralling, but its filming locations have me drooling.

I’m especially enamored of the homes where the main characters live on the series. While set in the Hamptons, Revenge’s pilot episode was actually shot in North Carolina. The idyllic beach pad where Emily Thorne (Emily VanCamp) schemes to avenge her father’s death can be found at 6249 Pebble Shore Lane in Southport. Fans of the show will be shocked to see the property via Google aerial views, though, because the Grayson family’s massive Cape Cod-style mansion, situated next door to Emily’s house on the show, is nowhere to found. In reality, the Grayson mansion does not exist. It is a CGI creation based on a residence located at 257 Further Lane in East Hampton. Several digital alterations were made to the Further Lane manse for the show, including the addition of a large turret, a lengthening of the house, and a shifting of the pool location.

Once Revenge got picked up, production moved to L.A. where the interiors of the Thorne and Grayson residences were recreated on soundstages at MBS Media Campus in Manhattan Beach. Several seaside spots are used to stand in for Hamptons exteriors, including Malibu, Manhattan Beach, Marina del Rey (Porter’s Stowaway Tavern and the dock where the Amanda is moored can be found at Fisherman’s Village) and South Pasadena. Yep, despite being far from a body of water, South Pas has passed several times for the Village of East Hampton.

In the Season 1 episode of Revenge, titled “Duplicity,” Emily runs into Jack (Nick Wechsler) and Nolan (Gabriel Mann) outside of Buster’s Ice Cream and Coffee Stop, a South Pasadena staple located at 1006 Mission Street. The café, known by locals as “The Coffee Stop by the Tracks” (thanks to its proximity to the Metro Gold Line tracks), was founded by three sisters in 1986. It originally served as an ice cream shop. Things changed after one of the sisters traveled to Australia in 1990 and saw the popularity of coffee bars there. Shortly thereafter, Buster’s started serving espresso. It has been a regular morning java stop for South Pasadena residents since.

The place is also a popular filming location, having appeared in a Season 2 episode of Law & Order: Los Angeles and in the Season 1 episode of My So-Called Life titled “The Substitute.” For the horror movie buffs out there, the house where Michael Myers lived in Halloween is located just across the tracks from Buster’s and the hardware store where he purchased his mask and knife can be found directly across the street. Everyone else: Don’t let the café’s proximity to those macabre sites scare you off—Buster’s is an absolutely charming spot to grab a cup o’ joe.

My LA To Z: Nick Wechsler