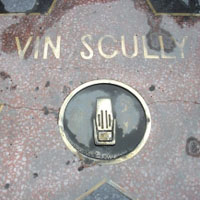 The Dodgers may be going through a rough patch, but they—and Dodger broadcaster Vin Scully—still have their fans. In fact it’s a fan, Glenn Mingay, who has stepped up to help raise $2,500 to pay for repairs needed to Vin Scully’s star on the Hollywood Walk of Fame, which is cracked and showing its age (the star is 30 years old).

When Mingay found out the amount of money the Hollywood Chamber of Commerce would need to repair the star, he established a Web site, savevinsstar.com, and started accepting pledges via email.

“The Dodgers may not be playing well on the field right now; the ownership situation and MLB’s control of the team, along with the Bryan Stow beating have left me and other Dodgers fans feeling helpless,” writes Mingay on the site, “I want to do something that is positive for the team, but more importantly positive for Mr. Scully.”

According to the site, Mingay has raised $345. He says he will direct any additional funds raised to the Bryan Stow Fund.

That’s something Dodger fans can be proud of.