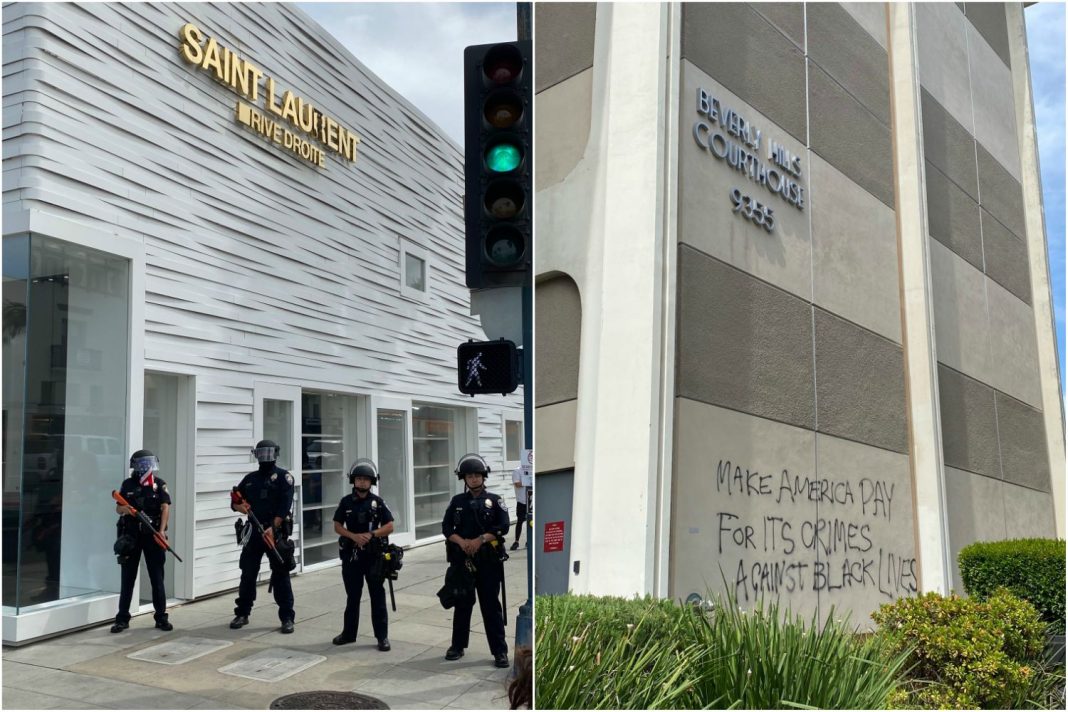 Thousands of demonstrators descended upon central L.A. on Saturday to protest police brutality and demand justice for George Floyd, the Black Minneapolis resident who died while in police custody last week. Floyd’s death—which happened after the now-arrested white police officer Derek Chauvin knelt in his neck for nearly nine minutes—has sparked large protests and gatherings in dozens of U.S. cities this week, even as the nation continues to grapple with the COVID-19 pandemic.

Organizers at Saturday’s demonstration, which was spearheaded by Black Lives Matter, also drew attention to the hundreds of Angelenos who have been killed by police in recent years. In recent weeks, the group has been calling for the defunding of the Los Angeles Police Department, which is slated to receive funds that amount to just under 54 percent of the city’s unrestricted revenue in the 2020-21 city budget, despite that many other departments will face severe cuts.

Prior to the march, Black Lives Matter co-founder Patrisse Cullors addressed the energetic crowd that had gathered at Pan Pacific Park. “We’re living in the middle of an uprising,” said Cullors. “Let’s be clear: We are in an uprising for black life.”

As protestors streamed out onto the streets, they chanted the names of George Floyd and Breonna Taylor, the 26-year-old Black woman who was killed during a police raid of her Louisville apartment earlier this month. Homemade signs read “LAPD = terrorists” and “Jail Killer Cops!” Volunteers handed out medical masks and water bottles to participants.

After marching for about an hour, the procession paused in front of the Beverly Center mall a mile and a half away. Flooding the intersection at 3rd street and La Cienega Boulevard, most protestors took a knee in the street, while others climbed atop the roofs of restaurants and businesses. As police helicopters hovered overhead, the crowd chanted “I can’t breathe”—some of the last words spoken by Floyd, as well as Eric Garner, another Black man who died in the custody of New York police in 2014.

Tens of thousands of folks showed up today in the name of #GeorgeFloyd. #BlackLivesMatter demonstration closed out at 2pm on 3rd & Fairfax.
Folks want us to “condemn the violence.” We condemn the violence committed by police who kill and brutalize our people.

Black Lives Matter said that the official protest ended around 2 p.m., but many demonstrators continued to march. As police officers began to blockade streets, the original group was split up. One group of protesters trekked about two more miles to Beverly Hills, where they funneled into the notoriously upscale shopping district Rodeo Drive around 3 p.m. The facades of luxury storefronts like Gucci and Hermes—many of which had been boarded up in advance—were covered in graffiti that read “defund LAPD,” “The Revolution is Coming!” and “ACAB” (all cops are bastards).

While demonstrators expressed anger at the Beverly Hills Police posted up in front of Saint Laurent and other stores, the protest remained largely peaceful, although an Alexander McQueen store was reportedly looted later in the evening.

Meanwhile, demonstrators who remained in the Fairfax area engaged in a tense, hours-long standoff with Los Angeles police, who blockaded multiple streets. Officers repeatedly opened fire with rubber bullets into crowds, brandished their batons, and released tear gas. At least two police cars were set on fire, several more were vandalized, and a parked Metro bus was taken over by protestors that climbed onto its roof. At least 20 people were arrested, according to the Los Angeles Times.

Returning to the Fairfax area around 6 p.m., I witnessed police shoot multiple rounds of rubber bullets into a gathering of protestors at Hayworth Avenue and Beverly Boulevard, causing some protestors to scream and run. A volunteer medic in an alleyway treated protestors who had been injured. Some raised their hands and chanted “hands up, don’t shoot.” A couple of fireworks were tossed at the police, resulting in small explosions.

As the situation in the area escalated throughout the evening, a number of businesses along Fairfax and Melrose were looted, and one building was set on fire and burned. Several stores at the Grove shopping mall, including Nordstrom and the Apple store, were looted as well.

On Saturday evening, Mayor Eric Garcetti extended a curfew that had been placed on downtown L.A.—where more than 500 protestors were arrested on Friday night—to the entire city, and announced that the National Guard would be deployed in Los Angeles. The curfew was extended to Sunday night.

RELATED: A Countywide Curfew Begins on Sunday at 6 p.m. in Los Angeles