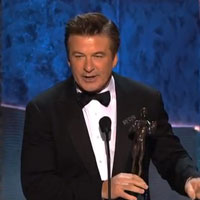 Wedged in between all the award winning and award accepting at the SAG awards last night was news of an impending merger of the two actors’ unions, the Screen Actors Guild and the American Federation of Television and Radio Artists (AFTRA). Many SAG members expressed their support for the merger on the red carpet. Some, like Alec Baldwin, wore “SAG-AFTRA One Union” pins as an even bolder statement. Although many of the actors are for the merger, some have expressed concerns about the effect this would have on health care and pension benefits.

Now that both boards of directors have approved the new alliance, it’s up to the members of the two unions to vote on the proposal on February 27, one day after the Oscars. More than 60-percent of each group must vote in favor of the merger for it to happen.