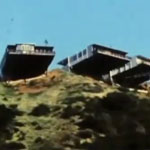 Darren Elms posted this gem of a clip from a 1969 French TV segment on Los Angeles over at Le Franco File late last month. It’s neat to see how landmarks and local attractions like the Hollywood Bowl, the Bradbury Building, City Hall, the Griffith Observatory, and what appears to be the Venice Boardwalk (a sofa chair left out on the sidewalk gives it away) looked nearly half a century ago—not to mention sidewalk wonders like signs for air-conditioned “nude movies”—and the narration of the film’s first-half does a nice job of capturing L.A.’s layout and what makes the city unique. Then it cuts to the (critical) chase: “The people of Los Angeles love to think that they live in the city of the future. But it is rather a city of the present incarnation of past times… If you would like to know what the outskirts of Paris, London, or even Moscow will soon look like, what their problems will be, what is waiting for us, threatening us, you must go to Los Angeles.” Right or wrong, at least it all sounds flattering in French.

Want to watch more French films? The City of Lights, City of Angels Film Festival (COL*COA) begins at the Directors Guild of America on April 15.