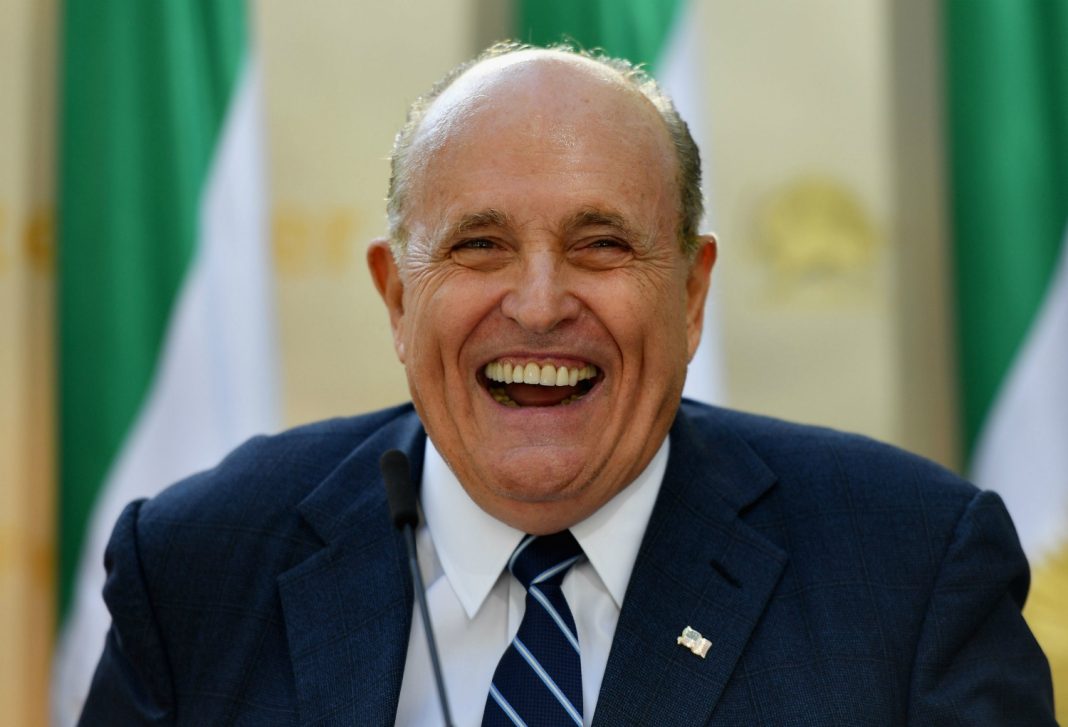 The transcript released by the White House yesterday of the July phone call between Donald Trump and Ukrainian president Volodymyr Zelensky appears to reveal that Rudy Giuliani’s recent claim that he was dealing with Ukraine at the behest of the State Department—not as Trump’s personal lawyer—is not necessarily true. This revelation comes after a week in which questions over Giuliani’s Ukrainian involvement has seen his behavior become increasingly erratic.

On Tuesday, while feverishly reciting his Ukraine narrative on Fox’s The Ingraham Angle, Giuliani warned liberal radio host and Fox contributor Chris Hahn, “I should be suing you for libel,” for doubting his claims.

To which Giuliani retorted, “Yeah, and, um…By the way, did you have any idea that the State Department asked—”

“So then you know the libel laws,” Hahn cut in.

At which point, Rudy exploded.

“Shut up, you moron!” he yelled. “Shut up! You don’t know what you’re talking about, you idiot!”

Rudy then said he wasn’t asked by the State Department to intervene in Ukraine, and then he said he was. Then he demanded that Hahn’s microphone be turned off.

Famously, last Friday, Giuliani spoke to CNN’s Chris Cuomo about his Ukraine games. He said he never asked the Ukrainians about Joe or Hunter Biden, and then blurted, “Of course I did!” All within 31 seconds.

As Raw Story detailed, the internet was quick to express their concerns over Rudy’s wellbeing that very evening.

If Rudy Giuliani’s family loves him, they will get him help now. Not tomorrow. Now.

At this point, you could probably just make up some crazy shit about what Rudy did on CNN and folks would believe it.

“Rudy just took a bite out of a live rat and, blood running down his cheeks, screamed at Cuomo: THIS IS WHAT WE DO TO RATS LIKE BIDEN!”

To say @RudyGiuliani is batshit crazy is truly insulting to bats and shit.@realDonaldTrump https://t.co/vJIjVhr65w

The next day, Wonkette posted a piece called, “RUDY GIULIANI, ARE YOU OK? DO YOU NEED TO FIND A POLICEMAN OR A GROWNUP?”

Questions about Giuliani’s mental health are nothing new since he’s come under Trump’s thrall.

Last August, on the eve of her divorce from Rudy, Judith Giuliani told New York magazine, “The man that he is now is absolutely not the man he was when I married him,” adding that he had developed a habit of “dissembling, to put it kindly […]For a variety of reasons that I know as a spouse and a nurse, he has become a different man.”

That same month, on another appearance with Chris Cuomo, Giuliani contradicted his own public statements—and broke with White House talking points—while discussing whether James Comey would make a good witness for the administration in the Russia probe.

This lead Morning Joe host, Joe Scarborough, to ask, “What are we to make of that? Does he have early onset of dementia? How does he go from yesterday saying he never asked that question, to us of course having a tape where just clearly a couple weeks ago he said that’s precisely what the president said?”

Charged with Fraud by the Feds, Keith Middlebrook Still Claims He Created a Cure for COVID-19