Home Transportation Where the Rubble Meets the Road 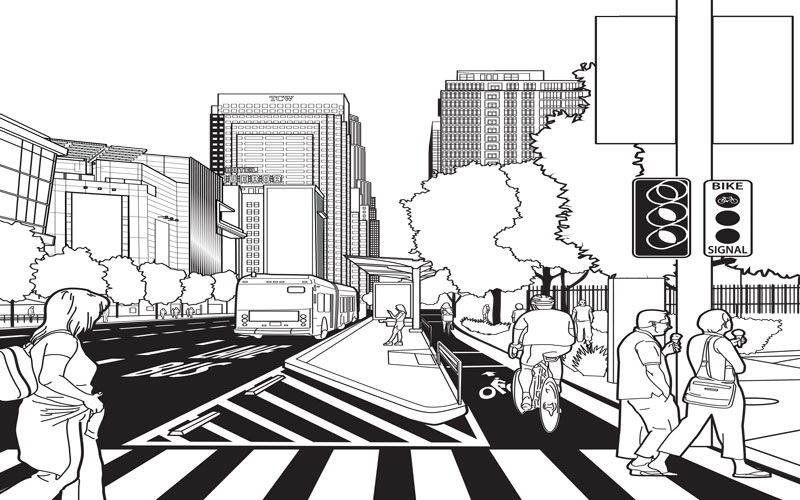 If you want to annoy someone in the city’s planning or transportation department, call the MyFigueroa Streetscape Project a mere bike lane. In many corners of city hall, its June debut will represent the hard-won embodiment of L.A.’s multimodal-transportation future. Yes, the central feature is in fact a bike lane—noteworthy in this car-centric city—but the project is bigger than that. Roughly half of the three-mile lane is protected from vehicles with either median-like platforms for boarding buses or a combination of parked cars and those stubby stanchions known as bollards. Figueroa varies in width, so to make room, portions of it will be losing vehicle lanes, a heretical idea in L.A. Why Figueroa? “It’s a key connection point, especially between USC and some of the major institutional destinations in downtown,” says David Somers with the city’s planning department. “Keep in mind that USC has the highest bicycle-riding population in the city.” Crews will be planting streetlights and trees, too, along the rehabbed sidewalks and “enhancing” a segment of Martin Luther King Jr. Boulevard, the project’s southern terminus. At the northern end, 11th Street between Broadway and Figueroa is also slimming down to accommodate a bike lane as well as wider sidewalks. Drivers feeling jilted can direct their horns at Complete Streets, a nationwide planning initiative that encourages multimodal thoroughfares. City Councilman Jose Huizar, whose district includes part of MyFigueroa, is a fan, noting that car accidents decrease when roads are narrowed. “To say, ‘Hey we’re going to have a Complete Street on one of the busiest corridors in the city’—that’s a huge statement,” he says. Huizar’s already put Broadway on a diet and is close to getting approval for a streetcar to run along a stretch. Our modest proposal for its motto: “You complete me.”