Home Uncategorized Round Peg in a Persian Square 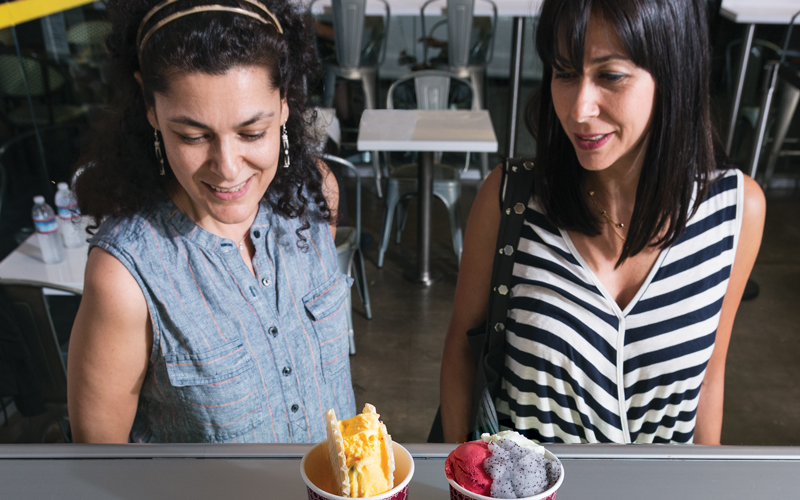 The first time I remember hearing Farsi spoken all around me by people other than my family was in Tehrangeles. It was 1982, and I was four. My family had recently left Iran and settled in the States. But while many other Iranians who fled the revolution were wealthy enough to carve out “Little Persia”—the original nickname for an enclave that covers parts of Brentwood, Beverly Hills, Bel-Air, Santa Monica, and Westwood—the best my adjunct professor father and unemployed mother could afford was a one-bedroom apartment 25 miles away in Alhambra.

Our suburb was predominantly East Asian and Mexican working class, but I actually preferred it to Tehrangeles, where Greek columns abounded, Rolexes and Porsches were essentials, and Armani and Chanel were the uniform. I came to hate the place, which seemed to embody the stereotype of superficial, money-crazed consumerism of 1980s L.A. I felt like we were outsiders, visitors unable even to play rich. I decided to avoid it for most of my adult life, only dipping back in warily when the pang for Persian food got the better of me.

Later I moved to the East Coast and encountered an Iranian community in Great Neck, New York. There wasn’t that gilded veneer—it helped that the ’80s were long gone—but I soon figured out that these Iranians identified mainly as Jewish rather than “Persian.” It’s there that I began to appreciate what I’d seen in L.A., where Iranians were often Jewish, too, but also Muslim, Baha’i, Zoroastrian, even atheist/agnostic like my parents, and where culture—or just the myth of the culture of some Iranian America—trumped everything.

Those qualities (plus the food) helped inspire me to base my upcoming novel in Tehrangeles. So this summer I found myself sitting down to a kabob lunch at Javan with my parents. A classic near Sawtelle on Santa Monica, it features decor more minimal than at most kababis, which tend to resemble the ornate dining room of a McMansion. When I ate there more than a decade ago, it was packed with Iranians; this time the only other people were five teenage girls, All-American blonds, giggling as they tackled every dish like pros. Gone was the bilingual menu, too. When my father asked for one with Farsi on it, the waiter explained, “A year ago we switched to English. I think it was because”—he glanced at the table of girls, then he looked at us, embarrassed—“well, I really don’t know why. Sorry, my friend.”

It made sense that L.A.’s Persian culture had become more assimilated, and yet I realized that part of me counted on Tehrangeles as being a redoubt of sorts, a place where Iranians might expect to find shared culture—no matter if some of it was distorted. So my parents and I moved on: The next stop was in the heart of Tehrangeles—Westwood Boulevard, by La Grange—where Persian bookstores, beauty salons, and cafés line the street. As we bought akbar mashti—the Persian national ice cream made of saffron, rosewater, pistachios, salep, and cream—at Saffron & Rose, the young man at the register spoke to us in Fengilisi, a Farsi-English hybrid. Noticing our confused faces, he resorted to English: “Enjoy your dessert!” He saw the iPhone in my hand and, chuckling, added, “Good for Instagram!”

RELATED: Tehrangeles Is a Hub for L.A.’s Iranian Community (and a Great Place for Persian Ice Cream)

Outside I heard less Farsi than I expected, too. After so many years away—from my parents, from California, from what I first knew as Iranian American culture—I was experiencing an unexpected nostalgia. I couldn’t quite see Tehrangeles like I used to, and while that was a good sign, it also somehow made me feel uneasy.

That’s what was going through my head as we waited for the light to change at Westwood and Wilkins, and the moment I thought, “Good sign,” there it was: I looked up and saw that on every corner of the intersection were signs declaring PERSIAN SQUARE. They had been put up at least six years ago, along with a sign  on the 405—PERSIAN SQUARE, NEXT EXIT—but to me they were new. A wave  of pride washed over me: Tehrangeles  was never a secret, but the designation was never really official, either. It was a place where three-quarters of a million people happened to seek a new life while not entirely abandoning the one left behind. The old portmanteau still works  for me, but “Persian Square” puts it squarely on the map. It had come of age,  I had come of age—the diaspora and I are nearly the same age—and who could argue with that?

Porochista Khakpour is the author of The Last Illusion and Sons and Other Flammable Objects.

Some of L.A.’s Best Kebabs Are Being Grilled Up in a Santa Monica Parking Lot

Tehrangeles Is a Hub for L.A.’s Iranian Community (and a Great Place for Persian Ice Cream)