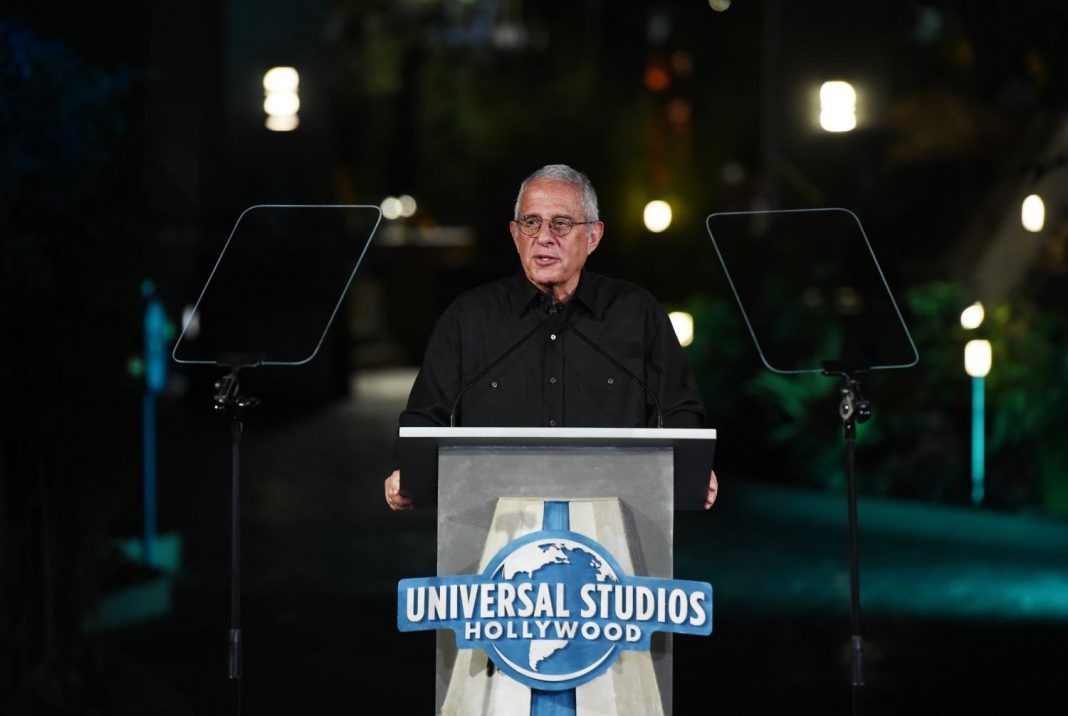 NBCUniversal vice chairman Ron Meyer sent shockwaves through Hollywood Tuesday when he abruptly stepped down from his position, revealing that he’d had an extramarital affair and alleging he’d been extorted for money by someone threatening him.

The resignation unceremoniously ends Meyer’s 25-year run in Universal City, which has seen the well-known and well-liked exec survive multiple ownership changes while serving in high-profile positions, most recently overseeing studio operations and acting as a senior advisor to Comcast.

“I am writing to share some unfortunate news,” NBCUniversal CEO Jeff Shell announced in a company-wide memo. “Late last week Ron Meyer informed NBCUniversal that he had acted in a manner which we believe is not consistent with our company policies or values.”

“Based on Ron’s disclosure of these actions, we have mutually concluded that Ron should leave the company, effective immediately,” Shell continued. “We thank Ron for his 25 years of service, and for his significant contributions to NBCUniversal.”

Meyer, 75, said in his own statement, “It is with a heavy heart that I announce my departure from NBCUniversal.”

“I recently disclosed to my family and the company that I made a settlement, under threat, with a woman outside the company who had made false accusations against me,” Meyer’s statement continues. “Admittedly, this is a woman I had a very brief and consensual affair with many years ago. I made this disclosure because other parties learned of the settlement and have continuously attempted to extort me into paying them money or else they intended to falsely implicate NBCUniversal, which had nothing to do with this matter, and to publish false allegations about me. After I disclosed this matter to the company, we mutually decided that I should step down from my role as Vice Chairman of NBCUniversal.”

According to The Hollywood Reporter, the actress with whom Meyer had an affair was Charlotte Kirk, who was also reported to have been embroiled with former Warner Bros. chairman and CEO Kevin Tsujihara. He stepped down in March of 2019 after texts surfaced that made it appear he’d improperly tried to further Kirk’s career by getting her roles.

Kirk also has worked for an autism charity, according to THR, and is herself on the autism spectrum. The 28-year-old English-born actress’s credits include Oceans 8 and How To Be Single. She also has completed work in the controversial drama Nicole and O.J., playing the title role of Nicole Brown Simpson.

Meyer had his affair with Kirk eight years ago, according to Variety. Kirk would have been 20 at the time, while Meyer was 67.

Meyer indicated in a statement that he felt he had to disclose his problem to Universal after attempts were made to get hush money payments to keep it out of the press. He was in a contract with the studio through 2021, but the studio is actively battling against accusations that it’s a toxic workplace.

“I’ve spent 25 years helping to grow and support an incredible company in a job I love,” Meyer concluded. “It is the people at this company that I will miss the most. I regret what has happened and I am sorry for all the people in my life I may have let down, especially and most importantly, my family.”

Meyer joined Universal in 1995 as President and COO, replacing longtime President Sidney J. Sheinberg, after a long career as a talent agent. He was one of the founders of the Creative Arts Agency (CAA).

Meyer survived another scandal in 2008 when it was revealed that he’d hired Anthony Pellicano, known as the Private Eye to the Stars, to collect a $300,000 debt he was owed by an attorney. Even after Pellicano went to prison and most of Hollywood abandoned him, Meyer remained his friend and visited him in prison.

In 2013, Meyer was promoted to vice chairman, a position in which he gave strategic guidance on all aspects of the conglomerate, including its films, TV projects, and theme parks. In 2015, the year Universal set an industry-wide box-office record of $6.9 billion worldwide, he’d worked closely with Donna Langley and Jeff Shell on the movie side of the business.

From his years as an agent, Meyer has deep ties with many of the top performing and creative talents in show business. As an agent he handled the careers of Tom Cruise, Sylvester Stallone, Barbra Streisand, and Meryl Streep among others. In 2015 he helped bring Steven Spielberg and Amblin back to Universal.

Born to parents who escaped Nazi Germany, Meyer quit school at 15, and at age 17 joined the Marine Corps, serving for two years. He returned to L.A. and got a job as the driver for independent agent Paul Kohner, rising to become an agent himself before leaving in 1970 to join the William Morris Agency. He stayed there until 1975, when he left with Mike Ovitz and others to form CAA, which became the most powerful agency in Hollywood.

As a sources told Deadline, Meyer was known to have vices, like women and gambling. As one source put it, “That’s just Ronny.”