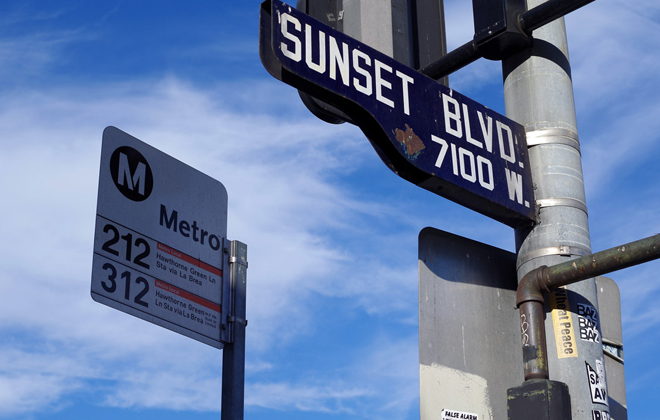 New York City may have a prolific train system, but we have a prolific bus system. Our buses cast a wide net over Los Angeles that allows you to get from east to west or from Culver City to Pasadena in around an hour and a half. Yes, you really can do that. People do it every day!

How? For newbies to the system, figuring out which bus to take where and when might seem daunting. This guide to L.A.’s V.I.B.s (very important buses) is here to help. Read it, use it, and find an easy way to ditch your car.

The 2, A.K.A The Great Connector

Why it’s important: This bus will take you to the core parts of the city. You can get from downtown to Echo Park to Silver Lake to Los Feliz to Hollywood to Beverly Hills to Westwood to Brentwood to Pacific Palisades. One of the many through lines of Los Angeles, it can take you from the eastside to the westside in an hour and some change.
Hop on: You can grab it at any bus stop along Sunset Blvd.
But FYI: You usually have to catch a connecting bus in Westwood in order to get all the way to the PCH. The waiting game you play between buses can be killer.
The alternatives: The 302 is the 2’s Rapid brother. While quicker, the Rapid does have a more limited route and can leave you with quite a walk if your destination is between stops. The 4 is also related (more on that below). There are Red Line connections, too.

The 4, A.K.A The Other Great Connector

Why it’s important: Whereas the 2 takes you on a tour of Sunset Blvd., the 4 takes you on a tour of Santa Monica Blvd. This is important because the 4 will take you into the thick of WeHo and through Century City, into South Westwood and North Little Osaka, and onward into good ole’ Santa Monica.
Hop on: If you are on Santa Monica Blvd., you can catch this bus.
But FYI: The route gets confusing where Santa Monica Blvd. crosses Sunset Blvd. At the juncture, the 4 assumes the 2’s route. If you are headed downtown, that’s great! Double the chances for bus taking! But if you are headed to Santa Monica, be sure to catch the right bus.
The alternatives: If you want to take the Rapid, take the 704. For obvious reasons, the 2 would work, too.

Why it’s important: This local bus takes you down Venice Blvd. at a pretty speedy clip. It also covers a wide range of Los Angeles, giving you views of everything from Palms to Culver City to Mid-City.
Hop on: As long as you are on Venice Blvd., you can catch the 33.
But FYI: It is very easy to miss this bus. There are a lot of buses on Venice Blvd.: don’t just catch any of them, be on the lookout for this one. This bus’ schedule is also very traffic sensitive.
The alternatives: The 733 is this bus’ Rapid brother. Note that you will hit both the Expo and Red/Purple lines on the 33 and 733.

Why it’s important: Unlike other North/South buses, this connector whisks through ‘hoods like Glassell Park, downtown, Chinatown, and Atwater Village. It can also take you to the Burbank Airport and into the depths of Sun Valley.
Hop on: The majority of this bus’ route is along San Fernando Rd. when in the Valley proper. It wanders down Hill St. between 15th and College while downtown.
But FYI: Catching the bus can get confusing downtown where there are so many options. Keep your eyes peeled when catching it! Also, airport buses are notoriously frustrating: pad in extra travel time if you are taking this guy.
The alternatives: The 222 is the 94’s Hollywood cousin and can take you from Hollywood & Highland to the Burbank Airport. The downside is, it comes very infrequently and could cause you to have to hop into an Uber so you don’t miss a flight. The 94 also hits the Red, Purple, and Gold Lines.

Why it’s important: Few North/South lines are as invaluable as the 212. This one will dip you all the way to Hawthorn and pull you back up to Hollywood in an hour and a half. You know how you use La Brea Ave. to speed up and down the city? This bus does that, too.
Hop on: You can catch the 212 anywhere along La Brea Ave., as far north as Sunset Blvd. and as far south as Manchester Blvd.
But FYI: These buses tend to show their age and, like most Hollywood buses, their schedules are easily affected by movie premieres.
The alternatives: The 312 is the Rapid version of the 212. You can easily access the Red Line (in Hollywood), the Expo Line (in Baldwin Hills), and the Green Line (in Hawthorne). That means there are train connections at the beginning, middle, and end of this bus’ route. That’s a nice plus!

Why it’s important: This bus hits all the cool, pretty, Mid-City parts of town and is consistently calm, cool, and collected. The bulk of this bus’ journey is along Fairfax Blvd., which means that you’ll have easy access to hot spots like Culver City art galleries, LACMA and other Wilshire museums, West 3rd St. stores, the Sneaker Corridor between Melrose and Beverly, The Grove, not one but two Whole Foods, the Melrose shopping district, a Bristol Farms, and all of Hollywood. This is the bus celebrities should take to and from movie premieres.
Hop on: One of the very few buses that go up and down Fairfax, it’s an easy target to hit.
But FYI: This bus is very influenced by the goings on at Hollywood & Highland, ergo it is almost always on a detour.
The alternatives: Like the 2 and the 4, the 217 and the 212 follow a similar path once they hit Hollywood. The 780 is this bus’ equally-as-important Rapid sibling; it can take you from Venice Blvd. and South Fairfax to Pasadena. The 218 runs along Fairfax and can take you over Laurel Canyon into Studio City. It hits both the Red and Expo Lines, too.

Why it’s important: You would think Wilshire Blvd. would be filled with buses, but it isn’t. This Rapid is the only bus to take you the full haul of Wilshire, from Santa Monica to Commerce—and it is a reliable one, too. Moreover, there are many important neighborhoods you can drop off in, from Boyle Heights to Beverly Hills and Koretown to Downtown.
Hop on: Just wait for it at a Wilshire Blvd. stop.
But FYI: Like other Rapids, this bus doesn’t come as frequently as you wish it would.
The alternatives: The 20 is this bus’ younger, less useful sibling. You think he’d run all of Wilshire Blvd., too, but instead travels a much more abbreviated route, which is maddening. It hits the Red/Purple Line.

Why it’s important: If you have a little extra time and don’t mind having a bus drop you off at the airport (which is far less stressful than many other options, actually), you should take this bus.
Hop on: These buses are connected to transit hubs, so they are very easy to use. The trick is, you have to get special tickets to ride them. Those are available online.
But FYI: The Flyaway is friendlier to take to the airport than from. But picking you up at the airport is what friends are for.