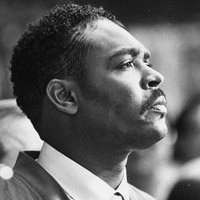 Rodney King, the man whose beating by four Los Angeles police officers and their eventual acquittal sparked the Los Angeles Riots in 1992, has died at 47.

According to reports, King’s fiancée, Cynthia Kelly, called 911 early Sunday morning. Police officers found King at the bottom of the pool in his Rialto home and were unable to revive him. He was later pronounced dead at a local hospital. A drowning investigation is underway.

Born in Sacramento and raised in Pasadena, Rodney King became famous when he was pulled over for speeding on the 210 freeway and then brutally beaten by the side of Foothill Blvd. in March, 1991. The attack was caught on film, and the airing of the footage led to public outrage and heightened racial tensions.

Following the acquittal of the officers charged in his attack and the days of violence and destruction that ensued, King famously called for peace: “I just want to say, can we all get along?”

Since 1992, King had struggled to achieve sobriety, He appeared on reality TV programs like Celebrity Rehab with Dr. Drew and Sober House, but continued to have run-ins with the law. In February he was convicted of reckless driving.

King’s death comes nearly two months after the 20-year anniversary of the Los Angeles Riots, which Los Angeles commemorated with a special issue about Race in L.A. To read more about the Rodney King trials and the riots, plus how the complexion of L.A. and the LAPD has changed, click here.