Home L.A. History WeHo Has Strong Feelings About a Rotating Moose Returning to the Sunset... 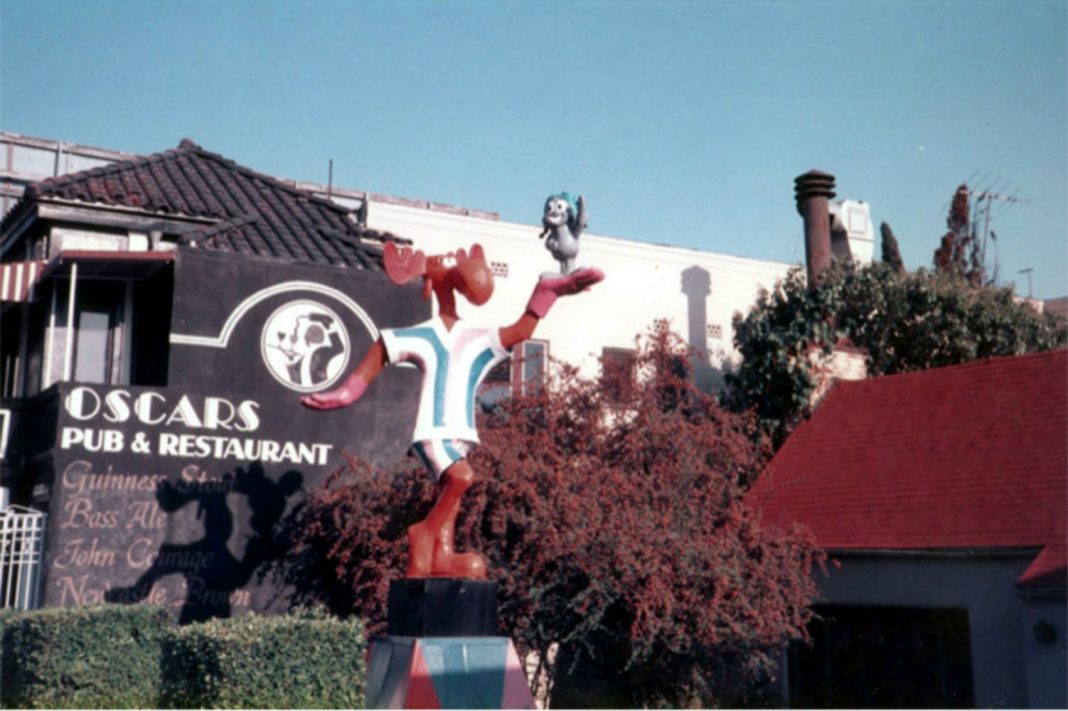 A beloved spinning statue of Bullwinkle holding his friend Rocky was first installed outside Jay Ward Productions’ animations studios on the Sunset Strip in 1961, across the street from the Chateau Marmont. Meant to parody a twirling showgirl advertising the Sahara Hotel, Bullwinkle’s outfit would change colors whenever hers did, injecting a dose of silliness and whimsy into the Strip’s capitalist jousting.

The statue was hoisted away in 2013 to the lament of neighbors and fans, many of whom made their voices heard at a recent, bizarre West Hollywood city council meeting. The night’s agenda? Re-anointing the moose on a traffic island where Holloway and Sunset meet.

First, Tara Strong and Brad Norman, the actors who voice the woodland creatures in a reboot (now streaming on Amazon), did their best impressions of the cartoon duo, begging West Hollywood to let them back into the city.

“On TV, we live in Frostbite Falls, but we were actually born right here in this neighborhood before we made our mark on television!” Strong said. “Let our spirit and the spirit of West Hollywood join together as one to celebrate our collective cartoon history.”

Then the actress Meredith Scott Lynne, who identified herself as Elle Woods’s fellow Harvard law schoolmate in Legally Blond—the one who bragged about organizing a march for “Lesbians Against Drunk Driving”—pleaded with West Hollywood officials to restore the statue to its former glory.

“It just seems like why not? It’s just such a dark scary time where half the country wants the other half of the country on the side of a wall, and then there’s these two characters that make you smile,” she proclaimed to cheers.

Still, there were concerns. Some fretted that selfie-obsessed tourists would be struck by passing cars. “They’re not going to be standing in Dialogue Cafe and taking pictures of his tush,” said Elyse Eisenberg, president of the West Hollywood Heights Neighborhood Association. “For them to take a real picture of it, they’re going to have to stand in the middle of a crosswalk.”

But after a brief deliberation, the West Hollywood City Council unanimously decided that the statue will be reinstalled. The installation will cost around $108,467.

“Well hokey smoke, who would have thought this proud city of ours would bring back something that has been loved by all of the citizens,” exclaimed one resident. “We slowly lose things to development and we lost Rocky and Bullwinkle. But now they’re back.”

RELATED: The Mystery of Where the Sunset Strip’s Rocky and Bullwinkle Statue Disappeared to Has Been Solved at Last!